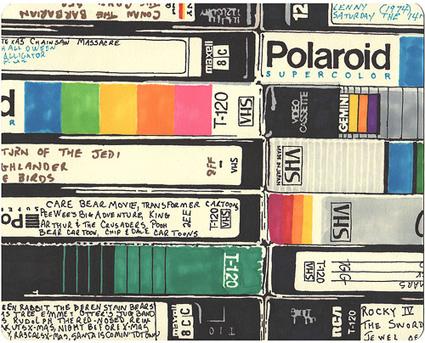 Blah. Terrible. An anthology of horror flicks as horrible as the media storage format they replaced.

There is something creepy about video footage, yes, granted. None of that, none of it improves any of the flicks or the framing device used to situate these short, mostly pointless flicks. The graininess of the footage doesn’t add to the atmosphere at all, it doesn’t improve the terrible framing device, and it also doesn’t make that much sense, honestly.

As this ‘movie’ starts, a bunch of creepy frat boy criminal types commit various crimes and film themselves as they’re committing them. They’re real scumbags, which, in the context of the horror genre, is not a bad thing, because we know that they’ll get theirs in hell, so to speak. These shitbirds are hired by someone to break into a house and steal a video tape, in order to give context and meaning to their constant filming of everything they do.

When they get into the house and start creeping around, they find an old guy dead in front of a bunch of televisions, and stacks of tapes around the house. One moron at a time pops a tape into the VCR and starts watching.

The further conceit is that the movies on the tapes that the shmendricks watch, when we’re the ones really watching the short movies, are ‘real’, as in, found footage. Oh look, I’m not saying these things actually happened; these individual short flicks were ‘directed’ by most of the guys pretending to be scumbags at the beginning of the flick. But the conceit is that the movies were ‘filmed’ by the people to whom these awful things happened.

Most of them are not that good. Some of them have somewhat interesting ideas, but they’re all so deliberately badly filmed (in order to conform with the theme, the aesthetic, or because the people involved were just that incompetent) that whatever inspiration they had is squashed by the production values, or lack thereof.

The first one, Amateur Night, has a bunch of frat guys, one of whom is wearing glasses with a tiny digital camera in the frame, are out on the prowl. They want to meet some ladies, get them drunk and then do nasty things to them. Being arseholes in a horror film, though, guarantees that the horrible stuff will of course happen to them instead. As relieved as I am by that, it’s incredibly hard to watch, not because of any of the content, but because the camera seems like it was in a spin dryer as it was filming what was allegedly going on.

The guy who was watching this first found footage film in the old dead guy’s house disappears, and a different moron comes into the room and pops another tape in, this time being Second Honeymoon. A very boring couple, probably the most boring couple in all of the continental United States, film themselves as they go on the most boring road trip in American history until thankfully one of them gets horribly murdered. It’s literally 99% of boredom, 1% amusing resolution, which doesn’t equal interesting via any mathematics I can think of.

It is, compared to the other ones, better filmed, at least, and didn’t give me whiplash of the eyes. It’s a miniscule consolation.

The third one, Tuesday the 17th, seems like it’s the only one out of the five that could exist as anything other than a short, crappy horror flick in an even worse anthology, even though it’s probably one of the worst of the lot. A bunch of college douchebags go up to a secluded lake where mayhem ensues, and yet even when these awful things start happening to these frat arseholes and sorority drips, someone keeps filming instead of running the fuck away. Also, and this is only a reference that could make any sense to someone who’s been in Melbourne and seen these particular ads the state government ran to convince people not to fare evade on public transport.

This poster campaign featured an image of a form of public transport, with a superimposed scribbled out guy, as if to say that an awful person who doesn’t pay for the trams and trains of this fair city is less than scum, they’re just a scribble, a shitty piece of graffiti, a non-person.

Well, it appears that the next part of their campaign, if I can imagine for a moment that the Victorian government kicked a few bucks into this anthology’s production, thirty, forty bucks at most, is that the Scribble Guy has achieved sentience, and he’s going to be killing people who aren’t using their Myki cards properly or who fare evade without a care in the world.

The biggest problem with Tuesday the 17th is that it’s crap, it’s predictable, it looks like crap, and none of these kinds of slasher parodies / homages are ever necessary since Cabin in the Woods came out. Stop making them, I’m never going to appreciate them again, on any level, even the ironic hipster one.

The Sick Thing That Happened to Emily When She Was Younger is probably the best of the lot, because it features actual actors, and not people who would fail as extras in a Godzilla movie. Emily (Helen Rogers) keeps skyping her boyfriend, and their chats somehow have been recorded onto a VHS cassette tape, but no matter. She is freaked out by some stuff going on in her apartment, and enlists her boyfriend’s distant aid in figuring out what’s going on. What’s going on is not what appears to be going on, at all, and is far nastier than I could have predicted, with a nasty and ironic denouement, especially as it implies that the nastiness will continue.

Sure, it doesn’t make sense, like any of them, that people would be recording any of this shit happening, but we’re meant to accept that the ubiquity of cameras these days, and our seeming obsession with filming every goddamn thing that we see inevitably leads to such outcomes. Maybe the whole enterprise is a heartfelt cry, a cri de coeur against filming everything, relying on our memories instead.

Not bloody likely. The last one, 10/31/98, has the funniest premise, in that the way these Halloween-celebrating chumps accidentally run into more trouble than they deserve was bloody hilarious, but the way everything is filmed is nonsense, and the ending kind of undercuts the point, if there was one.

In case I haven’t made it clear, I did not enjoy this horror anthology V/H/S very much, though I respect what they were trying to do. Some of these directors are paying homage to their own memories of watching these horrifying and blood-draining movies back before the digital purity of DVDs and such, whether they were taped off the telly or from degraded copies of copies of copies, where the horror of the visuals was slightly more horrifying because of the snowy grain that made it even harder to see what was going on.

That’s all well and good, but the immature douchiness of the framing device, the douchiness of the various directors acting like idiots, the shittiness of the camerawork, and the weakness of most of the stories doesn’t get enhanced with that overall signature, faulty, deliberately defective look.

In fact, it made something fairly mediocre a fair bit worse. If the same bits had been recorded properly, without the ‘found footage’ conceit, it wouldn’t have detracted at all, and it never makes sense anyway since who could ‘really’ have filmed the digital footage on whatever modern device and then recorded it onto these shitty tapes from the 1980s even within the context of the film? No-one, that’s who.

The best example of why I didn’t like this film is the following: at the beginning of the flick, the criminal aspiring filmmakers assault a random woman in a car park, raising her jumper to expose her breasts to the camera as she screams. Sure, you can argue that, in the context of a flick where a dozen or so characters are brutally murdered, singling that out as being beyond the pale is a bit rich or PC. But the thing is, I don’t have a problem with the fact that they’re pretending to sexually assault someone, nor am I being PC about it. They’re lovely breasts after all, and despite the fact that it’s filmed in the middle of the day, and the woman, obviously an actor, wasn’t into it in the slightest, clearly she was asking for it. I mean, just look at the sensible way she was dressed.

The problem is one of ugly, dumb immaturity, compounded when the same goddamn footage is repeated and repeated, and then, at the end of the flick, in case we missed what profound douchebags were involved in the making of it, they show the same woman being assaulted in rapid edits something like another thirty goddamn times! We get it, you fuckwads, you're terrible people and worse filmmakers. We understand, for fuck's sake.

You, sirs, are truly shitty people, and I look forward to your next contributions just so I can rip the shit out of them.

--
“You’re all going to fucking die.” – well, aren’t we all, but you don’t have to call attention to the fact, since it reminds us that we shouldn’t waste our lives watching shitty movies – V/H/S