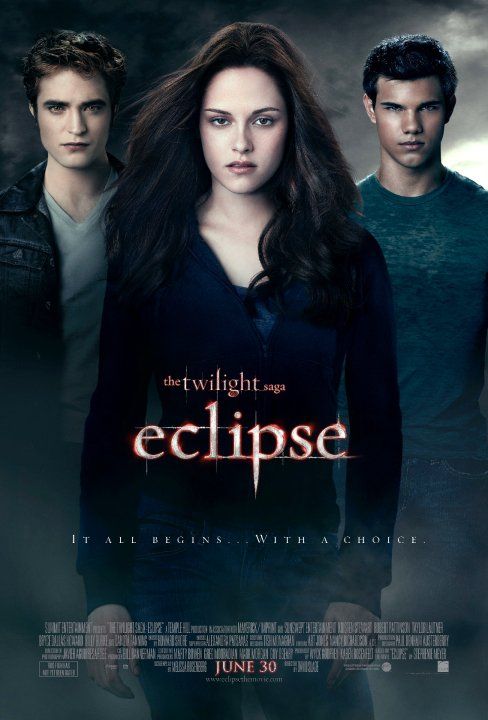 This stuff really is beyond parody, mostly because it's a
parody of the human capacity for junk tolerance already

And the shit keeps on rolling out…

Wow, has it really only been a year since the last Twilight movie? Surely our years and entire lives are now structured around the release of new instalments in this rightly labelled saga? And it is a saga indeed. Epic, if you will, in proportions, length, width, girth, and in precious emotions.

Big emotions. Huge emotions. Bigger than anything you’ve ever snored through in your entire life!

See there’s a girl called Bella (Kristen Stewart) and every boy’s in love with her, because she’s so wonderful, despite not doing, saying or thinking a single interesting thing in her life. She does nothing, thinks nothing, imagines nothing, nothings nothing. She’s such a nothing that four books are devoted to her. Who ever said there was presence in absence was thinking squarely of Bella Swan and Kristen Stewart’s non-acting abilities.

The vampires, who don’t age and who sparkle in sunlight, have the superpower of looking uncomfortable wearing painful contact lenses, and looking very pale. One of them, who is like their king, pope, their Johnny Depp, is Edward (Robert Pattinson). In this universe, looking a lot like the region around north-west Washington state (which is really Canada), Edward is the greatest because he has the most powerful anti-acting skills to pay the bills. Sure, he’s a handsome guy, but it’s the way he can mangle the simplest line of dialogue, coupled with these Tourette’s-like facial tics and pained half-smiles he throws in there for free that really sets him above all the rest.

He has many modes, facial expressions and emotions on call, which he can call upon at will for display with a few day’s notice. He can be tired, sulky, and… and… tiredly sulky? The millions of other expressions he might be able to muster I’m certain were cut out of this flick because the running time was running too long. I mean, those executives insisting on a two-hour cut are idiots. This film deserved to have an at least a five-hour cinematic cut. The clearly intelligent and emotionally well-adjusted fan base would clearly have bought billions of tickets anyway.

When he asks Bella again, like he did at the end of New Moon, to marry him, there wouldn’t have been a dry eye or seat in the house, even if the film had consisted entirely of fifteen hours of Robert Pattinson saying “Marry Me” in different tones and different accents that all sounded the same anyway.

Because that’s all the audience wants. They don’t want the action, and the violence you get in other vampire related genre crap. They want scene after scene of Bella having poorly articulated and affectless arguments with the werewolf and the vampire she’s been cock-teasing for three fucking movies.

And the thing about teasing in a Mormon propaganda, abstinence-promoting genre stealth delivery device is that there isn’t a point reached where the faithful would scream at the screen “Just fucking get on with it already.” Because no-one likes closure.

Of the three flicks, this is the least-worst, only because the editing is a bit sharper, and there are more action scenes, meaning there’s less opportunity for the two males in Bella’s life to simultaneously be telling her in very boring terms why their rival is a shithead and why she doesn’t know what’s really the best for her.

But then, truth be told, the only way is up. They’re all terrible flicks, lacking any of the energy or interest of even the cheapest, basest entries in this genre, in which ur-author Stephenie Meyer introduces fantasy elements relating to the stupid supernatural creatures clustering around Bella the way a bad chef covers the stink of rancid meat by drowning it in gravy. The reason for there being more action in this one involves an army of newly minted vampires who all want to kill Bella.

Why? Well, there’s some kind of revenge element at play, with a vengeful vampire called Victoria (Bryce Dallas Howard) wanting to kill Bella, but really it’s more of the empty and soulless importance given to Bella that Bella doesn’t deserve. Sure, people are dying all over Seattle, and this time it’s not grunge music doing it, but they’re all dying because Bella is so awesome.

Mind you, despite all the action and derring-do and animus being directed towards Bella because of her being the main character, there STILL, even after all this time, is not a single thing that makes her interesting. No action she performs or doesn’t, no choice she makes or avoids, nothing really stands out as showing why she warrants all this lavish attention.

I understand the marketing mechanics of the approach: a blank slate is more relatable for a certain segment of the reading audience, who want to project not just their hopes and dreams onto the cipher, but themselves. The zero to hero template wasn’t invented by a sexually frustrated Mormon author itching to convince girls of the wonders of abstinence.

The brilliant approach followed by these stories is that Bella starts a zero, and stays a zero, even as the ‘passions’ of those around her surge ever higher.

When I say brilliant, I mean retarded, of course. Completely, insanely retarded. It’s like watching Sarah Palin and her family arguing for six hours, only slightly less entertaining in nature and result.

The vampire army marches ever forward, and Bella and her protectors all have to find reasons and ways in which it becomes necessary to force them into sitcom situations with each other, though there is the added joy of hearing Edward wonder aloud whether wolf boy Jacob (Taylor ‘stopping pretending you’re an actor’ Lautner) owns any shirts.

Go sparkle in the sunshine, cold boy. Who are you to mock the living and depilatory?

I think there’s a class / race element behind the sexual tension, but that’s a topic for someone else’s Media Studies masters’ thesis, not for the here and now. The faint ridiculousness of the whole endeavour, and the way in which most of the actors, if they possess enough self-awareness, look embarrassed when speaking, still persists for the other actors around the key participants, but by this stage they’ve all grown into their parts, and they’re a bit more confident about being such goddawful hacks. They’ve been paid well, they’ve been mobbed in the street by Twi-teens and Twi-moms, and presumably Twi-hags and Twi-faghags, and so they’ve reached that dubious level of celebrity that used to be reserved for bit players who had two-second roles in Star Trek or Dr Who, where they can go from sad convention to sad convention for the rest of their lives.

In other words, they’ve lost their capacity for shame, if they ever possessed it. Director David Slade does a better job than the other poor saps who stepped up to the plate and struck out in the face of such terrible material, but whatever skills he possessed for raising the tension (in decent potboiler stuff like Hard Candy) is not really allowed to shine through. He’s here because he made 30 Days of Night a few years ago, which also featured vampires, hillbillies and snow. It wasn’t that good either, but at least he had a freer hand to deal with, unlike the strait-jacket he possesses here due to the sub-human source dross.

If there were moments I enjoyed, it was due entirely to a strange backstory interlude featuring one of the Cullen vampire clan Jasper (Jackson Rathbone) relating his Confederate Army origins, for which, despite never having used a Southern accent previous, he goes all Dixieland on us, and starts using the accent all the time after that. The stuff in Seattle is also somewhat more interesting than this series has usually managed, with a level of menace never previously achieved or really attempted. The whole war – army thing is still bloodless and immature, as if it were a conflict from one of the Narnia flicks, but it’s better than what is usually on offer here.

There’s still no reason not to be creeped out by the 110-year-old vampire who wants to marry a teenager, or the juvenile depiction of sexuality, relationships, men in general and specifically the manner in which this flick posits what the ‘right’ thing for young adults to do is. It’s fucking nuts, but it’s what the people want, so just give them more neutered lions, bread and circuses, I say.

I really look forward to seeing how bad the last two flicks will be, based on the insane tack these books go on in Breaking Dawn, which has material in it that only David Cronenberg or Mel Gibson could do justice to, but we’ll just have to see.

--
“Bella, would you please stop trying to take your clothes off?” - yeah, because your boyish torso will bring up some uncomfortable questions about his sexuality - The Twilight Saga:Eclipse.