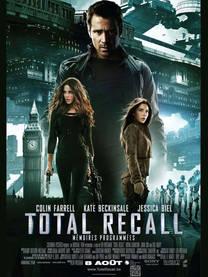 Who dares say this remake is unnecessary? WHO DARES?

And they include the scene with a three-breasted prostitute, so what are you complaining about?

Total Recall, the flick from the early, early Nineties, is not really the classic some are pretending it is. Sure, it’s an Arnie film from before he got too ripe, and it was directed by Paul Verhoeven, someone for whom the words "tasteless misogynist excess" are a badge of honour instead of the grave insult they're intended to be, and it was pretty freaky and entertaining at the time. But it's no 2001. It's definitely on the goofy, trashy side of the sci-fi cinematic spectrum.

It also, like this flick, didn't really have that much to do with the original Philip K. Dick short story it pretended to be lifted from. That story, We Can Remember It For You Wholesale, was a very short story indeed. It also included no more than a depressed guy who goes to a memory implantation place where he wants some fantasy implanted that he's the most Important Person in the Universe. Turns out, the staff of the place realise, he actually is.

And that was it. Nothing about Mars, or three-breasted prostitutes, freeing the slaves or violent divorces. Nothing about mutants or superspy triple agents and defective holographic headgear.

So people hoping to get up on their high horses about this are wasting their time, and their horses. It's just an excuse for an action / sci-fi flick where people run, shoot and fight with people and robots, and then everything's okay in the end.

In some ways, in substantial ways, it's a better flick than the original, but that's not saying much, and it's not saying that it's more enjoyable. It isn't, but it is slick and sleek, and that counts for something (?)

The supreme attraction of any flick that used to have Arnie in it (that's not called Conan the Barbarian, Predator or Terminator) was Arnie. Now, less so, but those were the days, weren't they? Even then, even back when I was a teen, Total Recall seemed pretty crappy to me.

Now, no-one's going to confuse Colin Farrell for Arnie in his prime, but at being a confused looking guy who can run and fight, he's okay. He's not called upon to perform acts of brutality here like Arnie was, in a substantially nastier flick (with an R rating, whereas this one gets by with a PG-13), but he does okay.

Then again, after being in Oliver Stone's Alexander, everything he does since then looks better in comparison. He's not called upon to do that much outside of his comfort zone of looking intense and unshaven, but sometimes that's enough.

There's nothing substantially new about the various elements of premise here, since the look of the film, the components of the film and everything that happens in it seems like it was lifted from a lot of other recent sci-fi flicks. Mostly, it seemed like the director told his staff to give Total Recall a viewing, but to give I, Robot and Minority Report thirteen viewings each. At some points I actually forgot that I wasn't watching those flicks.

I certainly wouldn't. In this story, the setting is the early 22nd century, a time which sees most of the world ruined by chemical warfare and toxic episodes of Glee released into the atmosphere. Most of the world is unliveable. The only places left where humans can live and breath are Great Britain and, inexplicably enough, Australia.

Some would argue that if only those places were left, well, it meant the whole world was a wasteland, but no matter. They never call Australia "Australia", they call it The Colony.

Jesus Christ, will we never get away from that designation? A realm, a fatal shore not fit for anything but criminals and the world's underclass? All the world's remaining hardworking or indigent slobs live in the Colony, the white-bread wealthy types live in the Great Britain Federation. Both cityscapes are impressive, and very different. The Colony is a fearful place where it rains all the time and it's always night, apparently, and it's a mishmash between Hong Kong, the favelas of Brazil and every other dystopic future. You know, just like Blade Runner.

And Great Britain, apparently ruled by a despotic American chancellor called Cohaagen (Bryan Cranston), is all superstructures and imposing shiny buildings way above the 'old' Britain. These two places are separated by more than distance, because the space between them cannot be traversed. You can't fly from GBF to the Colony, because of the stuff in the air between them, I guess (?)

How do they solve the problem of the tyranny of distance? I mean, all those shiny toilets and windows in Great Britain need cleaning, don't they? They needed some way to ship proles from the Colony to where they could work, so they thought of the brilliantest thing possible: Why not drill through the earth, and create an elevator which can move people safely thousands of kilometres in only a bunch of minutes?

Genius! No, wait, it's idiotic, but at least it makes for some 'cool' looking zero gravity moments. It's not worth anyone's time to point out the insanity of what they've got here physics-wise, since without it the plot can't work, but really, it's tremendous. I've had arguments with people on acid whose hallucinations are more likely to come true than this scenario here.

Doug Quaid (Farrell) is a humble blue collar jerk who dreams of excitement and adventure. He's not content with punching the clock and constructing the robotic supersoldiers of the future. He wishes... he hungers for some other reality where he's really some kind of hero. He has a wife (Kate Beckinsale) who seems nice enough (if you like Kate Beckinsale, which I definitively don't), but that's not enough for him. He wants to matter.

He's also plagued by dreams of a better life? A better wife? No, not really, but he dreams of another woman (Jessica Biel, who, let's be honest, is America's answer to the Kate Beckinsale problem, but not a very convincing answer at that) and of the violence that separated them. A work colleague suggests to him that he go to Rekall Inc., in order to live out whatever fantasy he wants. "They're the best memories I've got" he says of fictional implanted adventures, making us wonder what the insidious point is, since he never actually 'had' them, just to get all semantic.

Well, nothing and no-one's going to force me to think. He gets to the appointment after chatting with a woman who has three breasts, something for which there's no reason to exist even within the 'reality' of this flick except as a call-back to the earlier flick. She even tells him she's enough to make him wish he had three hands.

It makes me wish that the people involved had a bee's dick of creativity instead. Mostly, because even if such a woman existed, two hands would still be ample. Because you can touch one, and then the others, you clods. They’re not mutually exclusive.

As one mouth suffices, but that's a completely different point. What happens, completely in alignment with the first film, is that Doug finds out, quite violently, that he might actually be the superspy he dreams of being. He seems to have skills, skills to pay some bills and kill others, and lots of people start attacking him, including his wife, who no longer pretends she finds his anecdotes and musky odours appealing.

The one thing the director, Len Wiseman, of this flick was able to do was to get a performance from Kate Beckinsale that isn't completely boring. She is feral in this, and, I'm not ashamed to admit, great for once in the action genre. What I find most perplexing about this is that Wiseman, who's married to Beckinsale, was completely unable to get a non-boring performance out of Beckinsale in all those goddamn Underworld vampire movies, which he directed as well.

Nah, in this, motivated perhaps by her personal hatred of Colin Farrell, excels as a vengeful harpy who wants nothing more than to beat the crap out of Doug Quaid before she kills him painfully. She's certainly a step up from Sharon Stone in the original, though their divorce isn't as brutal.

They carry over, as well, the idea that maybe this is all happening in Quaid / Hauser's head. The feeling persisted in certain bits of the 1990 one, and its well used here, not to definitively say either way, but just to allow for the possibility that it's all happening in Farrell's Guinness-soaked head.

Jessica Biel is completely pointless in this. When you're out-acted by Kate Beckinsale, well, you're not really earning your pay. She is superfluous and brings nothing any other person couldn't have brought to the role.

This is not a flick overflowing with great ideas, or great quips, acting or humour. It's functional, it moves along at a decent clip, and works better when people aren't explaining what's going on, because the explanations aren't much chop at all. The more they elaborate on stuff, the dumber the whole premise and world they live in seems. Scenes where they're messing with the protagonist's mind, and ours get a little bit of tension served up, but make no sense when you consider what the overall 'twist' is meant to be. If that's the twist, then nothing that happened before makes any sense if the ultimate objective was what it was.

Bill Nighy is in it for a brief period of time. All the kids scream for some Bill Nighy. He plays a rebel leader who's barely in the flick long enough to wonder what he's doing there.

I liked the action sequences, the brawls between memory-less husband and murderous wife, the car chase equivalents, the strange elevator battles, they're okay. They build to the expected explosive climax, with predictable results, but there's enough implied by the ending to keep me happy.

I really didn't hate this as much as I thought I would, and that surprised me. Approached as what it is, as in, nothing trying to compete with 'serious' sci-fi flicks, then it can be appreciated for what little it achieves.

“If I’m not me, then who the hell am I?” – the deep philosophical questions are addressed fully in Total Recall.