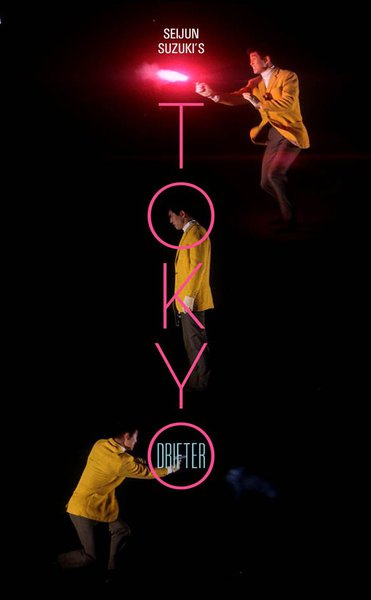 I have no fucking idea what's going on...

What the fuck was all that about?

Tokyo Drifter is cool. It’s cool in the sense that the hero is the hero because he’s cool. He looks cool, he dresses cool, and he has his own theme song, which is played a bunch of times and which he even sings through the course of the film. So what if the flick makes no sense? It’s cool, you squaresville-daddy-o.

The film looks pretty. There’s a very interesting use of colour and sets. The clothing is nice. Other than that, this flick is fucking insane. I wouldn’t recommend it to someone I hated.

Maybe it’s too quintessentially Japanese, but I doubt it. The movie, at the very least, is somewhat more comprehensible than the last one of Suzuki’s that I saw, but that’s not saying much. Made in an obviously cheap and nasty fashion, the flick eschews continuity and logic to construct a story that does not make sense on our planet.

Tetsu (Testuya Watari) is a yakuza gangster who’s really good at looking cool, walking around casually, and being loyal to his boss. When his boss decides to opt out of the criminal game, Tetsu loyally goes along with him, like the dog that he is. Some other gangsters want to screw Testsu’s boss out of the ownership of a building, so some violence ensues. Tetsu doesn’t want to kill anymore, so he takes some beatings. Then he decides he no longer has a problem killing people, so he kills a bunch of people.

That’s about as much of the flick as I understand. Tetsu manfully and heroically strides around Tokyo, then is sent up north, then sent south again, then goes back to Tokyo. Along the way a lot of people try to kill him, especially an obsessed rival called Tatsu (Tamio Kawaji), who becomes disfigured in his quest to kill Tetsu.

Scenes don’t always logically follow on, making large slabs of the flick a sequence of non sequiturs, which I know is a contradiction in terms. Characters appear and disappear out of nowhere. A scene will end, the hero will start casually walking away whistling his theme tune as the theme tune plays, and then the plot lurches up again somewhere else. The plot details are as much a mystery to me as I think they were to the actors, producers, writers, director, key grips and caterers involved in this.

Sure, this could have been deliberate, but I really don’t think so. It’s sloppily put together, and the editing is all over the place, so I don’t think it was a deliberate choice on the part of the maker, though, to be honest, considering his other loony flicks. It’s virtually impossible for me to enjoy this flick as anything more than a strange curiousity from a long time ago.

It is, still, a visually arresting spectacle. It’s also perplexing to try to figure out without research what the hell the director was thinking with some of the stuff he chooses to do. For reasons that will eternally remain mysterious to me unless I pick up a book about Seijin Suzuki, the lunatic director of this chimera, he sets a long brawl in a Japanese bar made to look like a Wild West saloon. Does that make the flick a Western? Is it a comment on America, so close to the surrender that ended World War II? Was it meant to be comedic, ironic, serious?

How the hell would I know… Put in some kind of chronological context, the flick is still too tame to really be called bizarre, and too chaotic to really be watched like most other flicks with plots and stories. That still doesn’t mean it’s an experimental flick at all. Or a particularly enjoyable one.

Watched attentively with an eye to chronology, logic and common sense would be fruitless, but I can see how the flick with be tolerable, even enjoyable to someone who was watching it without caring about such superfluous elements. It might even seem like pure genius to stoned viewers.

Flicks like Tokyo Drifter and Branded to Kill are often said to have been influenced greatly by the French New Wave, but I can’t see it, to be honest. The modish / beatnik fashion sense makes it look Eurotrash of the era in parts, to be sure, but the thematic or artistic elements seem nothing like what shmucks like Goddard and Truffaut were doing before or around that time. It’s possible, just barely possible that Suzuki was just a hack who got lucky by being picked up by hipsters who turned his stuff in cult icons down the track.

It could best be described as something you’d watch if you dropped some powerful acid and watched a few episodes of Get Smart back to back. Maybe that’s in fact what happened, because I think I either flashed back to sunnier climes and festivals past, or the film really is the nutjob experience I think it is.

And then, when all is said and done, the Tokyo Drifter drifts on, all his enemies and even the woman who loves him in his wake. Because he’s The Drifter. And, um, that’s what he does. I guess. Oh Gods I wish I hadn’t watch this film.

5 times this film broke my brain out of 10

--
There is nothing to quote from this flick, are you crazy? I’m trying to spare you my pain, not inflict it anew.