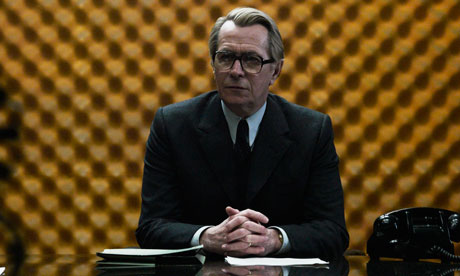 I generally reject the idea, outright, that a really good film could also be really boring, the way a lot of people said about Tree of Life. Not necessarily at the same time, or to the same person, but if a flick is strong, then how can it be boring?

Tinker Tailor Soldier Spy is not a boring flick at all. It’s a great adaptation, and a great looking film, meticulously filmed and acted. Alfredson has filmed this (or at least his cinematographer) as exquisitely as Let The Right One In, with a very different plot but a strong, sombre tone.

I can see, however, that this is probably not a flick that should be watched by people under forty. The visual look of the sixties and seventies depicted here, and the cool, stately scenes, edits and transitions, and the considered, intricate nature of the plot is going to anesthetise audiences hoping for the kind of movie they think of when they hear the words ‘spy thriller’.

This is certainly a thriller about spies, but this has to be at the absolute other end of the spectrum from action flicks like Ghost Protocol or The Bourne Legacy. In fact, a flick like this seems to be mocking them outright.

I’m not personally going to know which kind of flick is closer to the reality of international espionage. From what I’ve read and the many and varied compulsive liars I’ve spoken to over the years, I suspect the constipated, dull, institutional approach is probably the closer to reality. The people you might have met over the years who tell you they’ve worked in the clandestine services (and I’ve spoken to a surprising number of them) tend to be delusional braggarts, the kind of people you assume would have been weeded out in the selection process. The people who really have worked in those capacities tend to look more like non-descript accountants rather than suave motherfuckers in tuxedoes with their guns and cocks out, trying to fuck half the world and kill the other half.

The main character here is George Smiley (Gary Oldman). His performance here is chillier than a bottle of iced vodka frozen in a block of ice inside a freezer which itself has been dropped into a lake of liquid nitrogen on Pluto. I know it’s not literally true, but it seems like he doesn’t talk for the first forty minutes of the film, despite being in nearly every scene. He also keeps his face so completely immobile that it looks like all its nerves have been severed surgically.

He also wears these huge-framed glasses that seem like they were stolen from the corpse of a 1950s Jewish woman who used to run a dry cleaning store. Maybe that’s what he had to do to make his ‘bones’, as they would say in the Mob. He stares at people who speak to him with this unblinking gaze, and at first you’re not sure he hasn’t had a stroke or some kind of cerebral event.

At times he looks completely disassociated, and at others like he’s a coiled snake who’s just waiting, waiting, waiting. Who could wait an eternity for someone to fuck up, which people inevitably always do.

The plot of this film, the very convoluted plot of this film, can be boiled down quite simply to this: there is a traitor amongst those in the top echelons of the Circus, which is the nickname for the Secret Intelligence Service. I assume it’s MI-6, but I can’t remember if it was explicitly stated. As the film begins, after an operation in Hungary goes bad, we see the current head of the Circus, referred to as Control (John Hurt) leaving in shame, bringing along his right-hand man Smiley, who has no shame to leave in, but does seem about as put out as he’s ever going to look.

The men who matter, the ones who look on with glee as the other two men depart are the kinds of people who probably would not be able to organise sex in a brothel, but they do look furtive and malicious, on the most part. Oh, of course their characters have names, and they probably have definable characteristics and singular traits, but all I can really remember about them is who the actors were who were playing them, mostly. There’s Ciarin Hinds, who I can’t remember if he spoke more than once, there’s Colin Firth who looks sweet, gay and agreeable, there’s Toby Jones who still looks like he’s playing Karl Rove again, and some Hungarian twit with a bow tie. The various aspects of who they are or what colour their underwear is subordinate entirely to the problem at hand: One of them is a Soviet spy.

Smiley, still looking like a stunned mullet, is tasked by the government to find out who the mole is. As far as the circle jerkers at the Circus are concerned, Smiley is retired and coasting along in shame, without the British equivalent of a Florida to be shipped off to in order to run out the clock. But Smiley, like a change of direction by the navigator on a supertanker on the open ocean, he may take an age to act, but when he gets going, he will crush everything in front of him.

Since he obviously can’t bring any of the potential suspects into his confidence, he brings in a young chap who can’t be tainted yet by the stain of treason. It’s a gift for us, because that young chap Peter is played by the awesomely named Benedict Cumberbatch. Yes, the pale jerk is wonderful in everything he does, though it’s not a Sherlock level performance.

With Smiley, and with the help of a few other Circus lifers cashiered for having their own suspicions of what’s really going on, these people weave together an intricate tapestry to figure out something that’s just not going to come out on its own, and which is compromising the intel and the lives of countless Brit and even American spies. They’re desperately looking for the traitor amidst their ranks, but the game still is always against the implacable foe that is the Soviets, who clearly were always going to be in power for a thousand years.

The film even has Tom Hardy, without his Bane mouth mask, in a fairly important role, again as someone on the outs with the Circus because of his knowledge regarding the mole, and, if anything, he’s the weakest link in an otherwise impeccable film performance-wise. These are a whole lot of great actors all in the one place, but they’re still subordinate to a fairly dense plot.

They’re all also overwhelmed by the crushing set design, which smothers our eyes with the ugliness on the one hand, and the gaudiness of the other, of the era in which this is set. It’s meticulous and awesome/awful to watch.

Gary Oldman, who everyone has thought is a great actor for decades, doesn’t so much act in this flick as exist. Most of the time he simply seems to occupy space like a person sized statue carved out of dark matter. There’s something quite frightening about his performance here.

His ‘big’ acting scene comes from a whisky-soaked conversation between himself and the young Peter, as he tries to instil in his protégée an understanding of what their opposite number on the Soviet side is like. They’ve codenamed the spymaster Karla, and Smiley’s mournful monologue reveals more about his own profound dissatisfaction with his life that it says about the competing ideologies of the two spy agencies.

It’s a fairly gutting moment, especially when it’s revealed how many moves ahead Karla is at the best of times. He appears on the periphery of many crucial scenes, making it always appear as if Smiley’s never going to get the upper hand.

This isn’t an action film, but there are scenes that get the heart pumping. What should have been a routine meeting with an asset in Hungary turns into a horrible clusterfuck, when Prideaux (Mark Strong) is betrayed by the mole. The build up to the reveal is tension-filled, and the reveal to us that something is wrong is purely visual. When it goes wrong, it goes so horribly wrong.

Despite the lack of violence or action, it’s still a tense affair throughout, with little humour (that isn’t of the gallows variety) to alleviate the gloom. Possibly the strangest and funniest scene involves a staff Christmas party where the employees of MI-6, Britain’s bulwark against Communist encroachment, honour their ideological international opponents by drunkenly singing the Soviet national anthem.

The film builds and builds to a muted conclusion, which is perfect in the context of the material when the mole is finally unearthed in all of his or her or its glory. Anyone would take such betrayal personally, some more than others, but then there’s the added nastiness when the mole reveals what other actions they committed, personally aimed at Smiley, and planned by Karla just to fuck with his head. It’s a raw deal that points to a victory not really being that much of a victory in the end.

It ends in the right place, a perfect place, perhaps, and Smiley ends up where he deserves. Where director Tomas Alfredson was able to use Sweden’s snow to permeate and infuse every scene of his previous horror/love story to give it its iciness, here he uses the chilliness of the characters, the distance between them and real humans with real emotions, to make it such a frosty affair. Some of the characters, like those played by Benedict Cumberbatch and Tom Hardy have real, human emotions, but everyone else is Olympian in their distance and disinterest, especially Smiley.

What a chilly, chilly affair. This flick is definitely not for everyone, because anyone hoping for thrills and spills over people calmly conversing about the defence of the realm is going to be murderously disappointed. But for the patient it has its rewards.

I enjoyed it, and that’s what matters to me, strange little thing that I am.

--
“We are not so very different, you and I. We've both spent our lives looking for the weaknesses in one another.” – time well spent – Tinker Tailor Soldier Spy