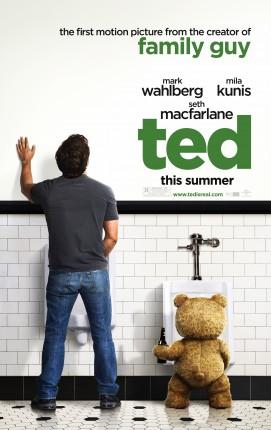 Making awkward conversation while they're at it

Seth McFarlane makes the jump to the silver screen, and the world is so much of a better place for that transition. I mean, before, if you wanted to avoid Family Guy, American Dad or The Cleveland Show, what you had to do was change the channel by expending the necessary energy to press a button on your remote. Exhausting work. In a cinema, however, there is no escape from such McFarlaneness.

A boy (who grows up to be played by Marky Mark Wahlberg with none of the Funky Bunch in sight) exhorts the heavens with a tremendous wish: that the cosmos grant him one friend to alleviate the loneliness that smothers his existence. And the cosmos, or Jesus, or Loki, for some reason, agrees to this pathetic request.

This avatar created by divine intervention takes on a strange but pleasing form, that of an ensouled teddy bear, voiced by McFarlane as well. Is this a problem for anyone? Well, there is a bit in the movie where Ted tells a bunch of people at a party that he doesn't think he really sounds that much like Peter Griffin from Family Guy.

Hilarious in-reference, definitely. Ted sounds pretty much exactly the same as Peter Griffin, with the occasional lapse into Brian the dog from the same show. Ted is CGI, which makes his sometimes reprehensible behaviour both more palatable and more strange as a juxtaposition between his cuteness and his depravity. McFarlane will never in his life be accused of being a subtle motherfucker, and his entire oeuvre is defined by two things: the semblance of politically incorrect transgression, and constant 80s references.

Ted is abundant with both, overflowing with them, and yet the flick ends up seeming, perversely, like a tamer rendering of his television exploits.

In truth, the flick is basically a oft-told contemporary story: guy in his mid-30s is nice but pretty immature and irresponsible, and the love of a good woman (Mila Kunis), or, more importantly, the threat of losing the love of that good woman, will force him to grow up and become a responsible adult. It's the same product of the concept of 'extended adolescence' that gave us such man-child classics as The Forty-Year-Old Virgin, Knocked Up and almost every other movie that's come out in the last ten years, whether they have Seth Rogen, Paul Rudd or Jason Seagal in them or not.

John (Wahlberg) seems like a nice guy, but he's a fuck-up who pulls bong rips at 9 in the morning before trying to get to work late. Ted is an actual entity, as in, the world accepts that he's a walking, talking 'person', but basically he just functions as the fuck-up friend that main characters tend to have in these types of flicks. From there, it's possible to look at him as the part of John's personality that fears commitment, gets bored easily and who aches for excuses to not do his duty. They are still best friends, but there's the whiff of co-dependency between them, even down to their twin terror in the face of thunderstorms.

Lori (Kunis) is loving towards John and barely tolerant towards Ted, but even a fantasy version of a woman has limits. She complains to her co-workers, in between dodging the sexual harassment of her boss (Joel McHale), about how handsome and wonderful her boyfriend is, but how crippled by immaturity as well.

At John's place of work, he turns up late, is usually stoned, and is surrounded by people in general more fucked up than he is. There is an ongoing joke about Tom Skerritt which originates there and culminates at the end of the film with a joke that would be horrifying to anyone who hasn't been exposed to countless seasons of Family Guy. Here, it's of a piece, and is successful or falls as flat as your inclinations would take you.

So, it's not something that take's effort to guess the trajectory of the story, because many of us have lived through something similar, either as the guy upon whom their partner puts the hard word, or the reason for the partner to feel compelled to put the hard word on. I've been both, so, there's that.

So even for something as profoundly immature as this endeavour, it's still meant to be universally relatable. It raises the question of how often it happens, and why it always seems to be the female in heterosexual couples who always has to ask the male to compel their best mate to move out, or for their partner to spend less time getting fucked up with their best mate, and, generally, to decrease the amount of influence the best mate has over him.

The Bible does say that a dog can't have two masters, but I can't help but feel that this is something of a sexist construction. Maybe it's less known for males to be in the position where they're telling their (female) partners to grow the fuck up and pull their socks up at work and play. I've known plenty of women who weren't that immature themselves, and, in some cases, who could put the hedonism of their partner's to shame.

It's just that we've seen this plot line countless times, and regardless of how 'gently' it's realised, its purpose is still to make women look like perpetual scolds and miserly killjoys. Controlling bitches, forgive my French, and it's kind of tired. It's tiring to watch and it bores me, because it's pretty lazy.

Of course, this is a McFarlane flick, so trenchant sociological analysis of such an 'artwork' is utter pointlessness. It's merely an engine for generating gags. I am not a humourless curmudgeon quite yet, in fact I love and laugh at a lot of stupid shit, but I can't say that I really laughed that much watching this.

It's not a horrible flick by any stretch, in fact it's more amusing than I thought it would be, but it's amusing, nothing more, and goes about 15 minutes too long. Not to play semantic games, but amusing isn't that funny. The antics of drunken squirrels and sober politicians are amusing to me, but they don't make me laugh that much. I never laughed out loud at any stage, and pretty much only cracked a few smiles at some of the humour, whether rolling my eyes at the same time or not.

All the faux-racist and pretend-anti-Semitic and anti-Muslim humour McFarlane fans have grown to know and love over the decades is here, though somewhat toned down. Some of those instances of humorousity are funnier than others, many just fall flat. Overall the entire experience comes across as tasteless but not too extreme. Still, I wouldn't take your mother to see it. When it's gross, like when Ted mimes out to a potential sexual conquest what he'd like to do to her, well, it hits the mark. But then he has to pretend to go too far by having a prostitute shit on a lounge room floor, which is neither funny in theory or practice.

Mark Wahlberg barely constitutes an actor at the best of times, but here he's perfectly adequate in the role. He's a good foil for a non-existent CGI buddy, because the unreality of the one matches the fecklessness of the other. We're meant to find him both relatable and sympathetic, so his excesses, compared to Ted's, are meant to be seen as harmless fun. The flick goes a long way to representing him as being in Ted's thrall, up to the point where he's potentially going to blow his 'last' chance with Lori because of Ted's pressure, making it even more explicit that Ted is like an externalised representation of John's compulsive tendencies. Of course then the flick flips it by pointing out that John's still the one responsible for his own decisions and actions, regardless of what Ted says or does, leading to a brutal (and strangely homoerotic) knockdown drag-out brawl between best buddies.

The formative element of John and Ted's lives is, quite lazily, Flash Gordon from the 1980s, and this plays a disproportionate level of importance within the film (both the plot, the cutaway scenes and the other homages) compared to how funny it actually is (which it never is). They've dragged poor Sam Jones out of whatever old folk's home he ended up in, and brought him up on stage to basically shuffle-dance with his pants around his ankles. I felt embarrassed for him in a way I didn't know I could. Thankyou, Seth MacFarlane, for teaching me a new way to feel shame.

The plot mostly plays out in ways people who've never read this review or heard of this film could probably guess, except where it diverges in its last half with a creepy interlude involving Giovanni Ribisi, who only seems to play creepy characters now in flicks. Maybe he always did, I can barely remember. And look at what he did to poor Chan Marshall of Cat Power fame. He tries to do to Ted what he did to her self-respect and her sobriety.

Apparently she's cleaned up now and is doing much better, no thanks to him and his unwashed, frenetic ways. Anyway, it brings this 'magical' flick to its close, as it forces people to make decisions about how they really want to live their lives, and what the boundaries are meant to be between people no matter how much history they share. All wrapped up in a neat, little package.

It's a very slight flick, with some gags along the way, with very little of importance to say on the topic of human relationships, with the potential of being enjoyed. Anyone with an aversion to the aforementioned tv shows need not apply, because they'll hate it

6 times if any of my childhood toys had come to life, my parents would have had me exorcised out of 10