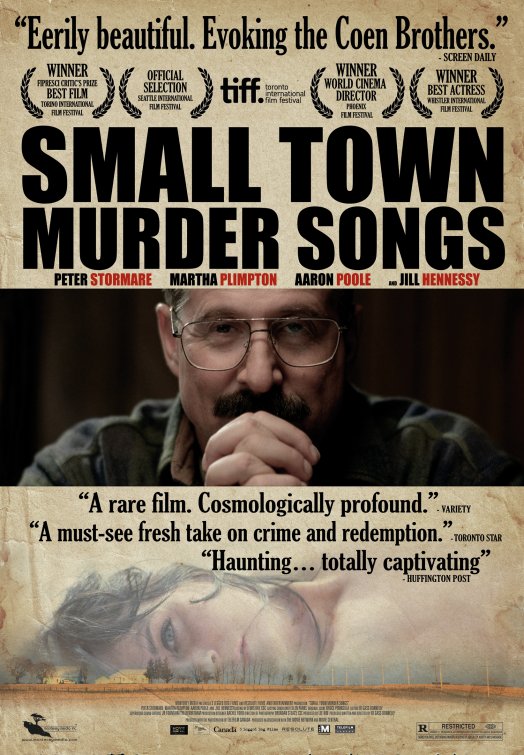 That's some serious policeman's mo you've got going there, Pete

No, it’s got nothing to do with Nick Cave, and it’s not an album. But it is a Canadian film, about a murder, in a small town, and there are some songs.

The songs are great. They’re Great. Genuinely bracing songs, mixing elements of church spirituals, violent percussion, very dark bluegrass (I guess?), and probably a bunch of other influences as well. Imagine the bastard love child of Steve Earle and Nick Cave, sitting in some muddy weeds, crying while toking on a meth pipe.

So the soundtrack, I think we’ve painfully established, is pretty amazing. The Canadian film itself? Perhaps not so much.

The setting is rural Ontario, and the small town is so very, very small. They never mention the population specifically, but it’s probably in the hundreds. It’s such a small town that the last murder was before the time of the current town police chief, being Walter (Peter Stormare).

It sounds, from my description, and that pesky title, that this is a crime movie, a police procedural about a murder, that someone has to solve. It would be a mistake to believe that. It’s a mistake I made. Sure, there are elements of that, but the flick is aiming for something very different.

The town is a strange one, in that it has an old population of Mennonites, who often speak in a German dialect. The film opens with a scene where a car drives past a horse and buggy. So, yeah, it’s kind of like the Amish, except they don’t do barn raising, don’t wear those cool clothes, and they use electricity.

We don’t get much of an insight into the Mennonites at all. For all that it matters to the film, the townsfolk could have been Hindus, Rosicrucians or Scientologists. It does matter in the sense that these are people completely unsuited to the modern kill-crazy world the rest of us live in, and they’re very much opposed to violence, goddamn them.

Perpetual sad-sack Walter is part of this community, or at least was a more prominent member of the community. We get continual allusions to Walter’s wicked ways when he was younger, and there’s constant flashing back to an incident where it looks like he beat the absolute shit out of someone. I didn’t realise it whilst watching it, but afterwards it came to me that the act of violence Walter is committing there and thinking about is actually of more importance than the murder that seems to frame the plot.

The murder of a young woman is just the catalyst for Walter to make amends for what has somewhat ostracised him from the others, and alienated him from his father, who’s a fairly gruff old man.

Characters, mostly police, are constantly referring to London and Washington, but they’re not talking about the capitols of England and DC, respectively, they’re just emphasising how far away they are from the action, even in Canada, even from the other cool, hip places in Ontario. Talk about being at the ass end of the world… And Washington’s a detective, at that.

There’s no connection between this flick and Fargo, or Winter’s Bone, but I couldn’t help but be reminded by some of the elements they have in common. Some of the townsfolk speak in that way that makes you wonder whether it’s just a local thing, or whether they’ve had a stroke. There’s also no romanticising of the ‘small town’ apple pie bullshit that you often get in these kinds of constructions: the people are gruff, grim, not necessarily mean but not exactly wonderful either.

The only reason I was reminded of Winter’s Bone is that one of the characters, being the one Walter has most of his run-ins with, being Steve (Stephen Eric McIntyre), looked like one of those meth addict hillbilly cocksuckers that infest apparently all of the dumber and poorer regions of North America.

I can’t mention Fargo without mentioning that Peter Stormare, as the guy feeding Steve Buscemi into the woodchipper, also played an important role in that film, too. Though he spoke just as little as he does here. He’s not an articulate man, but he does get his point across. He’s an actor I’ve always admired in directly inverse proportion to his abilities as an actor. Here he’s meant to be a sad-sack middle aged cop, and it’s remarkable how easy it is for him to get the look right. Truly amazing…

Apart from a trip to a strip joint, he doesn’t really do much actual police work. The detective sent from the Ontario Provincial Police office in London, being the Washington chap, can’t believe what a Podunk town this fucken’ town is. He can’t believe how backwards they are, or how compromised and incompetent Walter is in conducting or aiding in the conducting of an investigation.

And he’s not wrong, even though it’s not like Walter and the other cops are corrupt or lazy. They’re just too nice and country.

Just ‘cause he grew up in Lancaster, or Hamilton, or Scarborough, he thinks he’s hot shit. Well, fuck him and his big city ways, that’s what I say.

There’s little of that city versus country, salt of the earth versus hoity-toity stuff, because the film isn’t interested in illuminating the urban/rural, teeth/few teeth divide. All it’s interested in showing us is that the town is beautiful but sclerotic in some ways, that it’s religious roots go very deep, that the rest of the world doesn’t really matter, and that Walter’s insides are seething. Though he is mostly hunched up and slow, he’s just a mass of emotions waiting to burst out. His rage is matched only by his sorrow at having fucked up. And his passions for an old white trash flame (Jill Hennessy) just can’t seem to be diverted or defrayed.

Look, I enjoyed it well enough, well, the music at least, and the inter-scene religious titles and the way they darkly portended doings transpiring and such. But I don’t think it’s a particularly strong film, nor do I think it achieves what the makers intend. It looks nice enough, and the performances are decent enough, but the lack of any mystery compromises it. There’s not enough going on in the absence of some sort of compelling investigation delivered compellingly.

Unless I misunderstood where these Canadian types were coming from. Maybe the lack of a procedural approach was the whole point. Maybe, considering how it’s resolved, the murder never really mattered. Seems like a harsh thing to say, though, considering that some poor girl lost her life.

It feels like there’s something missing, and, considering the short running time (75 minutes), that might very well be the case, maybe there’s fifteen minutes of stuff happening that had to be cut out or dropped or some such.

Who knows. At least I enjoyed the music.

--
“Well, it looks like you’re going to have to find out who killed that girl” – who’d have guessed that, in a flick called Small Town Murder Songs