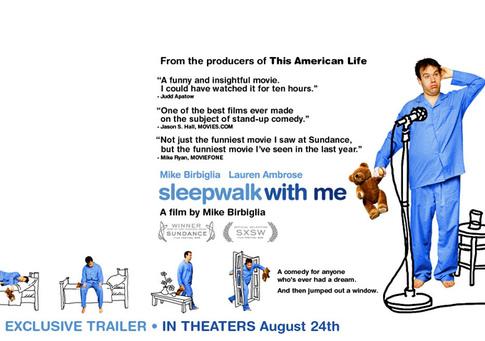 We’ve all got to start somewhere.

This is a curious movie, in that it’s directed by a chap who’s playing himself (under a pseudonym), essentially in a re-enactment of his own life, surrounded by actors. Mike becomes Matt, Birbiglia becomes Pandamiglio, in a pointless charade that’s never intended to shade the truth, or ‘truth’, as the case may be, that This is His Life!

Birbiglia has been dining out on this story for years, and has managed to transform it into the substance of his stand-up (he’s a comedian, in case you didn’t know), a one-man stage show, a book and now a film. I’ve been hearing this story for years, as he’s honed it down to its sharpest edge, from watching Matt doing his routine, hearing it on my iPod and through multiple podcasts essentially saying the same words verbatim. I never tire of the story.

Most of all, I’ve heard excerpts of the story on podcasts from This American Life, probably my favourite of the twenty or so podcasts I listen to with religious, if not disturbing, regularity. It’s a podcast that is the new media version of the radio program from Chicago Public Radio produced by Ira Glass (who of course gets a cameo in this film, as a photographer at Mike–Matt’s sister’s wedding). So it comes as no surprise that they, being WBEZ Chicago and IFC, chipped money in to let Mike transform his multi-format extravaganza into a movie.

This is probably the last version of it, you’d think, until holograms come along. The thing is, or the thing that will seem fairly weird to someone who knows nothing of Birbiglia or his tale is that the story he’s been mining for laughs for close to a decade is a very unique story, a very small story. It only happened to Mike, and no-one else, but, in the telling, like for any decent storyteller, he’s woven it into the fabric of his life at the time and crafted it so it says something more than just about the occurrence itself.

Matt is a struggling comic, who mostly seems to be struggling with the fact that he’s not very good at being a comic. He’s in a relationship with a beautiful redhead (Lauren Ambrose), who forgives his many shortcomings and puts up with his pathetic arse, with the hope that somehow their relationship will lead to something more meaningful.

Matt talks to us directly, into the camera at some points, trying to explain himself to us, but also wanting us to like him. He’s aching for us to like him. There’s almost a vulnerability to the faux-simple way he comes across, as a guy with no meanness in him, no guile, no desire to get one over on anyone.

Yet, there’s a certain piss-weakness to how he stumbles through life, a level of cowardice that he’s not really trying to hide from us in the audience. He wants us to understand, and perhaps not judge him too harshly.

There’s almost a level of masochism in the way he portrays his early forays into stand-up. The crowds aren’t just unresponsive, they’re downright hostile, but the real cruelty comes from his tentative and shambolic portrayals of what it’s like to bomb continuously, without being able to imagine any way out of it, but continuing to go out there to the shittiest gigs with the same shitty material, night after night.

It’s hard to watch that stuff, my propensity for cringing from embarrassment being what it is, but it’s crucial to our understanding of the story, surely. I haven’t even really mentioned the ‘thing’, the ‘event’ that’s the punchline of the whole story yet, but the important thing to see is that the ‘event’, or the problem, is interlinked with Matt’s personal life with Abbey and his stand-up.

Abbey doesn’t really feel like much of a real character, and I guess she doesn’t need to be, really, since just a symbol for Mike-Matt of the actual person she represents, and the problem she represented at the time. She was a problem because Matt is totally piss-weak, and remained in a relationship with her when he didn’t really want to be. Prompted by Abbey, and his parents and friends, it is meant to be seen as inevitable that the two of them get married and start pumping out little red-headed comedians. It seems obvious to everyone but Matt.

You can imagine that this is somewhat stressful for Matt, since he wants the freight train to stop, but he doesn’t want to have to be the one who stops it. This cognitive dissonance, and the looming concept of nuptials and such, contrives to wreck his peaceful serenity and shlubby bonhomie.

Coincidentally (it’s not a coincidence), Matt starts exhibiting some worrying behaviour in his sleep. Apart from just sleep walking, he seems to be acting out his dreams physically, as in, he dreams there’s a jackal in the bedroom, and tries to kick the shit out of it, thinking that it must be in the laundry hamper, and yelling loudly that there’s a jackal in the room. Sure, he seems drunk during these episodes, but I assure you it has nothing to do with it.

So, booze: no. Abbey: yes, in terms of the laying of blame. Oh, of course he never says it explicitly, but you know he blames the redhead. The whole film is screaming it.

At first the implication is that Matt couldn’t possibly commit to Abbey or the whole wedding thing whilst he’s still seen as a failure by his shouty father (James Rebhorn, who always plays angry dads and mean government officials or corporate arseholes), and you could probably cut him some slack for that, since I’ve heard it’s important to some men to succeed professionally before they commit to someone. It seems like it’s a self-serving argument, though, which is what this entire flick is.

Despite the fact that, throughout all these difficulties and psychic agonies that Matt’s enduring, his stand-up isn’t improving, though he’s getting more gigs. He’s travelling around New Jersey and upstate New York and Pennsylvania, doing his inert gags to bored patrons, and it’s all a disaster, until he spends time with a fellow comic who we are meant to see as the slick, top of his game, maestro of the mirthful arts who takes pity on Matt and gives him a few mentor-like tips.

The irony is that this smooth chap is played by Marc Maron, called, lazily, Marc Mulharen in the movie. Anyone who’s listened to any of Marc Maron’s WTF podcasts knows that even if Maron is playing himself here, he is far from the slick superstar he portrays. He’s such a sweaty mess of barely restrained paranoid psychosis that he makes Mike Birbiglia look like a picture of mental health and balance, which he is.

Those scenes work, though, because the implication is that, with Marc’s guidance, Matt finally realises that he should have been using personal stuff in his stand-up all along. Well derr, Fred.

As soon as he starts bad-mouthing his relationship and his family with Abbey in public, he starts getting laughs for the first time in his life, allegedly. Now, he realises that the path to glory is expressing his own misgivings about life, instead of trying to hide them from the audience behind a façade of competence and jokes about sweatpants and pop tarts.

Yet, perversely, the success he achieves in his stand-up results in more work, more travel, more exhaustion, more stress, and doesn’t somehow result in Matt wanting to commit to Abbey. But Matt, you promised! You said, once you started getting some laughs, then everything would be perfect! All the heavens and earths would be in perfect alignment, unified conjunctions, seamless, flawless perfection.

And of course, as he achieves more success, he also gets to notice (yeah right) that the perks of the road include getting to enjoy the perky tits of the road. Great, so now he has guilt to add to his roiling mess of neurological turmoil.

That’s when it happens, and that’s when Matt starts taking his night-time activities more seriously.

What does this all add up too? Well, it’s not the funniest thing I’ve ever seen, and it’s not even that illuminating a portrait of a human being. He’s not even that interesting a human being, really, except for this stuff that happened to him, and the way he transmuted his life into an entertaining story for the rest of us. That’s the most that most of us can ever hope for, the very most. And he does it well. There’s a sadness there as well that I appreciated, a vulnerability which undercuts what could be seen as the more self-serving elements of the whole endeavour. It’s a very low-key, very tiny film, and that’s perfectly in line with its modest ambitions, and with the fact that, hey man, he just wants to tell you a story that you might find funny, and affecting, but mostly funny.

And that’s all I could reasonably ask for.

--
“I'd decided I wasn't going to get married until I was sure that nothing else good can happen in my life” – no-one would ever get married them, chump – Sleepwalk with Me