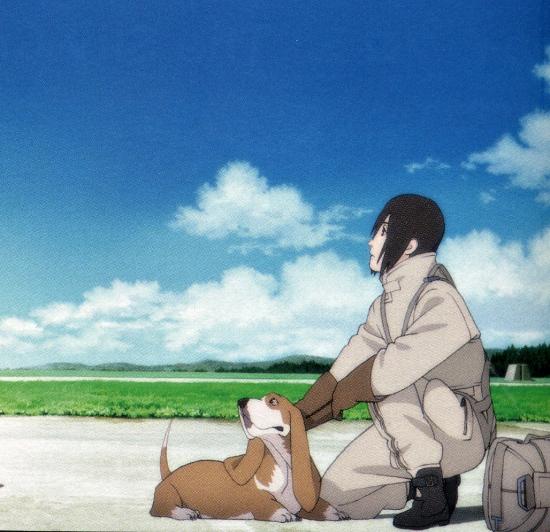 No, my confusion and misgivings go far deeper than that. Even after all my exposure to samurai films, their very odd horror films, hyperviolent anime series based on alchemy, demons and zombies, strange stuff with school girls and even stranger stuff with tentacles going places no tentacles should ever go, I feel I’m no closer than any other outsider to having any kind of even tenuous grasp on the Japanese psyche.

So, you know, I’m as much up the shit creek of not understanding their weirder stuff as the most culturally ignorant amongst you, my blessed readers.

The Sky Crawlers is simple in comparison to any of the other stuff I might have mentioned, but that doesn’t mean it’s any more comprehensible to even someone who would think of themselves as receptive and open-minded. I know what it’s about, and I barely understand it at all.

At an air force base that looks like it’s from World War II, but where the pilots are all Japanese teenagers, and where the planes are propeller-driven but quite futuristic, a new pilot arrives. He ambles and slowly walks around the base, meeting other people all of whom speak in very subdued manners and do very little. What they do they do very slowly. Constant, beautiful, crushingly vast shots of the endless sky dominates the scenery, interspersed with shots of the airfield’s equipment. You know, hangers, refuelling trucks, radar installations, control towers. And a dog, a beagle, I believe.

The new pilot, Kannami, looks perpetually bored and surprised at the same time. His floppy hair flops in front of his eyes, always. He smokes. He meets other pilots, who are also pretty slow except when they’re behind the controls of their planes.

Kannami has a boss, Kusanagi, a tiny female who also smokes. She and the other pilots make reference to the pilot Kannami is replacing.

They are replaced. Kannami keeps wondering about the guy he replaced, and wondering why everyone is so tranquilised, including himself. One of the enemy pilots, whom they call alternately Sky Lee or Teacher, kills almost everyone he faces.

The news, usually playing on the television in the diner where Kannami and some other pilot go to, mentions the outcomes of these battles in the sky, and everyone watches glumly as the statistics are read out.

They don’t seem too put out by it, though. It might seem like two countries are at war, but it doesn’t feel like it. In fact, the world seems pretty unaffected by anything at all.

Very late in the film, not to spoil the direction the story goes, it’s revealed that they’re actually in Poland, but for the life of me, in spite of working that out, I couldn’t for the life of me figure out what it mattered or what difference it makes to anything. And that’s the film in a nutshell. Stuff happens, people meander along or speak dispassionately about minutiae, or perhaps relevant plot points, I couldn’t tell the difference, and then it ends.

To say that I was confused, to use the word ‘confused’, probably doesn’t approximate just what I was going through. I don’t think confusion even approaches the camp at the base of this intellectual Mt Everest this represents, even though there really isn’t that much going on. Yes, there are revelations as to the nature of the war and the nature of the pilots themselves, but even with grasping these fairly basic elements, I still felt a thundering dissonance ringing in my ears.

Most of the problems stem, I think, from just not being able to understand where the makers are coming from. In fact the very attempt to contextualise it in ways that would make it make more sense to me is the first and last step towards failure.

And the best thing is, I’m not even going to be able to explain to anyone else how or why this happens. All I can angle towards is how strange this director is and how different the Japanese cinematic aesthetic / mentality is from whatever my own is.

Choices in storytelling, in direction, in editing, in pacing, matter. They say something about the story you’re watching. It’s probably called temporal aestheticism or something equally film school pretentious. Whatever the technical term is, beyond the mechanics of constructing a scene, whether it’s live action or animated, the way the passing of time is represented tells more than just how much time is elapsing within a scene. Or at least it can.

The thing is the very passage of time in this animated movie, the way time passes, was driving me insane. The fact that I couldn’t understand much of anything else that seemed to have weighty significance beyond the plot (such as an old guy sitting on the step of the diner, the owl tattoo and the very existence of a woman who keeps popping into and out of the story who I think was a prostitute, almost anything anyone says or does throughout the entire two hours of its duration, why the pilots speak in broken English with bad American accents when they’re flying).

I don’t get it, but what I’m saying is, it’s not because it’s a bad film. On the contrary, it’s probably a wonderful, dreamy animated movie that thrills, delights and terrifies the people who can understand it. I am clearly not one of those people.

And I say this as someone who has seen this director’s other movies such as Ghost in the Shell and its sequel Innocence dozens and dozens of times. Those flicks are just as dense and even more infuriatingly off-putting pacing and dialogue-wise, but they’re a joy to watch on a visual and musical level.

This here, well, it’s probably got layers and layers of depth and commentary about World War II and the futility of war / existence / candy-coloured edible underwear, but I’m never going to grasp it. Even if someone explains it to me, I’m not going to be able to feel it.

Sky Crawlers is just beyond me. It wasn’t painful to watch, and it wasn’t totally a waste of time, but it did fill me with this depressing feeling that I’m no closer to understand any part of the Japanese mindset that I was twenty years ago when I first started obsessing about their culture.

Silly, delusional gaijin that I am.