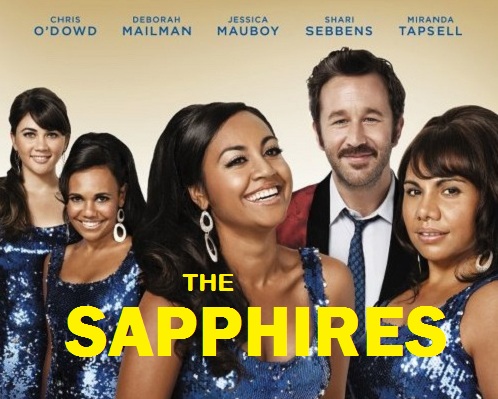 Sapphires by name, priceless by nature

Obscure bits of people’s histories: It’s almost like they happened just to give filmmakers something to make movies about.

I don’t need to be told that this flick is based on a true story, or that it varies significantly from the truthful aspects of the ‘true story’. What matters to me, in this instance, isn’t verisimilitude, it’s entertainment. Australian flicks generally aren’t ever going to be able to get budgets to make something credibly ‘period-piece’ unless it just involves a bunch of people sitting indoors with doilies everywhere and archival stock footage akimbo.

When they do get a huge budget, you get unwatchable crap like Baz Luhrman’s Australia, which was a national disgrace and a true blight upon our history.

Maybe we’re better off with small budgets in that case. I’m sure this flick used its budget well. It looks nice enough, everything’s well shot and in focus, and they had enough money for the music rights to some nice golden oldies from the era. And I hope everyone got paid reasonably well, and that the catering was choice.

They could also afford the time and salary of someone from overseas who, in this case, is Chris O’Dowd, who’s very welcome, at least to me. The film’s called The Sapphires, but he’s probably the star of the film. They couldn’t call it Dave and Some Other People, well, just because. He seems to get most of the funny dialogue, he is the character with the most character, and if he overwhelms the rest of the cast somewhat, well, it's a small price to pay to spend some time in his wonderful company.

If he reminded me of anyone, it was Tom Hanks in A League of Their Own, just with slightly less tobacco chewing/spitting and way less Madonna. He plays the group's manager, whose great ambition, once they hear about it, is to play some tunes and shimmy in front of American troops in Vietnam. During the war! In 1968, no less, when things were anything but pleasant for any of the people concerned.

It's seems like a strange ambition for an all girl Aboriginal pop group from the back of Burke (though they're really from some place that proves unpronounceable to anyone except the girls themselves). For them it's a ticket out of a nice (perhaps too nice) rural existence and the daily humdrum of pernicious and ever-present racism, and the boredom that comes from not performing in front of lots of hot, sweaty African-American men.

The ‘girls’ are sisters and cousins, led by the formidable Gail (Deborah Mailman), who leads them only because she’s the meanest and the oldest, not the best singer. But the other girls have their talents too. The ‘best’ singer is Julie (Jessica Mauboy), who’s also, as far as I know, the only one of the four played by an actual singer. Then there’s the trampy one, Cynthia (Miranda Tapsall), who’s also the ‘funny’ one. Hey, oh, before you think I’m being judgemental or moralistic, hey, back off. The film makes her out to be the trampy one, not me. Her every word of dialogue is PG-rated filth implying how much she wants to bang anyone who isn’t her ex-fiancé, who had the temerity to have cold feet before their non-wedding.

I don’t make these calls, I just enforce them. No, that’s probably not fair. I would hesitate to justify my comments further, since it makes me sound like an Evangelical preacher screaming about Jezebels and fallen women while all the while loving the hookers and cocaine away from the cameras. It’s just the limited way in which her character was framed somewhat irritated me. Though she was a way fun character.

The fourth member of the quartet is the one ripest with the most ambiguity and tension for at least one other member of the girl group. What would a group be without its tensions? These aren’t McCartney/Lennon, Bob Mould / Grant Hart, Scary Spice / Posh Spice types of creative and artistic tensions, they’re about guilt, and denying one’s heritage, and trying to ‘pass’ for white during a deeply racist time in Australian history. It even brings the tragedy of the Stolen Generation into the story, embodied in the person of Kay (Shari Sebbens), who used to be closer than close with Gail and Cynthia, until she wasn’t anymore.

Good thing, too, about the racist reminders of Australia’s past, since with the complete and absolute ending of all anti-indigenous racism nationally which happened a few years ago, I think, it means we sometimes forget what a shitty country this was. Yep, once the Prime Minister of the day made his apology, everything got better instantly and forever for our indigenous brothers and sisters.

Seeing the girls, at least three of them perform their beloved country and western songs at a very shitty talent contest in front of a very dismissive crowd was a reminder that prejudice can be just as blinding as actually losing your eyes in an industrial accident. The difference is that the damage here is self-inflicted. At this contest, they come to the attention of Dave, who seems to be an itinerant, thought at least he has a car, when he hosts the contest. Disgusted by the openly racist ‘judges’ decision, with Judith Lucy playing the publican who delivers the second most racist comments in the film (delightfully, of course), Dave takes them under his wing.

Under his wing, it’s a stinky and clearly unwashed and unhygienic place, but he convinces the girls at least that they’re goal is achievable (of getting to Melbourne to audition for the US Army / USO or whatever it is). Especially he convinces them of the necessity to change genres completely. Yes, yes, they love two kinds of music, country and western, but Dave convinces them that soul is the way to go.

It can’t help but recall a similar speech by a chap with an Irish accent yelling at a bunch of people about how soul is the true music of the downtrodden they should be devoting their lives to, culminating in the hilarious and incredulous “I’m black, and I’m proud” dialogue yelled by the whitest, palest Irishman you’ve ever seen. Yes, I’m thinking of Jimmy Rabbitte in The Commitments. Of course, Dave can’t get away with saying the same thing, since he’s telling this to four Aboriginal ladies, but it’s in the same spirit.

He convinces them that it’s the way to go, and keeps butting heads with Gail, who doesn’t like anyone telling her what to do, and certainly doesn’t think anyone including a manager should be making decisions about ‘her’ group. I won’t say the inevitable turnaround in her thinking towards Dave is inevitable, since there are plenty of gender / racial sensitivities at play here, but they certainly don’t avoid the feel-good path on the way to the finish line.

This is, after all, a crowd pleaser of a movie, and there’s nothing wrong with that. It pleases, it doesn't bore us with depth or significance, it attracted crowds, at least in Australia, and it brings attention to the fact that this actually happened, as in, a group of Aboriginal girls went to Vietnam and sang for some troops in the 1960s.

What I never figured out is why it really mattered. Don’t get me wrong, I’m glad they did it, but I’m not sure I really get what the actual ‘achievement’ was, apart from that a group of girls and an alcoholic went to Vietnam during a horrible war when they didn’t really need to, and did so for money, rather than for any other profound reason.

After a bunch of successful shows, the girls get complacent, and end up being sent across enemy lines unescorted to get to some forward base, and are confronted by some Viet Cong. To this very moment I can’t explain and don’t understand how it is that the girls survived that tension-filled moment, even though other people who understood it have tried to explain it to me, and I still don’t get it.

It’s perplexing, but I guess it doesn’t matter. It’s odd for me that of the performances, the one that didn’t work for me the most was Deborah Mailman’s. I’ve seen her and enjoyed her work in plenty of stuff over the years, even in shows I eventually came to hate (like The Secret Life of Us), but she was the one who seemed to be acting the hardest throughout, which I found jarring. The rest of the cast approached it a bit more casually, and that completely worked for the light tone of most of the proceedings.

The story takes a ‘serious’ turn after the assassination of Martin Luther King which leaves the many African-American soldiers and servicemen despondent and angry. Who could help them grieve? Who can give them the perspective that, in time, their pain and their sacrifices will be honoured by their fellow Americans such that they will enjoy the same freedoms and rights as their lighter skinned brothers and sisters?

The Sapphires. They will heal the hurts, they will balm their souls with a song. It could have been cheesy, and I guess it sounds cheesy, but it’s a scene that works, I guess.

It might have been the best (or at least most successful) Australian flick released last year, but it didn’t really have a lot of competition, let’s be honest. I mean, honestly, Red Dog? The Hunter? The Eye of the Storm? Snowtown? Wait, Snowtown was a way better film, but way too grim. And it didn’t have any dancing and clothes-trying-on montages, so clearly it’s the inferior film.

The Sapphires: the Australian flick even your grandmother will like, even if she’s still a bit racist.

6 times I marvel when there’s an Irish character in a flick, and he’s an alcoholic without fail out of 10