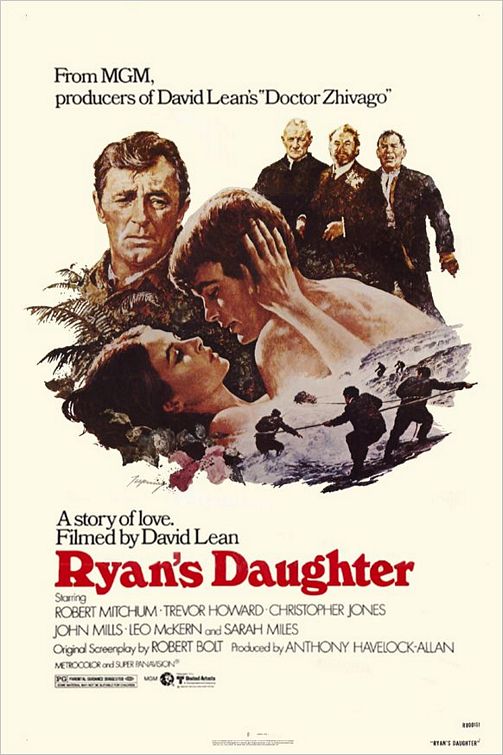 Se, despite the fact that she’s married, and this is Ireland during the World War I, and despite the fact that the English soldiers are hated even more than the average Protestant, she starts an affair with an English officer, Major Doryan (Christopher Jones) within seconds of first meeting him.

So far, she’s not shown to be an idiot (the village already has the position filled with an honest to god village idiot in the form of Michael, played by John Mills), so we are to take it that her good sense is obliterated by her love of cock. And who can blame her?

This isn’t a romantic depiction of small town life, or of the Irish. A lengthy and equally pointless subplot in the story shows the machinations of some IRA goons in their attempts to smuggle German weapons into Ireland in order to fight the British at the same time as the British and French are fighting and dying in places like Verdun, Passchendaele and the Somme.

The villagers are all, with one major exception, all behind the heroic insurgents as they fight their loathsome oppressor/occupiers. When an amazing storm lashes the coast below their village, the entire pack of them scoot down into the unforgiving waves in order to salvage the weapons and explosives. Including, of course, the person who betrays the IRA goons to the English.

Talking about that stuff seems to imply the film really has a plot. It doesn’t really. It just kind of ambles around like an old animal, occasionally sniffing stuff, occasionally marking its territory and then moving on. For a flick that is over three goddamn hours long, not a lot happens.

That’s not to say the flick is without merit or charm. The acting is pretty good, especially Trevor Howerd as the village priest, and Sarah Miles as the strumpet of the title. Mills overacts as only someone playing a village idiot can, and is an overused plot device servicing a story that would otherwise be unworkable.

The cinematography and orchestral score are top notch, almost too good for this flick. The cinematography especially captures some incredible visuals, which are usually little more than the amazing coast of the Dingle peninsula itself and the amazing images of a perfect storm as it lashes the coast and the extras.

And David Lean, best known for the most epic of epic films like Lawrence of Arabia and Doctor Zhivago, really gives this miniscule story everything he’s got. But to what end? He wanted to make a Madame Bovary type story set either in Ireland or India, and found a perfect location, built a village on it, and then wondered what the hell the point of it all was.

Really, you come away from this flick caring nothing for any of the protagonists or the villagers, not caring when one of them commits suicide in an almost comedic fashion towards the end, nor do you care where any of them end up. But it all looks great, and maybe that’s all that’s supposed to be important.

It’s the equivalent of serving cheap and nasty artery clogger burgers on the finest china, to be consumed with the priciest platinum cutlery ever produced. Or, like watching professional athletes trying to do a crossword puzzle.

Or, maybe it’s nothing like that. Maybe all the production elements just seem ‘bigger’ than the story requires. The flick does get a lot of elements right. The nastiness of the townsfolk isn’t completely overdone. They’re ugly in the way that isolated, ignorant communities anywhere can be, regardless of the era. And there’s a lot of storytelling done just with visual cue and imagery. A strong set of scenes has Shaughnessy tracking some footprints in the sand and constructing a likely story out of various visual cues. Another set of scenes heavy with symbolism (perhaps too heavy, to the point of bludgeoning the viewer) cover the wedding and wedding night of the lucky couple, with the prospect of unfulfilling sex looming.

Again, for a David Lean film, I was surprised to see both sex scenes and brief nudity in the flick. Don’t get me wrong; there’s no Kama Sutra catalogue of positions, monstrously engorged genitalia or slippery labia splashed across the screen. It’s just that I have to admit the sexual elements, as in how literal they chose to make it, was a bit surprising to me.

It is possible that the sexual focus of the story is what unnerved critics and audiences the most when the flick came out, since the film was a bit of a turkey at the box office. In some ways (not to do with the battle-fatigued major, since he is a less than two dimensional character with practically no dialogue), the impact of the young lady’s desire for sexual fulfilment on the townsfolk is actually dealt with in a mature manner, which is almost what you would call a feminist take on the way in which horrible people try to stifle the life out of a poor girl with little if any justification.

Rosy’s relationship with her father, the local priest and her husband as well have an appreciable level of complexity. Ryan adores his daughter come what may, and tries his darnedest to protect her from the other hicks. The priest has strange, protective feelings towards her, but isn’t above giving her a slap in the face when the mood takes him. They manage to have a conversation about sex that isn’t as cringeworthy as it sounds.

And of course her relationship with her cuckolded husband doesn’t play out the way we’d expect. Robert Mitchum, who’d made a career out of playing villains and tough guys, brings an unexpected poise and calmness to his role. When he first shows up you can’t help but feel that he’s been horribly miscast, but he earns some goodwill along the way. Rosy, since this is based ever-so-tenuously on Madame Bovary, needs must be punished for her passion, but we definitely don’t feel that she deserves it, even if her blindness towards the consequences of her actions infuriates us.

It’s not a film for the ages, and it certainly sits uneasily within Lean’s legacy of epic crowd pleasers. And its murky politics and sense of history, compared to what was actually happening around the world and even in Ireland at the time, makes it all seem a bit silly. But it’s a visually stunning and well acted pantomime with nothing more important to say apart from the fact that women of loose morals and even looser pantaloons bring joy to the whole world. And that’s a concept I can heartily get behind. Or get in front of, or on top of, whatever it takes.

6 times this story made no sense, but that it didn’t bug me that much out of 10

--
“There's no local crumpet. It's married or virgin here, you know. And that priest down there's got eyes in the back of his head.” – Ryan’s Daughter