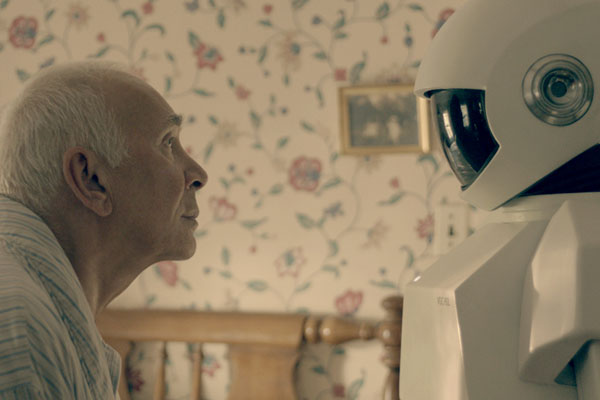 On bended knee, I ask that you marry me, Dear Robot

Films about old guys battling dementia don’t sound like a lot of fun. If you saw that flick, at least I thought it was an actual movie, of Clint Eastwood getting into an argument with a chair last year and losing, then you know how sad it can be.

Really sad. But where there’s inspiration, there’s hope. Someone fairly clever came up with a sci-fi premise that does what the best kinds of science-fiction stories do: they use some kind of presently non-existent technology to tell us a story relatable to the people of today.

Frank (Frank Langella) is a grumpy old bastard, as if there’s any other kind of old guy in movies. The first thing we see him doing is burglarising a house. He’s pretty rough at it, but he knows what he’s doing. As he’s extracting everything of worth through lockpicking and brute force, he spies a picture in a frame, and wonders how a picture of himself as a younger man with his kids has found it into his target’s house.

It takes a while, but he figures out, too late, that he’s been knocking off his own house in the middle of the night.

So, yeah, we get to see two things: he’s a thief by nature, and he’s got some kind of neurological/cognitive issues, especially as they relate to memory.

He has a son who fusses over him (James Marsden), and who visits him weekly, but he has to drive five hours there and five back each time. Clearly there are limits to filial piety. He has a daughter as well (Liv Tyler), whose whiny voice and ethnic clothing makes her the classic cinematic cliché of a trust fund hippie. She fusses from a safe distance, as safe a distance away as Tajikistan, or Kyrgyzstan, or one of the many ‘stans to choose from.

The concerned son, the good son, decides that you can buy your way out of a difficult situation. Money can assuage guilt, it's possible, or at least that's what this film champions as an ideal in life. The son buys the father a robot. It's far enough in the future where robots are now adept at carrying out all the tasks a senile old man and a crafty thief could ever ask for. Frank's not enamoured with the purchase, because, as with most people who are either old or suffering from dementia or both, they deny they have a problem and they at least pretend to resent any attempts towards helping them (while whining simultaneously if you stop trying to help).

The robot, voiced by Peter Saarsgard, looks mostly like a short astronaut, and isn't, for once, a CGI creation. It's too solid, too physical to be otherwise, and a modest flick like this wouldn't have had the budget to do otherwise. There's a real person inside the plastic and metal, in the best tradition of R2-D2, C3-PO, Robocop and Arnold Schwarzenegger. It also, to give it a more contemporary believability, looks very much like that robot invented by Honda called ASIMO several years ago, that, as we speak, instead of planning on how to help old people, is probably calculating how to take over the world with a maximum of bloodshed.

The person inside that robot has to be either super slim, a malnourished Mexican kid or a tiny Chinese gymnast. She's very convincing as this robotic being, even if she is doing the equivalent of miming all the time. The robot never gets a name, but, for Frank's purposes, and for ours as well, seems like a person, with a personality, with the capacity to learn.

This isn't the umpteenth story about robot's rights and attempting to be taken seriously as sentient beings (as a parallel to themes of slavery and emancipation, thank you Robotic Lincoln). The robot, which is easier to call a he despite the obvious lack of gender, is whatever Frank needs him to be. At first, and in the end, he's just a machine that mimics human understanding in an attempt to carry out its primary programming, which is to look after the old man he's appointed to. That takes precedence over everything. So amidst his attempts to get Frank to eat properly, to live in a clean environment, and to adhere to a structured timetable in order to improve his chances of maintaining his tenuous control on reality, Frank slyly convinces him that helping him with his various burglaries will get the cognitive job done.

When Frank figures out that the robot doesn't have any ethical, moralistic or legal programming preventing him from carrying out what the squares out there call 'crimes', Frank is delighted as if he'd just been handed a literal get-out-of-jail-free card. Who wouldn’t be excited by that, especially if you’ve spent much of your adult life in jail?

As much as we get to like Frank, who wavers between being a canny old coot and being pretty much the embodiment of ‘get off my lawn”, there are facets of his character that, while they make him a more complex character, also make him seem like something of a selfish prick. Having spent a lot of time away from his kids when they were growing up makes him regretful, but it also means he’s not above manipulating them or outright abusing their goodwill. I know, I know, we cut slack for old people, and people who are unwell, but that’s no excuse for being mean to them.

There’s an ex-wife that gets mentioned a lot, well, the kids mention their 'mom' a lot, and we know Frank’s alone, but we don’t really get to see much of her. About the only woman close to his own age that we get to see is the lovely local librarian (Susan Sarandon).

You'd think in a setting meant to be a future far enough away from the present that robots will be movie-quality, that libraries will have gone the way of dodos, mullets and video stores. Well, that's a reasonable idea, and the flick trades on it as well. With every further interaction Frank has with her, more and more has been whittled out of and away from the library itself as a local hipster arsehole (Jeremy Strong) converts it into some kind of virtual installation dedicated to the memory of libraries as quaint places what where people looked at purty stuff on paper - hyuck hyuck. We never get to see what this virtual ‘appreciation’ of old world media actually looks like, which is a shame.

The local hipster arsehole stays a factor within this strange and unconventional story, because he keeps acting in a smarmy way towards Frank that both infuriates and inspires him. It infuriates him because older people are naturally infuriated by younger people who are quite irritating. It inspires him because it gives him an excuse to think about planning One Last Job.

While the spirit is willing, the flesh and brain are tremulous and weak. Help is at hand, though, as Frank gets to impart all his skills, all his dastardly knowledge to his new helper robot, who is the willing apprentice Frank never had.

We know the robot's not a person, and we understand what Frank's doing, and that adds a level of poignancy to it, especially since Langella's performance is flawless throughout. It's probably not hard for a grumpy older gentleman to play a grumpy older gentleman, but this isn't a role you could just hand someone like Clint, or Alan Arkin, or Hal Holbrook, or Johnny Depp. We have to believe what he's doing when he imbues his robot helper with more humanity than it deserves, and we have to believe the reasons for it, which I did.

He talks to him like he's a human partner in crime, telling him all the kinds of stories a crim would tell another crim in their prison cell. He sometimes confuses the robot for his son, perhaps seeing him as the idealised version of the kid he never got to know back in the day. All the while, everyone around him is telling him the robot is just a toaster, even the robot keeps reminding him. But the robot is a person to him, and his memories, which plays into the later parts of the story, become crucial both in terms of Frank's conception of the robot as an individual being, and also, in avoiding the long, clammy arm of the law.

The funniest moment for me was when he was demanding that his daughter, who loathes robotkind, not treat the robot like a domestic servant, which she's used over her own objections because of his seemingly crazy actions. You're a real bastard, Frank, but we luv ya all the same.

There are preposterous parts to the movie, and they have nothing to do with the robot, and they come about from the bizarre, almost lazy ways the story uses to get to the finish line it intends. For one, I find it strange that the police would have the victim of an alleged crime sitting in the surveillance van with the officers gathering info on a suspected crim, or that they would get to drive along with them every day, or enter a suspect's home to look for whatever they want. It just seemed strange, and I don't think it points to a future where rich snobs get to ride along with the cops as part of a fantasy pay-for-play scenario. It was, shall we say, dumb as fuck, but it didn't sink the film, because the bits with Frank and the robot were so strong.

The film also has a strange conception of morality, as in, moral justifiability for the actions its protagonist takes part in, and the use and abuse (perhaps that's a strong word) of his family, and the choices he forces upon them that would be a quandary for anyone, let alone these characters. There was a strange bit with the daughter, where he hands her some earrings, giving her some stern advice, which prompts her to say "I know the drill, Daddy", meaning she's used to fencing stolen goods to fund her NGO lifestyle. God love her for it, but it adds a bit of ambiguity to the story, especially as we are left to read a lot into the relationships between the four family members, since it doesn't need to be explicitly spelled out.

I really loved this film, and that's entirely because of Frank Langella, the way the robot was realised and used in the story, Peter Sarsgaard's voice work, and the relationship the makers are able to develop to our benefit. The stuff with the cops etc didn't really dazzle me, but it didn't need to. The last scene between the Frank and the robot even managed to be sweet without being cloying, which I much appreciated.

It’s a nice, quiet, clever sci-fi film, and a nice palate-cleanser after all the blockblusteriness in the lead up to the Oscars. Thank Satan that’s all over with.

--
“Warning: Do not molest me! Self destruct sequence initialised.” – if only I’d thought of that at catholic school – Robot and Frank