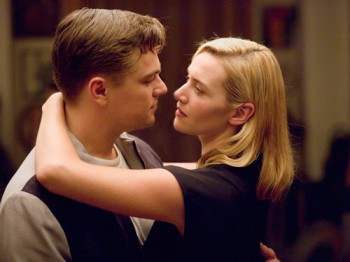 Some things are stronger than love. Like hate,
for example

Based on an apparently classic 1950s novel of the same name by Richard Yates, it’s a film undoubtedly influenced at least in its stylistic elements by the rise of that Mad Men era-philia. In truth, though, this is an earlier era depicted, even if visually they’re indistinguishable. Sure the guys all wear smart suits and those hats, and smoke everywhere, and drink constantly and such.

But this is a time meant to be closer to the end of World War II rather than the cool cat airport lounge hipsterism of the early 1960s depicted in the aforementioned (and admittedly highly loveable) television series. Men and women were still working out what their post-war roles were meant to be, and for some people the answers were never going to be pretty.

The name of the flick makes it sound like it’s going to be a film explaining to kids why they should or shouldn’t have pictures of Che Guevara on their t-shirts, but all it refers to is the suburban road in Connecticut where the unhappily married Wheelers live.

Frank Wheeler (Leonardo DiCaprio) is a big wheel down at the cracker factory, but hates his job and initially hates living in the suburbs. He, like his wife April (Kate Winslet), never planned on living lives of mundane and quiet desperation in the suburbs, but that’s where they’ve ended up, due to pregnancy and marriage in that order.

April bridles under the reality that, being ordinary people, they’re pretty much always going to be living mundane lives in suburbia. Her kids and the sheer wonderfulness of her house don’t give her life meaning or pleasure, they’re just obstacles to her ineffable conviction that some kind of much more ‘real’ life was her real destiny.

It’s clear that she can’t really stand her husband Frank, who, let’s face it, is kind-of pathetic. It’s also clear that he doesn’t really understand anything about what makes April tick, but then much of what he thinks we’re supposed to think renders him a product of his time, whereas April is almost a contemporary woman trapped under the virtual sharia law of the 1950s.

It’s unclear as to whether we’re supposed to relate to either of them, but I guess it’s not impossible to sympathise with them. Frank, for no initial reason we can fathom, cheats on his wife, but does so in a pathetic, half-hearted manner, insecurely bedding a typing pool secretary he doesn’t even seem to really like.

Later on we’re given the impression that he cheats just to bolster his flagging sense of himself as a real man. It’d be more forgivable if he just fucked because he liked fucking, or if she was particularly desirable or energetic, but it doesn’t seem to be the case.

In fact sex or its lack doesn’t really seem to be their problem. We are given the clear impression, through flashbacks, that April feels powerful desire for Frank whenever he’s talking big. At a party where they first meet cute (and presumably fuck like crazed weasels afterwards), she listens to him talking about his wartime service at the tail end of WWII, and his days in Paris, and desire is written all over her face.

Not just desire itself for the man that he his (apparently, women in general seem to still find Leonardo DiCaprio fairly attractive), but for this vital, burly man he could be, like a cross between Henry Miller, Jack Kerouac and Johnny Depp. Whenever he starts talking big, it’s that guy she gets wet for. When he’s talking big, about ‘really living’, she is enthralled and enraptured.

But the guy who gets her knocked up, who she marries and moves to the suburbs with, despite his movie star looks, is just a regular shmo. He’s just a mundane guy, who wants nothing more from his life than a well-regulated suburban household, a docile and accessible wife, and assurances that he’s good enough in the scheme of things. Plenty of men would relate. Hell, there’s probably a stack of women that would relate, too.

People, especially a lot of stupid people, have made the mistake of thinking the point of the flick is that suburbia sucks and that marriage, the institution, destroys people. Nothing could be further from the truth, at least insofar as this flick is concerned. It’s not saying anything about any couple from the 1950s apart from the Wheelers. The Wheelers are doomed because they should never have married and had a family in the first place. Not that people shouldn’t marry and breed, but just that these people were never going to work together.

A pronounced difference in expectations can destroy the best of us, let alone some fictional but attractive couple in a book or film. She only ever wanted to live a special, bohemian, extravagant life, hoping desperately that she’s not just one of the mundane masses. She gets trapped in the same way that most women used to get trapped into a role they never intended to play: mother and domesticated wife through the magic of pregnancy.

That captivity, that lack of um, what’s the word I’m looking for, um, oh yeah, safe abortions, is an unavoidable elephant in the room. It’s an elephant so huge that it looms over and finally crushes the story under its weight. It’s impossible to see April’s helplessness as an American woman in the 1950s (pre, um, what’s that landmark court ruling, oh yeah Roe vs Wade) without seeing that her choices and their outcomes were never fair from the start.

Well, yes, and that would be okay, except for the fact that he’s happy to use these trappings of the middle class to literally trap April within. And so he bears as much responsibility for what happens in the end as April does.

The acting is, from beginning to end, of the swinging for the bleachers type, which means it was clear to me from scene one that they’re all practically demanding Oscars for this stuff, all of them being the unholy triumvirate of Leonardo, Kate and her director husband Sam Mendes. That’s not to say the acting suffers: the acting is fine, and the supporting cast does a tremendous job of supporting these main titans tearing away at each other until practically nothing is left.

None of it means the flick is enjoyable to watch. It’s not. It’s as uncomfortable as any time you’ve been hanging out with a couple who start screaming at each other over who spilled the salt, degenerating into even louder screaming about who’s frigid and who got drunk and embarrassed themselves in front of the bishop fourteen years ago. Not only is it all that, but you’re also trapped in this claustrophobic elevator of a film with that couple for two fucking hours. It’s dramatically valid, and it’s well crafted, but good goddamn is it torture.

Adding spice to the mix, and also an external stand-in for us the audience within their world of hurt to berate them the way we might want to, the crazy character of John (Michael Shannon) exists only to further enrage the primary couple. He’s very funny, very biting when he’s telling Frank and April what we can see as well, but good goddamn does he overact all over the place. It was the kind of performance you hired Joe Pesci for in the 90s, or Nic Cage for these days; someone who can overact so much that time and space seems to bend around the actor, grinding everything to a halt.

It’s particularly galling considering the character’s mental health problems are supposed to give him these almost all-seeing powers to be able to peer into Frank and April’s lives in a way that makes up for the fact that no-one could possibly know the things he does, except for us poor viewers in the audience.

I can’t say that I enjoyed it, but I did find it interesting. It works less as a treatise on the status of women back in the golden days of the mid 1950s, than just a representation of how an incompatible couple shouldn’t ever been formed.

The scariest thing, though, is that even with everything in the flick amped up melodramatically, their arguments are arguments most couples will probably have if they stay together more than a few months of their lives. The same fucking arguments, the pathetic compensations, the same fundamental miscommunications, the same delusions, the same desperate hope that you’re entire existence isn’t a cosmic joke emphasised by the arguments over money, or shitty jobs, or bills, or getting a bigger house…

--
“Hopeless emptiness. Now you've said it. Plenty of people are onto the emptiness, but it takes real guts to see the hopelessness.” – Revolutionary Road.