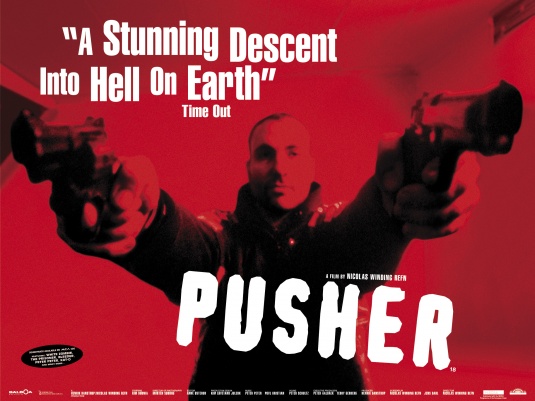 This is unpleasant and these are not nice people, shock horror

There was an explosion of drug films after, I dunno, some indeterminate point. Probably after Trainspotting, I’d say. Whatever and wherever the origin point of the renaissance in this nasty genre was, the one thing we do know is that even the Danish needed to get in on the act.

Now, I have to admit a certain amount of ignorance about Denmark. I know vaguely where it is, I imagine it’s very cold there, but I had this ridiculous idea that it was some kind of idyllic winter wonderland that would delight Hans Christian Anderson himself, what with his tales of naked emperors and little mermaids, even today.

Imagine my horror when Copenhagen is revealed to be as grimy and sleazy a place as everywhere else.

Pusher, part of a series of films that screened as a retrospective at the 2006 Melbourne Film Festival, is an ugly, grim, vicious film about drug dealing in Denmark’s capital. There’s isn’t a single sympathetic character in the whole film with a single redemptive quality.

None of that prevents the film from being somewhat entertaining.

Pusher represents drug dealing as anything but cool or sexy. It’s shown as the trade of desperate and amoral sociopaths who would feed each other through a meat grinder alive if there was a kroner in it. That was their currency prior to the Euro, in case you’re wondering whether it’s the beer I’m referring to.

Frankie (Kim Bodnia) is a low-level drug dealer scrambling to make a living. He has multiple deals going at any given time, and always has an ear open for anything else in the offing. Though goddamn ugly, he seems to have a thuggish ease with which he carries himself through life.

When not dealing, which initially only represents a fraction of his time, he spends the rest of his time drunk and coked up, hanging out with his practically retarded friend Tonny (Mads Mikkelsen). They routinely talk about whatever crap pops into their addled heads, most of which is banal, much of which is crude. Much of the dialogue here sounds and feels improvised, which adds to the impression that you’re eavesdropping on a real conversation between two morons.

Frank bumps into a Swedish guy who wants to score a lot of drugs from him, and quick. The lure of a hefty payday compels Frankie to get a lot of stuff on credit from another dealer, Milo (Zlatko Duric), who he already owes money to.

Let’s just say that, for films of this type, nothing really interesting would happen if all these deals and all the transactions between participants worked out properly to everyone’s satisfaction. Dealers and their underlings aren’t known for their honesty or stick-to-itiveness.

When events go awry, Frankie takes increasingly desperate measures to save his own hide. These measures take us across a city that is made to look as ugly and grim as the worst kind of slum but still recognisably first world country.

It’s an incredibly ugly life depicted here, and whilst there’s a bit of humour in the flick, most of it is of the dark variety. The director clearly wants to represent Copenhagen as it really is for some people, since the locations used and the grime there don’t look like a function of set design or CGI: it looks like he just found places that look awful and plonked the camera down.

Though nothing about this world is glamourised, not even for a second, the director possesses a great deal of style in depicting it. The budget could only have been fractional, but he goes a long way in capturing a kinetic energy that the film probably doesn’t deserve.

I can’t know and don’t really want to find out how accurate a depiction of Danish life this is for the disorganised criminal element or their parasites/hangers-on. There are drugs and criminals in every culture in the world; it’s a given, there’s too much money involved, and a lot of people can’t handle the idea of regular jobs and lives. But it feels real, which is the ultimate trick any film has to pull off.

If you wanted to get all moral about it, at least the director never makes the mistake of making this lifestyle or the fabulous prizes and delights on offer through the world of drug dealing, ever look appealing or easy. The week of Frank’s life that Pusher covers makes it look like such a tortuous existence that flipping burgers in the Danish equivalent of a McDonalds (which, I’m sure is McDonalds) seems preferable.

Any of the people Frankie could be close to, or seems to have any tenderness for, like a former working girl called Vic (Laura Draesbek), his retarded friend Tonny, or his mum, whom he briefly visits, he pushes away or abuses as he sees fit. This shouldn’t be mistaken for character complexity or as a character arc, because this story ain’t about redemption or about explaining how people end up where they are: Frankie is a bastard and probably gets whatever he deserves because of how he acts and who he is.

Only one character exhibits any discomfort with ‘the life’; a big, beefy henchman called Radovan (Slavko Labovic) who wishes he could do something different. But when he’s called upon to torture and maim he shows no reluctance. Almost everyone else seems content to keep meandering along in this hell of their own choosing, because they see no other life possible on the horizon.

This film and the ones that followed: Pusher II: Blood on My Hands and Pusher III, I’m the Angel of Death, have proved immensely successful in Denmark, and not really anywhere else except on the festival circuit. They certainly have merit, but it’s hard to recommend the films to anyone who doesn’t go out of their way to watch obscure, transgressive movies from wherever they can. Whilst the States and plenty of other places produces a multitude of movies each year on similar themes, rarely do they bother creating stories of such bleakness and ugliness.

This interesting flick could not be further from the likes of Scarface, Trainspotting or Lock, Stock and Two Smoking Barrels if it tried. Which is why it has some merit, in the end. It's still pretty depressing.

--
“You should have just said thank you” – Frank, Pusher.