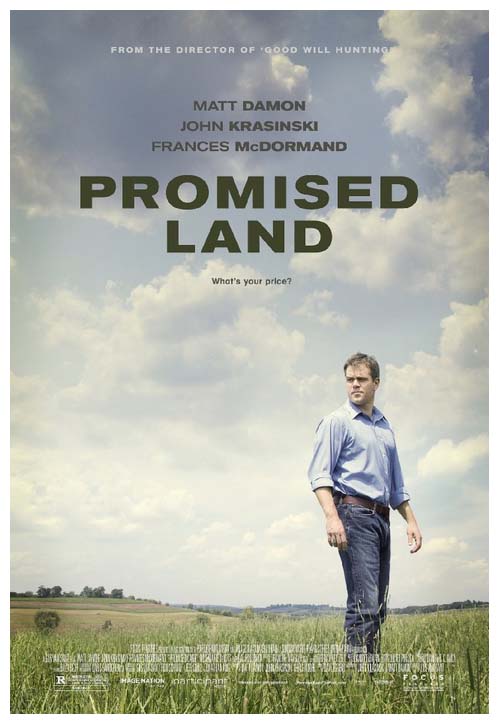 What's over there? Is it coming this way?

Humans are by their very natures perverse creatures. We want what we don't have and forget why we wanted it so desperately once we get it.

I could go on giving you examples of the strangeness that is our legacy, as if you weren't ever aware that people were like this, but the reason why I'm even bringing this up is because this flick had a strange effect on me.

There's barely anyone on the planet that would disagree that this flick is anti-fracking propaganda. I doubt the director Van Sant or Matt Damon or Frances McDormand would be surprised by any of this. It's a position, a stance, an opinion that I basically share. The people in this flick, patiently building their straw men for the purpose of knocking them down, are saying something that I, a person who doesn't trust corporations or governments to do what's right by the people until they're forced to, basically agree with.

I don't particularly love "the environment", but I know a few people that do, and since I consider 'the environment' to be that place where I live (ie. the Earth), I lean towards not completely wrecking the place, or using the way Nature was dressed as an excuse for despoiling it.

The net effect, however, of watching a flick like this is that it makes me think, "jeez, maybe fracking isn't that bad after all."

No-one likes being told things. We resist lectures, it offends our sense of self to be spoken to didactically. Even, in my case, being told something that I basically agreed with, it puts me off. Makes me feel like the film's producers think I'm an idiot that can't understand an argument unless you put a down home, salt of the earth, hillbilly human face to the story.

It's like showing me a picture of a pure white baby seal with a tear in its eye and a sealclubber's club poised just above its head, with the text beneath it saying: "donate to our cause or the seal gets it!"

This is more about my perversity in response to its message than the flick being inherently flawed. In almost every circumstance, I'd be against the clubbing of baby seals, but if you try to emotionally manipulate me into agreeing with you and sending you money, my grunted response would be "Swing Away, Merrill!"

It's probably a better flick than I'm giving it credit for. It wasn't an unpleasant way to spend a couple of hours. Still, I don't like having my intelligence insulted, even by people I agree with.

The main part of the story, in a time-honoured cinematic tradition, is about a main character who represents some evil organisation, who confronts some hicks in a rural setting, and eventually goes native. Whether it's the British Crown, a government, an oil company or the Aryan Nation, they start off citified, callous and cocky, and end up humbled, shacked up with some chick, and more appreciative of the simple things and simple people in life.

In this case, the evil organisation is an 'energy' company. That 'someone' who represents them, and everything that's wrong with greedy 'city' people, is Steve (Matt Damon) and his co-worker Sue (Frances McDormand), who work for Global Hyper Omni Tech or something very generically similar.

He is of humble country origins himself, having grown up on a farm. As everyone knows, all people who grew up on farms are inherently, undeniably, wonderfully good people. His skill with "these people" is convincing them that he's one of them, and that what he's offering them is the last chance these bumpkins have of making any money before they are swept away into the dustbin of history, or by the next financial crisis, or when Obama personally comes to take away their guns and moonshine.

Because the manufacturing jobs are gone. The high yield agricultural stuff is all run by a few companies, so the small farms can’t compete because of economies of scale, so they’re never going to see money again. He’s offering these people, dressed as he is in newly bought flannels and trucker hats, their last chance at the golden ring, at the golden ticket to Willy Wonka’s Chocolate Factory, their last chance at what they imagine is millions of dollars coming their way if only they sign over their mineral rights to the company.

No-one should be able to argue with that. Isn’t it a win-win for everyone? For the town, for the community, for America?

The townspeople mock him and his deceptive ways, but they’re all pretty much on board, since the prospect of free money appeals to everyone, apparently. The potential for the destruction of the land around and beneath their homes doesn't really see possible, and it's easy for them to put it out of their minds when dollar signs dance before their eyes.

When there's a bit of opposition, in the form of the local aged school teacher (the always awesome and crotchety Hal Holbrook) mentioning all the stuff that can go wrong because of this kind of drilling, this goddamn fracking stuff, Steve can glibly argue his way out of anything. Also, by the way he tries to ingratiate himself with the locals, by buying rounds at the local pub and romancing a local lady (Rosemarie Dewitt), we're meant to think he's winning the hearts, minds and vaginas of enough locals for it to be solely a formality. There's the threat of an upcoming town vote on whether they'll get on the gravy train, but we're meant to thing Steve's winning ways have got it in the bag.

Steve's opposite turns up, his antithesis, his Other, however, and somehow everything doesn't look as definite. A man with the unlikely name of Dustin Noble (John Krasinski) turns up, with a baseball cap and a smile, and a bunch of posters depicting the effects of fracking on other farmland. This guy is even better at ingratiating himself in the community, even better at sleeping with the locals and even better at singing karaoke than Sue is. Somehow it looks like the community might vote against Steve and Global Omni Hyper Tech, but not because they're convinced by empirical evidence or cogent argument, but because they like Dustin more.

Since this is a battle of personalities, and not what's right or safe for people, communities and little puppies, we're meant to see that, perversely, Dustin is the villain, and we somehow want Steve to outwit and outplay him. And we do, but I don't know if we should. Even when Steve tries to bribe Dustin, it's not enough to get us to either hate Steve or Dustin, since it doesn't lead to the outcome you'd expect.

Of course there are further revelations down the road, but none of them convince me that the case the film was making - that fracking is too dangerous and destructive to the environment compared to the profits it can generate - is a case that the film makes convincingly. The provenance of a certain photo becomes a big issue, and while I could understand that where it was taken might matter for someone's credibility, if the shot was actually of the horrible effects fracking could produce by killing a whole pasture full of cows, what difference would it make if the shot was taken near Lincoln, Nebraska, or Lafayette, Louisiana or Buttfuck, Texas? I never thought I was an expert on the issues before watching the flick, and I know even less now, which, for a thinly veiled piece of propaganda, means it didn't really achieve its aim with me.

I can understand the emotional aspects of an argument, but emotional entreaty without any reasonable backup or factual basis is just manipulation. I don't seek 'facts' in my fiction, but they can certainly help the medicine go down.

I still found the film reasonably enjoyable, since Damon is generally pretty good in most movies even when he's not killing other agents or assassins, and he's good enough here. McDormand is solid as well as an older, more cynical, more ruthless version of the company man Damon plays, and the rest are able, unremarkable support. I just didn't find it convincing. It also, despite having much of the Local Hero set up, didn't really convince me that the change of heart of the main character was a genuine, organic character arc, and that he could ever go native with these people. If anything, seeing him move along to the next town primed for destruction would have been more sobering, more of a wake-up call than this ends up being.

All I'm saying is: it's definitely not compulsory viewing, unless you really, really, really care about fracking. And who does, outside of the PR people who

6 times the film made me feel like putting a bullet between the eyes of every panda that wouldn't screw to save its species, and open the dump valves on oil tankers and smother all the French beaches I'd never see out of 10