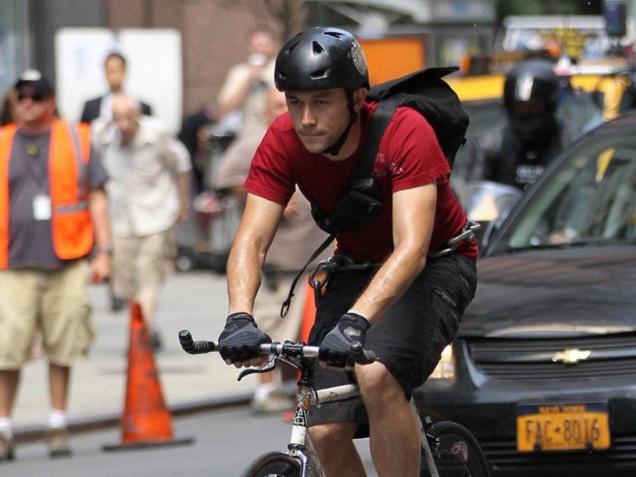 There's a point in this flick where a character, let's be honest, the baddie, yells at the main character, "New York hates you" with a great deal of venom and probably a touch of insanity, but some truth.

Why is he screaming this, and at whom? A terrorist? An Occupy Wall Street protester? A Wall Street banker? Obama? Someone who works at Planned Parenthood?

No, he's yelling this at someone who's a New York bike courier. New Yorkers - and by default, all drivers and pedestrians - hate cyclists, is the message.

Is it true? I mean, I guess that there has always been a tension between people on bikes and people in cars, mostly due to envy, I guess, but I didn't think it had reached the level of being a globalised rage against those who enjoy two good unmotorised wheels on a daily basis.

People on bikes hate people in cars because people in cars can and often do end the lives of people on bikes, and drive as if they're oblivious that this could be so. This happens, very obviously, because of basic physics. The formula for calculating Force, as far as I can remember from high school science classes, is Force = Mass times Acceleration. Cars have lots of mass, and go very fast, so they do a lot of damage to weedy types on deadly treadlies.

But why do car drivers hate cyclists, then? Is it guilt, is it resentment born of the relative freedom bikes enjoy in traffic jams, or is it because of a quality ascribed to those who eschew four wheels for two? It's not really that much of a choice for many of us living in the inner city, where a car is more trouble than its worth, and a bike is a relative and far more useful necessity in comparison, at least for those of us without that much money.

There's no guessing where the sympathies of the makers of Premium Rush side on. Totally on the side of the bikes, but then again, why not?

Don't start getting cocky, middle-aged men in lycra: It's not a celebration of people on the weekends who wear all that incredibly expensive skin tight stuff bulging over their many bulges so they can chug chug along to some place nearby in order to feel like they've achieved something meaningful and healthy. Instead, Premium Rush celebrates and lionises those brave and foolhardy men and women who cycle across the metropolis of New York as if the devil himself is on their tail.

The lead character is Wilee (Joseph Gordon-Levitt), presumably named after the coyote from the old Warner Brothers cartoons. He's tasked with delivering a seemingly harmless letter from one end of the city to the other. He has an hour and a half, and, as the flick is just over 80 minutes long, it's almost, we could assume, a exercise in real-time. That would be a mistake, though, because there are plenty of flashbacks and such dragging the story out. He rides with a passion and a fury, with seemingly no fear or favour or even brakes on his bike.

New York is obviously not a patch on Mumbai or Jakarta for messy crowdedness, but it's surely not a place possessing a reputation for ease of driving travel. Wiley speeds through intersections ignoring every road law applicable to anyone in the world, in the pursuit of delivering on time. Because of energy drinks, perhaps, or ritallin, or some neurological difference, with his senses and predictive abilities ramped up, Wilee can look at complex variables (a bunch of fast moving vehicles and people at a busy intersection) and plot out his course based on what's likely to happen.

For our benefit, his cognitive process is set out by alternatives, as he sees one possible path, ending in disaster for himself or for someone else, another path that's worse, and a third that looks bad initially, but could play out best. We get that this is all taking a second to occur before he does it. It's a neat effect, with none of the labouriousness, if it sounds similar to a similar technique used by Robert Downey Jnr in those "No Shit, Sherlock" movies.

We only see it a few times, but we're meant to assume it's something Wiley does constantly on a daily basis. He's very good at what he does, and possibly mad, but who cares.

His nemesis is a cop played utterly crazily by the new Christopher Walken known as Michael Shannon, who's every bit as strange and manic as he is in everything he does (with the exception of Take Shelter, where at least he wasn't manic). The cop wants the letter Wiley is couriering across the city for reasons that are not very nice at all. Everything starts happening to Wilee first, as a guy on a bike races a guy in a car, but they each have their strengths and weaknesses.

I have to say this is one of the best flicks of its type that I've ever seen. Then again, it's one of the only of its type that I can think of. It's like a car chase flick but with bikes instead, mostly. How lazy an analogy is that? I've seen a lot of flicks over the years, but I can't think of one very much like this. It's almost like 90 per cent 'thrilling' racing either away or towards something, with a bunch of other backstory filler and emotional treacle to humanise the story, which was necessary. I guess.

There's a human interest element to why Wiley ends up doing what he desperately has to do, which I guess gives his actions more of a point than just being faster than everyone else. He is ultimately trying to prove something, not to himself or to the cop, who's just horribly bad news and a nasty (but funny) person to boot, but to his girlfriend, who doesn't completely (yet) get where he's coming from. Brakes are death for him, and they would be boring for us, I guess.

This isn't a powerhouse acting role for Gordon-Levitt, who's great in everything he's in, yes we're all getting sick of how wonderful he is. It's an almost purely physical role, and I guess, in the parts that he's in, he looks very convincing, and we don't want to see him get hurt even as those around him or chasing him keep hurting themselves. I've no doubt stunt guys and expert riders did most of the cool looking stuff, especially in a very show-offy scene where Wiley needs to get out of a police impound lot using a mountain bike in exquisitely amazing ways, but it's convincingly done. There's also a lot of CGI, especially in the in-traffic scenes which are terrifying for the audience, but thankfully no Gordon-Levitts (like lesser cousins as stand-ins) were killed in the course of making the movie.

Though apparently he was badly hurt during filming, which is a small price to pay for being Joseph Gordon-Levitt (though 30 stitches is a lot). The energy of this flick is incredibly high throughout, which obviously helps, but it doesn't resort to what I feared would be the case, being herky-jerky camerawork or overediting. It's clean and smooth throughout, which works beautifully in terms of getting us in the audience to do that facial expression where you lean backwards and grin in terror at impeding momentary doom. Close shaves, split-second saves, momentary slivers of grace or utter crunching abound, and along with that is a healthy sense of humour about the whole thing keeping it buoyant.

It doesn't take itself too seriously, whatever the stakes may be, which keeps it all nice and light. Wiley not only has the nasty detective to deal with, but also a rival courier with designs upon his girlfriend / umfriend, and a bicycle cop whose path he crosses inadvertently.

Is it likely that any of this could happen in the stretch of the metropolis depicted in the space of time required? Absolutely not, but it hardly matters, because it keeps moving moving moving. The cop couldn't have gotten from one block to the next, let alone 20 blocks or so to multiple different destinations, nor could Wilee have traversed that same distance twice and had an impromptu race through Central Park as well, since things were getting too easy, but who cares when we want him to get away clean? Maybe calling him Roadrunner would have been too on-the-nose, which is why they called him Wilee instead, but that's who he really is in this, smarmy little bastard.

I had a ball watching this, and it makes a change for me. It's completely lacking in pathos, seriousness or pretentiousness, and is much the better for it. Consider it a palette-cleanser, helpful for resetting and recalibrating one's movie expectations in the face of the utter crap that's out there.

It's a joy, if a simple one, but a joy nonetheless.