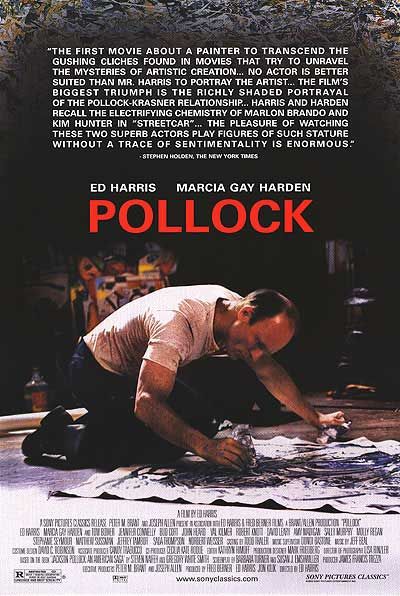 I know of at least one of his works first hand, having seen his so-called masterpiece Blue Poles just recently at the National Gallery of Victoria in my home town of Melbourne. When it was purchased in the seventies, there was a major kerfuffle as to both the perceived waste of money (it cost $1.35 million at the time), and its perceived lack of artistic merit. A less than supportive Opposition politician of the time, W.C.Wentworth IV, who seemed more disgusted with the lifestyle of the artist and the end result more so than the money spent on it, was heard to remark in Parliament:

“When the bargain-priced masterpiece Blue Poles reaches its fortunate purchasers in Australia, will you discuss with the President of the Senate the possibility of having the painting laid out on the floor of Kings Hall so that the honourable members and senators can view it from the viewpoint of its inspired creator? Will you further arrange for free drinks to be served in King's Hall so that honourable members and senators can share to the full in the inspiration of the artist or artists? If the painting is so exhibited, will you ensure that it is securely fenced off in order to shield us from the temptation to take off our shoes and affix addenda to it in the same manner in which the basic painting was allegedly done?”

To which he was allegedly told by the Senate Speaker to go sit on top of a big pole himself. The schoolyard has nothing on these guys.

The painting’s worth some obscene amount of money now (or at least more obscene), but us plebs are left none the wiser as to the merits of it all. Abstract expressionism is the hardest sell to the uninitiated, and I can’t pretend to be an expert on its worth overall. I can however appreciate a well-made film about one of the art world’s titans. After all the most important factor regarding abstract expressionism, at least from an American point of view is that it was considered the first true American art movement of worldwide importance. And as one of its greatest exponents, naturally a film about Pollock is of some interest.

Leaving the art aside for the moment, as represented in this biopic, Jackson Pollock was a complete and utter prick. Abusive, violent, alcoholic, adulterous, completely self-centred, he was nonetheless an artist with tremendous ability and vision. Completely committed to his art to the detriment of the people around him, he worked obsessively and single-mindedly. His long-suffering wife Lee Krasner (Marcia Gay Harden) puts up with his shit because she believes wholeheartedly in his genius. An artist herself, she puts her career seemingly on hold in order to babysit and mollycoddle this demented baby monster.

Are the performances great? Eh, kinda. Harris portrays Pollock with such a complete subsumption of himself into the character that for decades to come I’ll probably think of Ed Harris as Jackson Pollock, instead of as the guy that played him in a film. Marcia Gay Harden puts in good work as his martyred saintly wife, Lee, who whilst putting up with more than any mortal should ever be expected to, still has plenty of fire and backbone.

The film is well directed and mostly interesting throughout. The supporting characters put in good work, especially Jeffrey Tambor (who I always associate with his character Hank from The Larry Sanders Show) who plays influential art critic Clem Greenburg. There are a stack of other cameos, including Jennifer Connelly, who gets maybe a line of dialogue, Val Kilmer as Willem De Koonig, who ends up looking like a washed-up pornstar with too much tannage, and Amy Madigan (Harris’ wife) as Peggy Guggenheim. Funniest for me was seeing Bud Cort, who five people might remember from the classic Harold and Maude, playing an ancillary character. Jeez, age has not been kind to the guy, though I believe a car accident may have had something to do with it.

The problem with biopics is always that of pacing. Because you’re trying to represent a life in sequence, usually with some elliptical device to give the film some circular type of narrative, hastiness is not an option. The pacing in this film I would almost hesitate to label as ‘deathly’. It’s like a slow march to the grave, which is what ends up happening anyway. The scenes where he’s working, after (Harris) studying his technique for countless hours, work surprisingly well. Also parts where he’s being filmed begrudgingly work surprisingly well. However at about the three-quarter mark of the film I’d just had enough. I no longer wanted to be watching a film about Pollock. I’d learnt as much as I cared to about his life and his art, and just wanted the fucker to die already.

Apart from being a completely self-centred prick from beginning to end, away from his canvass Pollock is entertaining only as the worst, most buffoonish drunk. One sequence at the midway point has him breaking a period of abstinence from booze by going berserk, buying a case of longneck beer and trying to ride a bike home, keep drinking from a bottle and balance the case of beer on the handlebars. Naturally it ends in comical disaster, a disaster so complete that anyone who’s ever done something particularly stupid whilst smashed will feel sheepish and embarrassed from the recognition factor.

Other moments have him berating the people around him for not noticing the importance, the majesty, the sheer wonderfulness that is Pollock, which makes him even less sympathetic as the already unsympathetic protagonist of this cavalcade of fun. Towards the end he is hard to watch, deliberately. Harris fully intended to show how complete the artist’s decline was even prior to his death, and does so. Having failed to earn any sympathy for the guy or any deep appreciation of his art during the course of the film, with his boorish and stupid death we end up hating him.

What drove Pollock is still a question that goes unanswered. Also, why he was such an asshole isn’t evaluated or even hinted at. At the early stages of the film he is shown acting like a baby having a tantrum, smashing his fists on a kitchen table for no reason discernible by this reviewer. Later on his vicious hatred of his wife could be extrapolated to come from the unhappiness he felt due to her decision not to have children. She decides this because she knows that the full time care of an emotional infant like Pollock requires would make taking care of an actual baby impossible. Pollock’s hatred of his wife, as displayed by Harris is frighteningly palpable.

There are scenes where Harris tries to explain the reason for his art and the manner in which he created it, the purpose of abstract representation and what truth he attempted to elide from colour in his painting. It works without coming across as a dry lecture or as pretentious twaddle. It needed more however to convince people why his art mattered to him, to other people, to the world over.

All in all the film is fascinating but not entertaining at all. Watching it to see how else Pollock can fuck up isn’t the same as being drawn into the story of a great artist with personal shortcomings. Still Harris deserves to be commended for sticking clearly to his vision and for realising his story in such an uncompromising fashion.

I have of course heard people say Pollock was nowhere near as much of a prick as he’s portrayed here, and that Harris took the easy way out by deciding to resort to artist stereotypes and cliches about tortured geniuses. I can’t say how accurate the portrait of Pollock this is, all I can say is that making an interesting film out of a boring person’s life is no mean feat. Because let’s face it, if they want to make films about drunks who curse, fight and stagger all over the place all they have to do is come to my neighbourhood.

On its own it’s a somewhat interesting film. For my money Basquiat is still one of the best artist biopics that I’ve ever seen about a modern artist, which succeeded in meshing the need to explain where an artist was coming from as well as letting us trawl through the mess that was their life, something which Harris, for all his ambition, fails to achieve.

6 times Ed Harris needs to be punched in the ovaries every time he's tempted to overact, which is all the time, out of 10