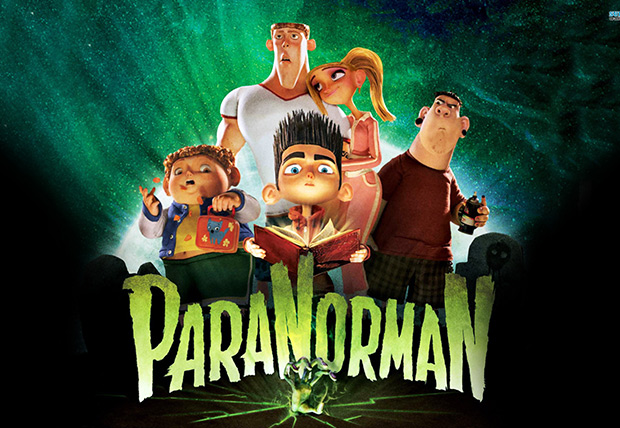 This is blatant false advertising - Norman never gets
para, not once

Mistakes, grand follies, profound errors of judgement… I’ve made a lot of mistakes in my life. That should be patently obvious to you by now. Most of them I deeply regret, some of them I don’t, but it’s safe to say that mistakes and bad decisions seem to define parts of my life far better than any decent choices I’ve ever made.

What am I nattering on about? Well, let’s just say that since I became a parent, all my bad decisions tend to revolve around parenting. The propensity for making mistakes, if you’re going to survive for any length of time in this life, has to be counterbalanced by having some capacity to learn from those mistakes, and to not repeat them throughout the generations.

That is one of my only virtues, in that hopefully I don’t make the same mistakes too often before learning “Fire? Hot!!!” after burning some fingers fourteen, fifteen times.

The mistake I made in relation to this movie is that when your five-year-old daughter says to you, after watching the trailer for ParaNorman in front of Rise of the Guardians, “Daddy, I really want to see ParaNorman!”, you exercise good judgement and say, “Darling-heart, apple of my eye, daughter and only heir, you’re too young for that movie, maybe when you’re a bit older.” You don’t think about it for a few seconds, belch out some popcorn, and then mutter “Sure.”

You also, a while later, don’t actually let her watch ParaNorman, because a rating of PG doesn’t always mean, “Don’t worry about it, the kids will be fine”; it can mean “This shit will give them nightmares. Nightmares!”

Look, I know I stuffed up. All the ponies in the world aren’t going to fix this one. Oh well, I guess I should start saving some money every week to afford the therapy she’ll doubtless need in time…

ParaNorman is made by the same awesome group of lovely creatives (calling themselves Laika) who brought the world the animated goodness that was Coraline. It uses plenty of CGI animation, but it beautifully and expressively uses a lot of stop-motion (as in physical, solid) 3D animation in a very enjoyable fashion.

The story is a tad macabre for the littlies, seeing as it all hinges on the MURDER OF A CHILD BY A BUNCH OF PURITAN FANATICS! Honestly, if I’d known… well I probably would have let her watch it anyway. The Norman of the title (voiced by Australia’s Own Kodi Smitt-McPhee) is a glum little chap with straight-up pointing hair and large swath eyebrows that perpetually signpost his disgruntlement with this unfair world. He has a gift, but the world around him punishes him for it, and rightly so. If someone tells you they speak to dead people, and the dead speak back to them, shouldn’t we all just say “Ooooooh-kay? and back away politely?

Unless it’s the kid from The Sixth Sense, and then you’d wonder what he’d done to stop himself from aging for the last fourteen years. Creepy Lance Armstrong-produced superhero-anti-aging drugs, I’m sure.

Norman sees the ghosts of the dead, and can chat to them, and his insistence that he can do so makes him quite unpopular, even within his own family. The father tries to be understanding, but he’s exasperated the way all movie fathers have to be until they wise up and change their minds (lessons we can all take away from the experience, like leaving Thailand with an STD).

If this were the average town, it wouldn’t matter. But Blithe Hollow, a New England town probably just down the road from Sleepy Hollow and Salem, has a long history of hysteria and persecution. Images of witches festoon every surface, and the killing of a particular witch seems to have been woven into the fabric of the town’s sense of self. The execution of an evil, hook-nosed witch is re-enacted each year by the town’s children, in a pointless and insulting pageant, which belies the truth of what actually happened in this town.

Someone, though, can read the signs. Something bad is about to happen to the town, because of something the townsfolk did hundreds of years ago, and the ugliness of their ignorant crime threatens the lives of everyone everywhere, presumably.

This doesn’t sound like standard children’s fare, and it probably skirts the edges of appropriateness dozens of times. It’s definitely not cool for five-year-olds, something which everyone else in the world realised quite early on, which took me a stack of time longer to grasp.

The witch’s curse causes a group of zombies to rise from their graves to terrorise the town, and even that is subverted in this somewhat subversive fantasy story. Of course, the film delights in the chance to generate a bunch of PG-rated scares and thrills related to the kind of zombie action the rest of us grown-ups take for granted, what with all our other adult zombie-related media in the game, tv and movie realms.

Sure, this flick doesn’t offer the gut-wrenching gore and horrible decisions and their consequences of shows like The Walking Dead or the bleakness of 28 Days Later, but it’s plenty dark. Too dark? How the heck would I know?

How dark? All of these shenanigans, all of the suffering that looks like it’s about to be visited on the denizens of Blithe Hollow, is because the people involved executed a child who they feared and whose abilities they didn’t understand. That’s plenty dark for a film that’s meant to be aimed at kiddies. And when everything seems like it’s going to end up horrible, it’s the current, living townspeople who end up acting like lunatics on a rampage.

Ah, American movies: they’re always illuminating the ‘fact’ to the rest of us that Americans en masse are permanently one hockey game, one case of mistaken identity or one Twinkie shortage away from turning into a murderous gun-totting mob bent on destruction once the thin veneer of the social fabric is slightly stained, let alone torn asunder by catastrophic events.

Our hero is offered the chance to put off the ‘witch’ for another year, as apparently has been the case for the last three hundred years, by reading a book to her. He prefers, against the advice of people both clued-in and clueless, to go his own way, to find a way to solve the problem once and for all. It’s to his credit as a character that he does so, because that witch has a lot of rage to spare.

The film does have a lot of humour in it, much of it of a mordant and tongue-in-cheek variety, but this isn’t an over-the-top overwhelming experience. It’s a somewhat sedate and relatively calmer ride than the ones we’re becoming accustomed to. Using the 3D models gives the characters a solidity usually lacking from animation, but it also makes it feel like their range of actions are somewhat constrained or restricted. That doesn’t mean there’s a lack of action, but it isn’t excessive by any means.

It makes for something of a more reflective framework. Norman is a pretty uninspiring protagonist, but he’s ideal in the role as a glum outcast who understands that the hurts and slights he’s suffered don’t entitle him to take out his revenge on those around him as others might. He has a conversation with another put-upon boy who tells him that if he were taller and stronger, he’d probably be a bully too.

This meshes thematically with the Big Bad who threatens the town, who is asked, in the end, if she can put aside the horror of the past in order to be better than her murderers, to find peace. In life some of us become the oppressor or the oppressed, sometimes at the same time, sometimes one after the other, but hard it must be to forgive something so awful and show mercy to one’s tormentors, especially once someone finds the means to exact revenge.

Forget that, Norman. I say she’s justified in burning the whole crummy town down to the ground, and she should salt the earth afterwards so nothing ever grows again.

The supporting cast of characters is similarly an uninspiring bunch of people, many of whom are heroically ugly, but they have their moments to shine. They’re mostly there to provide a punch-line rather than be characters in their own right, but it’s not like I was hungering for backstory or development. They’re there for a single gag in some cases, and to show that Norman is, on the most part, the only decent person in Blithe Hollow’s entire despicable history.

The story is an interesting albeit familiar one, and it’s delivered in an entertaining enough package. It’s not a brilliant film by any stretch, but it’s an enjoyable one, with some amusing references to old horror flicks that kids couldn’t possibly get or care about unless they have a horribly negligent parent in charge, like mine apparently does. It’s not really any stronger than most of the other animated movies I saw in or from 2012, but I definitely enjoyed it more than Brave, which isn’t saying much.

On a curious note, the “but I’m gay” joke right at the end is cowardly in the extreme, but is being used as an example of how daring and bold the makers were, for a two-second line that changes nothing in the world or in the film.

Yeah, you guys are really dangerous and way out there on the cutting edge.

Maybe I’m wrong about whether this flick is that scary, after all, my daughter was more afraid of the homeless guy (voiced by John Goodman) than she was of any of the witches or zombies. Still, it’s not recommended for the littlies.

--
“It would've been a quiet night too, if it hadn't been for those meddling kids!” – time for some Scooby snacks - ParaNorman