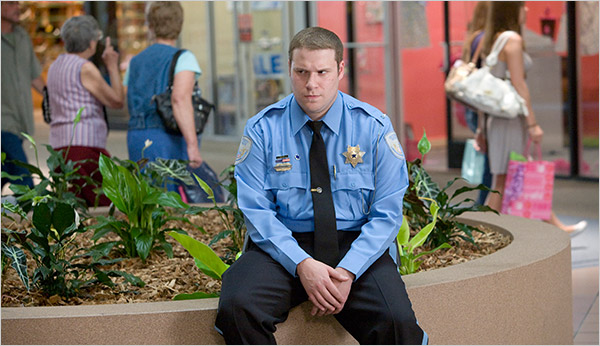 Ignore and Avoid, at absolutely all costs, have no doubts

Damn, this is one ugly movie. I’m usually comfortable with the kinds of flicks about which people say “I felt like taking a shower after watching it”, but in this case, I want to lift my brain and eyes out of my skull, and scrub them clean with something caustic and abrasive.

As if I didn’t currently already dislike Seth Rogen enough, here he is in a ‘starring’ role as a mentally ill, possibly retarded security guard who holds onto his job for no reason I can glean. He is a stupid and violent prick, and yet he is the hero of this incomprehensibly bad film. At first I thought it was a drama. Then, a comedy. Then, a black comedy. Then a drama again. Then maybe a horror flick, then maybe a romance. A character study? Slice of life? Social satire? By the end I’d given up trying to figure out what genre the flick resides in, because I figured the people making it couldn’t figure it out either. I haven’t seen such an ending with so little credible believability in a long fucking time. That this character gets the ending this flick doles out is a travesty of injustice alongside the fact that it’s taken over thirty years to bring that scumbag Roman Polanski to justice.

Ronnie Barnhardt (Rogen) is the head of security at a suburban mall. Very quickly, our first question becomes: how can such a clearly stupid, deranged and violent lunatic continue to be employed? How is it that they are completely oblivious to the range and vitality of the abundant lawsuits his daily actions would result in?

It’s never explained, not to my satisfaction. For the longest time, no-one else points out this obvious fact either, until his frustrated employer bellows at him, “Ronnie, are you fucking retarded?”

It’s an interesting question. Though clearly Ronnie takes medication every four to six hours for his bipolar disorder, he seems to be, as well, just very stupid, as opposed to intellectually handicapped. His every interaction with every person who crosses his path drips such incredible moments of idiocy that you wonder how it is that he exists in this universe other than having been deposited here by alien intellects, vast and cold, who’ve brought him here from an alternate dimension as an experiment to test out our species’ tolerance for putting up with excruciating bullshit.

Ronnie’s nemesis isn’t the sexual pervert / flasher who’s assaulting women in the carpark, who Ronnie vows to kill on the local news; the police detective who loathes him (Liotta) or the vendor with the restraining order on him; all of his co-workers, or in fact everyone who crosses his path. It’s his complete incompetence and his dangerously delusional belief in his own awesomeness. In effect, he’s too stupid to know how stupid he is.

I find it hard to enjoy these kinds of flicks where the main character is so repugnant. I appreciate that there are flicks where the characters aren’t necessarily likable, or that worthwhile stories can still be transgressive and vile. Many of my favourite films involve just those elements, sometimes they're some of my favourite movies because they have those elements (Bad Lieutenant, as an example). The thing is, though, what I’m looking for is not a way for the repugnant character to be redeemed in some way. What I need is a reason to give a fucking damn about the story I’m watching. If the vile and dull fucker I’m watching onscreen provides me with nothing to justify my time, as in, something of interest or wonder, then why would I care what happens to him or her, or why would I care if they live, die or are redeemed at the end of the flick?

In fact, I’m not going to care, and I’m only ever going to be sporadically entertained by other random shit that happens. I not only didn’t like this character, I downright hated him, and wished him great harm. I wished him harm to the extent that, when the level or extremity of harm that his actions deserved never eventuated, it actively made me angry.

There are bits of the flick I found amusing, such as a drug-fuelled security guard rampage which involves hardcore drugs and the complete disregarding of potential lawsuits that would ensue after the assault of a bunch of kid skateboarders. But there are plenty more sections that not only fail to impress, they prompt full-on loathing, either for the main character, or for the people who put this shit together.

There is a sequence, which is meant to be ‘controversial’, in that it involves the main character pretty much raping one of the other characters. Now, I don’t want to get bogged down in the infinite permutations of whether it’s rape, date rape, or just very bad behaviour. The thing is, it’s just one of many of the awful things this lead idiot does, and, as if this matters, it’s in line with what you’d expect from this character. It's in character.

Seriously. It’s a loathsome part of a loathsome story, but is it really any worse than any of the other loathsome things he does? Is being a delusional date rapist worse than a violent bully who routinely brutalises the people around him for no good reason?

Actually, it is pretty fucking bad. The makers knew it would look bad, so they go out of their way to make the "victim" loathsome, so as to make the lead character's behaviour less awful, somehow. It's downright repugnant, and shows not a willingness to create dark material, but a mealy mouthed, palsied cowardice as a poor substitution.

If he was an even vaguely interesting character, maybe any of this would make a difference, but Hannibal Lecter or Billy Bob Thornton in Bad Santa he is not. Maybe, just maybe that unearned kind of heroic ending for someone who is decidedly not a hero harkens back to Taxi Driver, but geez Louise, the juxtaposition of such a good flick with such a bad one makes my heart hurt. In that I’m-tasting-copper-and-my-arm-is-tingling kind of way, not in an I-think-I’ll-go-listen-to-The-Smiths-and-cry kind of way.

It makes me wonder what exactly they were trying to achieve with this flick, which is why the ending, which seems like it was test-screened to within an inch of its life, is even more inexplicable. If it was trying to be genuinely transgressive, as in, if they were deliberately exposing us to a deeply vile character and world as some kind of philosophical / artistic comment or subtext, then why does the person least worthy of a ‘happy’ ending get one that makes no sense as anything apart from the final delusions of a dying moron.

In this or any other world, hitting twenty or more cops in the face and head with a heavy flashlight would a) get you killed, b) result in your being permanently crippled or c) more jail time than if you’d burnt down a black, gay friendly synagogue. In this flick, it results in Ronnie sitting in his room looking a bit miffed.

In some ways, all bad ways, I suspect this flick was written as a vehicle with Adam Sandler in mind. There’s a Sandler-esque quality to the film, even though I suspect when Sandler demurred, they thought maybe, with rewrite containing slightly uglier content and date rapes, they’d be able to make up for his absence.

It’s entirely possible, though unlikely, and the one thing I could have used as evidence that Sandler could have been in it but chose not to because of work commitments is that around the same time this shit was being made, he was starring in the Judd Apatow flick Funny People. And thus they had to go with their second, third or fifteenth choice Seth Rogen. Problem with my theory, mainly, is that Rogen is in Funny People as well.

So there goes that theory. I didn’t really find the flick funny, which could have made up for the painfulness of the experience, but, really, I suspect that even a few more laughs couldn’t have made up for the half of a half baked story filled to the brim with ugly characters none of whom I cared as to whether they lived, died or were horribly crippled. That the flick also wastes the talents of awesome stand-up comedian Patton Oswalt offends me even more.

Anna Faris I seem to remember as this funny actress who could occasionally be better or funnier than the material she was given. Here, she looks like she’s been taking cosmetic surgery tips from Donatella Versace, and is even less entertaining that Rogen. How is that possible?

It’s rare that I acknowledge that the watching of a flick has pretty much been a waste of time, but this is one of those times. Almost none of the experience of watching this dull, painfully stupid pseudo satire was made worthwhile by anything that happened in the story. Most of the quality players, like reliable overactor Ray Liotta, just don’t have enough to do.

And Seth Rogen, wow. I thought you were irritating because you were ubiquitous, but now…

Please, gentle reader, don’t make the mistake I did. I don’t deserve any better, for my many sins, but you? You deserve better.

--
"I ain't going to lie to you Ronnie, there is nothing good about this at all. " - truer words etc, Observe and Report