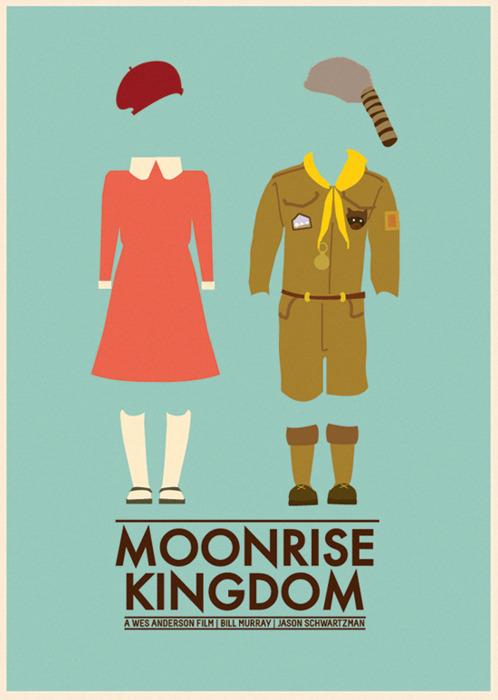 Enter the fussy world of Wes Anderson, again and again
and again

Every couple of years we are graced with another Wes Anderson film, and those that hate him and all his works are gifted with the opportunity to rant again as to why they loathe him, and those who rave for him do the opposite. My relationship is somewhat more complex, in that I find myself liking some of his flicks and not others, but it never sits as simply as “I like your old stuff better than your new stuff.”

Moonrise Kingdom is his latest (well, duh), and I enjoyed it well enough. It’s of a piece. You know what to expect in every present and future Wes Anderson film if you’ve seen at least two of them, because they never vary in their meticulous look, in their affected acting and in their quirky awkwardness that we’re meant to find endearing.

That doesn’t mean they’re all equally good or equally bad. I guess if you like the underlying story and fussy aesthetics, it makes up for all the Andersonian fetish work you have to sit through in order to get to that ‘happy’ place.

This latest one is set in the mid 1960s, and is focussed on a love story between two twelve-year-olds who are often referred to by their peers, families and authority figures as ‘disturbed’. Sam (Jared Gilman) is a specky orphan who no-one can stand. He might be somewhere on the Asperger’s / autism spectrum, or he could just be an actor in a Wes Anderson film. It’s hard to tell the difference sometimes. He has met and fallen in love with Suzy (Kara Hayward), who hates her family and the label of being a difficult or problem child subject to rages. She might be somewhere on the psychotic spectrum or she might just be etc etc.

Sam is in the Khaki Scouts, where they have a camp that’s run like a fort, and where he is loathed by the rest of the troupe prior to and after his escape. Their fearless leader is a particularly feckless and ineffectual chap (Ed Norton), who seems to be quite depressed with his general incompetence in the face of life’s challenges, and in losing one of his charges.

There are a lot of depressed people in this flick, but that shouldn’t be surprising to anyone, because it’s a Wes Anderson flick. Suzy’s lawyer parents (Frances McDormand and Bill Murray) are depressed too, mostly because they can’t stand each other any more, but also because Suzy’s their daughter, and they feel trapped by their family. A police captain (Bruce Willis) also gets in on the act, searching for the two lovebirds once they run off to be together, who’s depressed because he can’t be with the one he loves to smoke cigarettes with.

Sam and Suzy are not precocious children wise beyond their years or Romeos and Juliets capable of shaming the world with the white, hot glow of their star-crossed love. They’re two goofy, awkward, mentally ill kids with nothing to go back to and nothing really to lose, though the forces that be, bizarre ones at that, conspire to try to keep them apart.

All of this is meant to be happening on a fairly small island called New Penzance, that doesn’t exist anywhere except in the fussy, ascot-wearing mind of Wes Anderson. The two lovebirds essentially have run away in order to be together in nature, but their plan doesn’t really contain much else beyond that. So they go about living off the land, Sam using his wilderness skills / scout training to shepherd them towards… something, and Suzy using her portable record player and collection of stolen library books to keep them entertained. They, especially Suzy, speak in affectless monotones to each other, seeming as uncomfortable with being onscreen as the audience could be watching them.

It’s strange that we can find humour in this, or sweetness, but it’s there, somewhere there beneath the muted emotional palate and odd dialogue. Anderson is a craftsman, an artisan, but that doesn’t always equate to an enjoyable cinematic experience. He genuinely crafts these things exquisitely, but sometimes that can distance you from what you’re watching.

In almost every scene that deliberately looks staged and constructed with craft paper as if they’re images from a diorama or a high school play, the artifice takes me out of what I’m watching, because it doubles back upon itself in such a self-conscious way. I’m watching people in a flat scene that looks like humans in a dollhouse; the camera shifts only either left to right or up and down, as if the world these characters inhabit only works in two dimensions. It’s a strange world he conjures up for us all the time, one with an X axis and a Y axis, but nothing else.

Characters as well seem to only have one defining characteristic or quirk, and one outfit, costume or uniform. Little can they vary from that for the entire flick’s duration, because unless they’re the main characters they have nary a chance to do anything more than say or do one quirky thing before the scene moves on.

Tilda Swinton is in this as possibly the strangest character, as some malevolent character called Social Services, who threatens to take the orphan away and institutionalise him and worse. She, with her upbraiding manner and blue nurse/stewardess/Mary Poppins ensemble and odd name, represents less of a character and more of an affectation made flesh. The world really seems to have it in for Sam and Suzy, putting obstacle after obstacle in front of this perfect couple, and we are meant to be barracking for them as they avoid the slings and arrows, sometimes literally, aimed at them.

It’s impossible, even for a cynical grump like me to not want the kids to get their wish and be happy together. As uneasy as aspects of the story made me, and as uncomfortable as one or two scenes of “young love” made me, invariably I come out of it on their side by film’s end. I can also appreciate the array of elements that Anderson includes which always seem to be more important than the story itself, which can, if we’re lucky, add thematic elements to the story, such as it is. There’s also, amidst all this awkwardness and artifice, the opportunity for a bit of meaning and a bit of humour. Many scenes made me think “well, that’s pretty funny” without actually laughing out loud, but I still appreciated some of the choicer lines which are delivered in a very understated, amateurish manner.

As an example, Suzy asks Sam about a dog that’s just gone to meet its maker, wanting to know if he was a good dog. Sam answers, “Who’s to say?” as if it hardly matters now, which is true, but not something you expect a kid to say in a movie.

Of the performances, I think it’s the kid, Sam, who really made the flick work. I’ve no doubt he’s probably been acting since he was an embryo, but the quality he brings to this is determination and a complete inability to care what other people think of him. This approach, or lack of polish makes some of his wordier, more unlikely dialogue much funnier than it would otherwise be with some precocious shit quoting Hamlet like he’s been doing it since crèche.

Suzy’s flat, affectless delivery and dead eyes works because this is a Wes Anderson flick and that’s how, I guess, he pictures his female muses. Most actors must be told to deliver in such a manner it seems, so I didn’t really relate to her as much or see why it was that Sam decided to pin the hopes of the rest of his life upon her. She works well enough in what she’s doing. I also think the flick kind of makes light of the potentially serious nature of her mental health issues, which seem to be more than just childish tantrums, since they involve self-harm and violent harm to other kids as well. But she is who she is, and if Sam accepts her thusly, so must we.

Everyone else brings what they want to bring despite what Anderson possibly wants, which is why they breath life into some otherwise airless, stultifying scenes. I really liked Ed Norton in this for some strange reason. The way he records daily captain’s logs into an antiquated tape recorder, well, antiquated now, reporting his failures seemed oddly sweet, of a kind I can relate to and appreciate. I saw him interviewed regarding his role here, and he said he basically played the character the way he thought Wes Anderson would play it, which confirmed everything I ever thought about both Wes Anderson and Ed Norton.

These are curious constructions, these films of his. They’re obsessive collections, reliquaries, jewellery / music boxes of elements, childhood memories and obscure references that mean stuff mostly to Wes Anderson and little to us beyond how ‘cute’ or quirky we find them. Expecting something more from this chap at this late stage would be too much. We have to appreciate what people are capable of, what they bring, rather than what we wished they would bring. As such I have to applaud him for his fastidious filmmaking, but allow me a bit of indulgence by expressing some frustration with the art he ultimately delivers. When the form is more important than the story, it kind of takes me out of it and reminds me what I’m doing, rather than making me think or feel about what I’m seeing.

In the end, I guess I choose to believe that it’s really a story about two lonely, love-starved, damaged kids in love trying to find that one place in the whole world where they can be together. What kind of stone-hearted monster picks apart and doesn’t enjoy a film like that?

--
“It's been proven by history: all mankind makes mistakes.” – I guess that’s why they say that history is written by the mistaken – Moonrise Kingdom