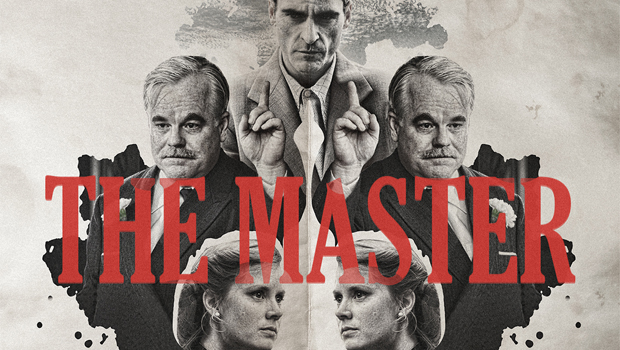 Strange people doing strange stuff to and for each other

I think Paul Thomas Anderson makes the weirdest Oscarbait films in the whole world. Even more so than obscure Mongolian yak herders turned filmmakers and all of France. The Master is another strange film, with a goofy ending, to add to the pile of strange films this man puts out there into the world, for our adulation and confusion.

For years leading up to its release, I kept hearing that The Master was going to be an expose on the creator of Scientology and the whole stinking cult itself. Then publicists and such backtracked those comments, fearful of incurring the wrath of the Church and its powerful devotees, you know, people like John Travolta, Tom Cruise and Will Smith. Who wants those angry, frightening people pissed off with you?

Having watched the film now, I mean, obviously, since I’m reviewing it, I am none the wiser. I mean the so-called Master of the title is played by Philip Seymour Hoffman, that great pink honey glazed ham of an actor, and he’s called Lancaster Dodd. Lancaster Dodd isn’t the same as L. Ron Hubbard, is it, but there are enough consonants in common to give it some kind of commonality.

And the cult here isn’t called Scientology, it’s called The Cause. Totally different. And the chap at the centre of things is accused, at certain points, of making the shit up as he goes along, and gets very shirty with people when they question the length and breadth of his genius.

Obviously, that makes The Cause the complete polar opposite of a genuine and true religion like Scientology. And instead of urging devotees of the faith to strive to get to Clear, here, they’re striving to get to Perfect instead.

What does any of this matter? Not a hill of beans, not a cracker. Knowing anything about Hubbard and his highly profitable charade is not necessary for enjoying this film, if ‘enjoyment’ is the actual objective, which, I would argue, is far from what a person can reasonably expect. In fact, enjoying a film like this is almost an impossibility unless you’re the kind of film wanker who can easily disregard all the elements that usually make a flick something you can enjoy. Thankfully, I’ve got it in spades.

You might think an Oscar-winning ham like Hoffman being in the flick playing such a ‘big’ character would make him the main character, but the real main character is Freddie Quell (Joaquin Phoenix), a returned serviceman who clearly had psych issues before the war whose problems have only magnified with the end of WWII. He is a very strange man. At some points, stoop shouldered and inhuman, he looked like a troll who had escaped from beneath the bridge of some child’s story. He is powerfully alcoholic, concocting concoctions out of industrial chemicals that would probably make you very drunk if they didn’t kill you. Before the war is even ended we see him extracting some hideous fluid from within the casing of a torpedo or missile, like any sane person would consider drinking such a thing.

That’s the thing, probably. Freddie Quell isn’t particularly sane. Neither, I’m starting to gather, is Joaquin Phoenix, anymore. Taking this into consideration with his increasingly bizarre behaviour over the last couple of years, which has been spun as some of kind live-action performance art piece (culminating in that terrible pseudo-documentary I’m Still Here), I think the guy really is nuts. Get the help that you need, Mr Phoenix.

That being said, if we excluded the mentally unstable from the film industry, 90% of the movies made over the last hundred years or so would never have been made, and I’d be sitting here reviewing the latest flipbook animation instead. Whatever he’s going through, it enhances the surreal characterisation he brings to the screen here.

Freddie meanders around fucking up at various jobs, invariably alienating the people around him by getting fucked up on his industrial-strength hooch and fighting with people. He stows away on a boat that just happens to have a whole boatload of party people there to celebrate some nuptials, 1950s style.

The man, the Man with the Plan is on board, it is his daughter being wed in the bounds of unholy and unsanctified marriage (Lancaster officiates, apparently self-granting himself the power to marry people), and instead of having Freddie thrown off the ship, he takes him under his wing.

It seems like he really likes the booze Freddie can create. It really helps The Master compose his holy words of wisdom at the typewriter, and it’s got a kick like a mule. But we are meant to believe that Dodd sees something more in Freddie, something very much more.

Other reviews, by reviewers admittedly better at their craft than I, and at the very least better recompensed, depict the formation of their relationship as being one of opportunity: that Lancaster Dodd sees in Freddie an opportunity to ‘prove’ The Cause’s efficacy and therefore he wants to use Freddie to validate his claims to the world about past lives and the benefits of ‘processing’ (which presumably stands in for Scientology’s ‘auditing’). He sees a troubled soul before him, one he can help and heal, and Freddie sees someone he can devote himself to. Like the culmination of a successful 69er, everybody’s happy.

The reason that premise doesn’t ring true to me is that, well, it doesn’t ring true. If that’s what Paul Thomas Anderson and co. say the premise is, well then, that’s what it is, and who the fuck am I to disagree? But I can’t help but be confronted with too much cognitive dissonance to be able to accept it.

I can buy that Lancaster Dodd finds something real about Freddie, and that he’s entranced by Freddie’s wild free spirit and destructive hedonism at any cost lifestyle, but I can’t buy that he thinks Freddie should be the poster child for The Cause. At best Freddie is a performing monkey, but at worst, and we’re meant to accept that Dodd is an intelligent man, whatever the rest of his faults might be, he can clearly see that Freddie is deeply fucked up. Plus, as the man who created this pseudo-religion, who knows better than anyone that it’s all bullshit, is he capable of being self-deluded enough to believe he can cure a dangerous, virtually illiterate headcase like Freddie? Or that this guy should succeed him in The Cause as its leader?

It doesn’t seem likely to me. The various other dynamics at play, even a strangely homoerotic one, sit ill at ease with the parent / child, mentor / protégé levels potentially at play, especially since Freddie and Lancaster seem like peers, agewise. I’m not sure how old Lancaster is meant to be, but the age difference between Hoffman and Phoenix is only about 5 or 6 years, not a generation. If anything, the way Freddie is played, he almost looks older than Lancaster, not least of which because of all the hard living.

No-one else around The Master really accepts Freddie, and Freddie virtually does nothing to endear himself to them either. Considering what must be the unquestioning, almost retarded nature of many of these devotees and hangers-on, it seems odd that they defy The Master in his relations with Freddie, especially The Master’s wife (Amy Adams), who hates Freddie from the second her eye rests upon his tortured form.

She’s an odd character too. She completely supports her husband, but seems disproportionately enraged by his relationship with Freddie, which she undermines at every turn. She also gives deft, angry handjobs when the situation requires it.

It’s an actor’s showcase, to be sure, and it’s filmed, staged and composed to within an inch of its cinematic life. Yes, yes, pretty film you have there. Scenes go on for whatever length the filmmaker deems necessary, completely being uninterested in how it hangs together timewise or structurally, how or whether it flows or not. That’s not necessarily a good thing.

I’m just not sure what it adds up to in the wash up. I felt like a dupe by the end of it, like I’d been sucked in by something promising enlightenment which only delivered irritation and a sore arse by the end. As with There Will Be Blood, Paul Thomas Anderson elects to completely undercut the entire film with a ludicrous ending that I found baffling. It’s not that I didn’t understand the ending, I was just baffled as to why Lancaster L. Ron Hubbard Dodd would be singing “Slow Boat to China” in that specific scene and moment unless a) it was another hallucination or b) everyone in the entire film was even madder than Freddie.

See it for Phoenix’s incredible performance, if nothing else. Let’s just say it’s even freakier and odder than Christopher Walken’s face and entire history of cinematic performances. The highlight is probably the freak-out in the jail cell, where he destroys himself and the whole cell, making Hoffman in the adjacent cell look genuinely frightened for a few moments. There’s a lot of stuff he does here that couldn’t have been directed or scripted, and it’s a frightening portrait of a man on the edge of sanity. I’m not talking about the character.

Still, for what quaint elements of interest that there may be contained therein, it’s nearly three-hours of pants-numbing tedium, with no worthwhile payoff that I could discern. Maybe I need to get my eyesight checked, after all. There it is, one good thing might have come out of the experience! Cheers, The Master!

--
“This is something you do for a billion years or not at all. This isn't fashion.” – ah, good to see those Sea Org contracts made it into the flick too - The Master