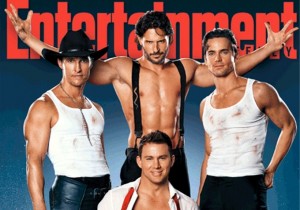 If you'd told me I was destined to watch and enjoy a film about male strippers in this here year of our Lord 2012, I would have scoffed and called you a liar to your face, despite your obvious track record as a fortune-teller and clairvoyant. If it was some other year, maybe 1997, maybe it might have been possible. But not now. Not in this bright, shining time of technological pinnacles and economic doom.

And yet stranger things have happened. It helps that it's directed by Soderbergh, who's been a consistently interesting director for decades (except when making those Ocean's 11-13 movies). And it also helps that they have a real life Chippendale in the lead role. Well, maybe not a Chippendale, but research shows that Channing Tatum was apparently the actual thing he portrays in this flick before he became an actor: a male stripper, stripping not to get through college but to get by until one of his actual dreams for financial security come true. He is surprisingly good in the role, and I say 'surprisingly' not because he's not a good match for the role but in spite of it.

Prior to this flick, I think, he's been regarded as a bit of a himbo, bit of a burly meathead with a still boyish face despite the abundance of steroids he's taken over the years. He also has a soft voice, incongruous compared with his appearance, that adds another layer to what he brings. The thing is, though, he's got a certain charisma to him. I've enjoyed his performances in films that I didn't enjoy, like A Guide to Recognising Your Saints, the Iraq War don't-send-me-back-again drama Stop-Loss and the Prohibition gangster era flick Public Enemies. All weak films in which he didn't exactly shine, but in which he did good work. And then of course in competent flicks, like the Jump Street remake, he showed that he's got more going on in his head and potentially in his future than just becoming another action lunkhead on the growing pile.

I don't know if Tatum being a former stripper adds a layer of verisimilitude to the proceedings, but it certainly doesn't hurt his chances. This flick tries to treat what the chaps do here seriously, though no-one sane involved in the production would pretend this is a cinema verite - documentary approach to the life. All I know is this makes male stripping look like the incongruous, awkward, hyper-masculine grind it probably is.

I can't say I really understand it (the job, as opposed to the film, which is really simple), but at least I can appreciate that the people making the flick respect it enough to treat it seriously. After all, I can't imagine there are enough women of the appropriate inclination in Tampa, Florida or anywhere else for that matter eager enough to make this industry viable, but it must exist. I can imagine packs of drunken retarded men keeping the organised crime run strip joints on King Street near where I work in the luxury they are accustomed to by 'making it rain' on a regular basis, but that's because they're seeing women strip. Calling these guys drunken retards is insulting, I guess, but the point is, and the way these places survive is because these guys aren't always or even mostly drunk. There are chaps going there for lunch during the week. They'll go there through the week, all with the certainty that they'll see waitresses in lingerie and girls up on stage doing everything they can to extract tips out of these guys.

And thus their world keeps turning. Women wanting to see male flesh on display on tap? I can't see a business model in it. I can see the small scale stuff (of individual entrepreneurial strippers for 'special' occasions), or a Saturday night or two per month at a place where 90% of the stripping during the week is women. Other than that its potential success is a mystery to me. Maybe women in Tampa are a breed apart. Or maybe I've underestimated the men and overestimated the women. Maybe there are a plethora of women out there willing to throw money at a guy just for being naked, and I'm missing this tremendous business opportunity by not investing now.

Dallas (Matthew McConaughey) seems to have it all worked out. He seems to have a firm idea of what the ladies of Tampa, Florida like. In him is the certainty that, through stripping, or at least by having a stable of studs strip for him, riches will flow. His problem is, or at least the opportunity he sees before him, is that why should they be stripping for $15 on the door, and for one dollar bills in Tampa, when they could be stripping for $20 on the door, and for fives in Miami?

Mike (Channing Tatum) is his star performer, a 30-year-old stripper graced with rhythm, shaved buttocks and the raw animal sexuality the cougars in the audience crave so desperately. He's not just a stripper, though. He's an entrepreneur whose trade is actually in carpentry, and his skill lies in making one-off pieces of furniture through found objects. I know it sounds horrible, but he's a man who can work with his hands. He has a number of businesses, works as a tradesman, but makes the most of his 'easy' money through stripping, all of which he's trying to save in order to start the 'real' business he's always dreamed off.

Into this world of baby oil, fake tan and conspicuous drug use comes The Kid (Alex Pettyfer), whose only attributes seem to be that he's young, attractive and lacking in direction. Well, that's putting it a bit kindly. He comes across as kind of dumb and destined for the gutter, and can't even make it through a first and singular day of work on a building site without getting fired. The Kid has a name, being Adam, and a disapproving sister called Brooke (Cody Horn), but not much else to recommend him. Mike takes pity on this fool and brings him into the world of being oiled up, objectified and leered at by brazen hussies with only one thing on their minds during their hen's nights.

Now, you might think that The Kid would find it really difficult to acclimatise to having copious amounts of money and women thrown at him, but he seems to take to it like a man-slut duck to water, and fits right in. The average age of the strippers seems to be late 30s up to 40s (I might be wrong, but one of them looked like long-in-the-tooth steroid happy pro-wrestler Kevin Nash, and he's definitely in his mid 50s), so this injection of hot young blood will surely make fortune smile down upon them.

I've heard tell that this flick follows a similar trajectory to flicks like All About Eve or A Star is Born, but, hey, not really. It's not an insult to mention this flick in the same breathe as the others; it's just that it doesn't really play out like that or have anything to do with those flicks plotwise or thematically.

Other than that they’re exactly the same.

At times you might think the focus of the flick is Dallas, the club owner who routinely and sociopathically talks and acts out about stripping as if he's actually having sex with the entire crowd and the other strippers simultaneously. At others it's about the rising and falling fortunes of The Kid, who doesn’t really seem to do or say much. But in truth, we’re not going to be surprised that the main focus is really Mike, since he’s in the title, and the flick is sort-of autobiographical. I’m assuming, though, that in Tatum’s case, he was The Kid and not his mentor figure.

After all, not many people can be their own mentor, really. Of all the cast, and of the three (or four, if you count the sister) main characters, Mike comes out of this best, and The Kid comes out the worst. I’m not entirely sure if it’s the character I disliked or if the acting was just shitty, because I’ve seen Alex Pettyfer, who’s a Brit, in other stuff where he hasn’t been completely terrible. I think he’s pretty shitty here, but because his character is a pretty shitty character, that’s okay. The problem is, allowing for immaturity, he is shitty to his sister and to Mike, who maintains a loyalty to him that perhaps is unearned, but it goes at least a long way towards giving some additional depth to his relationship with Brooke.

It’s mostly all Mike all the time, even down to depicting his relationship dealings with a slumming party girl (Olivia Munn) who doesn’t like answering questions about herself but loves doing drugs and having threesomes with him. These interactions aren’t meant to indicate love or anything so flowery, but they go some way towards softening his character, or at least keeping him far more likeable than anyone else in the film, and that includes the sister.

In a flick about stripping you wouldn’t think it would be the ‘sister’ role who’s going to be the judgemental scold. She comes across as moralistic and dismissive of what these chaps are getting up to onstage but more importantly offstage, but that’s really important in the context of this story. In any other flick about stripping the usual depiction of strippers lives would show the (female) strippers as a collection of damaged women with sexual abuse in their pasts, sexual abuse in their present, drug dependency, losing custody of their children and basically being treated awfully by a world that lusts after them but denies their humanity.

Here it just looks like a non-stop party of awesomeness, so someone has to stand in for the audience saying “This is no way to live, guys.” Otherwise we’d think it was the pinnacle of existence, and we’d have no clue as to why anyone would give it up.

The fact that we can see why Mike is ‘better’ than this, even though he’s great at his dance routines, without denigrating the people around him is a net positive for the film. We can all aspire to do ‘better’ with our lives for a whole host of idiotic reasons, but finding a solid motivation for getting out of a profitable rut where you’re being exploited regardless of your gender in these times of economic hardship should be celebrated, and this film gives us reasons to care whether the characters do that or not.

I don’t know if I understand at all how this film became such a hit, but it must have spoken to audiences, even if they were audiences of drunken women ogling the copious manflesh on display. And who can find fault with that?

Not me, and certainly not you.

7 times nothing except the fun, the money, the drugs, the women or the hours makes this look like a respectable lifestyle out of 10

--
"You are the husband they never had! You are that dreamboat guy that never came along!" - you are the guy who hasn't disappointed them yet - Magic Mike