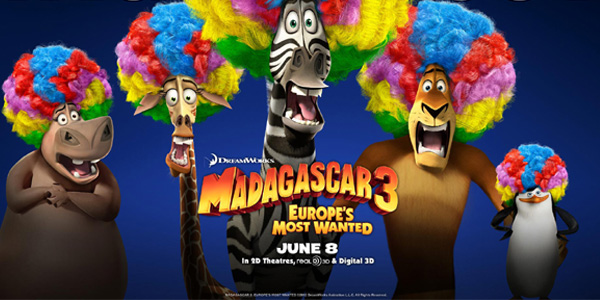 Now, are there any questions, keeping in mind that I
already explained about the hair?

You might be wondering why I'd be reviewing this latest instalment in the Madagascar franchise, since I've never reviewed any of the others. I don't know, do you ever wonder about stuff? Maybe you wonder why I review anything at all. Or maybe you're a particularly incurious person, or you came here accidentally looking for pictures of a naked Kate Middleton spanking Ryan Reynolds and Blake Lively on their wedding night as in the background Henry Kissinger reads Ginsberg's Howl to Lady Gaga on a tricycle covered in Vegemite and ambergris. They're out there, somewhere. Keep looking.

If so, how disappointed are you? Instead you find yourself reading a review about a kaleidoscopically colourful 3D kid's film, with none of the edge or sleaze you're used to from every other corner of multitude of tubes on the internets.

Compounding the many disappointments of your life, only some of which I'm responsible for, you'll find that this review will follow a time-worn pattern. Edging as we are towards school holidays in my neck of the woods, it means I will be seeing stuff like this and reviewing it (in order to get some additional value out of it), because I love seeing films at the cinema, and I love seeing films at the cinema with my daughter, but she's a bit too young to appreciate the intricacies of the works of Chanwook Park and Gaspar Noè, or revival screenings of Kurosawa or Federico Fellini films

What that means is, well, here's a review of Madagascar 3, that we saw in 3D! last Sunday.

Blah blah it's not Pixar blah blah almost purely for kids blah blah silly to boot. I've seen the first flick in this series, and most of the second, and while they're nice enough, they're pretty disposable. My daughter would get her angry face on if she heard me say that, but they're fairly manic and noisy affairs, long on gags and short on meaning, really.

This third one is a continuation of whatever the hell they were doing before. Same chaotic animal characters that seem less like characters than celebrity voices in some kind of animated form, same completely unbound potential for the story and the action to go in whatever direction the writers dream up. Yes, in a genre with sentient toys, houses that can be lifted with balloons, family-centric neurotic fish and talking cars it shouldn't seem out of place that a bunch of zoo animals can talk, plot and construct working planes and nuclear powered vans, but that's what we have. Suspend your disbelief at the door.

Obviously, it wasn't easy for me to do that. Well, maybe it wasn't obvious before, but the screaming cat is out of the bag it was meant to drown in now. I watched much of the movie with those glasses perched on my nose (the 3D is all-singing all dancing all the time, as in, they're aren't just sequences here and there that use it, it's the entire length, breadth and width of the flick, not that you can take the glasses off or anything) wondering why the flick wasn't giving everyone else a headache too.

The main characters in these movies are a lion, a hippo, a zebra and a giraffe. Then there are these penguins, and some monkeys as well. They started out in a New York zoo. They went to Madagascar. Then they got to Africa. Now they've ended up in Europe, obviously, for what I thought would be an opportunity for garlic and breadstick jokes. Instead, it's the Canadians they've got it in for.

The joy of these flicks, if 'joy' is actually the word I'm looking for, is that these animals can do anything they want. If a lion wants to go from the plains in the shadow of Mt Kilimanjaro to Europe without explaining how, he can. If a zebra wants to fly, he can fly. If penguins and monkeys wants to go to the casinos of Monte Carlo to make an even greater fortune at the roulette wheel, they can. And if they all want to join the circus, as some kind of complicated way of getting back to New York, then they will. There's no limit, no boundary, no glass menagerie ceiling for them to breakthrough. There's no impediment because, as Alex the Lion (Ben Stiller) tells his zoological brothers and sisters, they have passion.

I guess Alex is the main character, since he seems to be the leader whose strange motivations seem to prompt everyone else to action. At the beginning of this one, seemingly rendering the other two films moot, he decides, after a nightmare that sees him and his fellow critters aging because of the lack of a good moisturiser, probably, he urges everyone that they must go to Monte Carlo so that they can then go to New York. Perhaps Alex thinks New York's aura of awesomeness as the premier metropolis on the planet will physically prevent them from aging? Ah, the denial of death is a powerful, necessary delusion for our continued peace of mind, and the sooner children are introduced to it, the better, I guess.

'Okay' say all the other animals, we too want what you want for no reason, or we're coming along because we're contractually obligated to. They mysteriously turn up in Monte Carlo, where mayhem ensues, and they come to the attention of animal control officer Chantel Dubois (Frances McDormand, of all people) who is more of a Terminator than Arnie ever was. She jumps through walls and easily performs Matrix-style aerial stunts with one objective in mind: kill and mount the lion on her wonderwall. This might sound ludicrous, but it's topped by a bizarre scene where the French terminator warps into Edith Piaf, so that she sings the obvious song to a room full of her damaged officers, inspiring them to burst the bonds of their bandages so that the hunt can begin again.

How and why, exactly, she hunts them all over the world doesn't matter: she's just the villain that every (crappy) movie requires, and she's a supernaturally formidable one herself. I guess she's amusing.

The crew of animals end up joining the circus, because... Because someone thought it'd be cool if they joined the circus. Because the people making this thought it would be funny and not at all cliché for parents to walk out of the cinema with their eyes rolling uncontrollably as their kids uncontrollably tell them "When I grow up, I want to join the circus!"

The circus animals, well, the three that have something to say, are unsure about the motives and intentions of the interlopers, even though they end up becoming the circus's owners (!) Various stuff occurs, and what it reminds me of is the line from Hemingway that we should never mistake motion for action. There's a hell of a lot of motion, colour and noise, and action too, but as to what it all adds up to, I've got no idea. Other than a good time, I guess?

And the strangest insults in the film are reserved for both the Canadian work ethic and some awful Quebecois circus of human performers who had the audacity to take animal cruelty out of the circus experience. How dare they? I'm assuming they're talking about Cirque Du Soliel, as if it wasn't a self-mocking enterprise in the first place, but maybe I'm wrong. Those jokes / references they make during this flick got the biggest reaction from the adults in the audience, to the point where they were applauding somewhat derisively after this was said. I know it sounds weird, and I know it sounds weirder that I would think I could hear such a thing, but there we are.

The de facto union leader of the circus, Vitaly the Siberian Tiger (Bryan Cranston), is angry all the time, and throws knives and such at anyone that says anything near him for any reason. Why is he angry all the time?

Back story much? Well, I don't want to spoil things for you, the avid reader who wants to go into this film unspoiled, but suffice to say, and this isn't a distortion or an exaggeration, he once used the wrong lubricant when he was trying to squeeze himself into an impossibly small hole.

Yeah, I don't want to think about it too much either. And this smut is what passes for kid's entertainment these days? Jeezus…

Just kidding. I should point out that, as bemused as I sound in this review, and as bemused as I was whilst watching it, visually, it's a marvel. It looked great, and it's one of the few times where I've barely noticed I was watching a 3D flick because it was done in such an all-encompassing manner. The culminations of this, as senseless as it might have been as out of complete imaginative fancy and surreal perplexing out-of-nowhereness, in extreme circus like extravaganzas, are jaw-dropping in how they look. Sure, it recalls much, much earlier animated Disney flicks like Fantasia and Dumbo, but it just looked amazing. Even using a song by someone I can't stand as the Fireworks-like explosive climax forced me, against all my better judgement, to feel joy. It brought tears to my eyes even as I tried to physically stop my tear ducts from flowing.

How can I account for that? How can I explain myself, justify myself in the light of this?

I can't. I think this is a not very good entry in a mediocre but successful series, but I enjoyed it somewhat. My daughter was ecstatic for almost all of its length, literally jumping in her seat, so if her enthusiasm counts for something, then it's a ringing recommendation.

Of course it all doesn't amount to anything, but I guess it doesn't always have to. Fun counts for a lot in instances like this, and I'm not immune to fun, thankfully. No-one with kids should be.