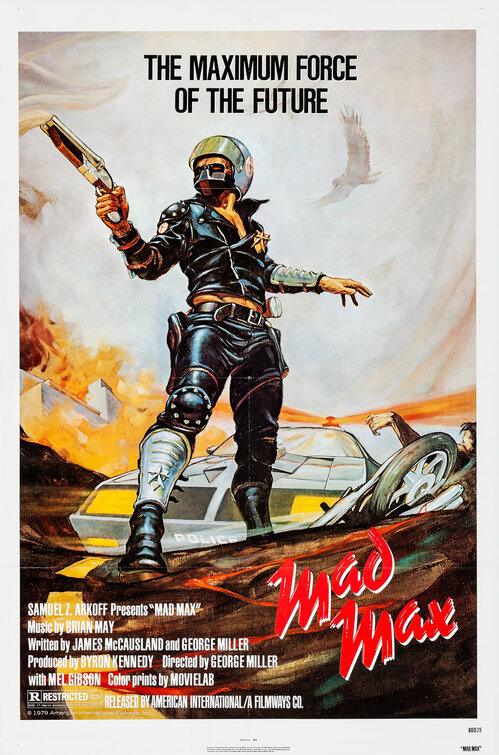 It takes a while for the revenge aspect of the story to kick in. See, before, the haphazardly connected car chases/crashes are just part of the job, but once enough bad things happen to Max personally, like his friend Goose (Steve Bisley) being burnt to a crisp, his wife and child being run down by the bikers, oh, and they kill his dog, then the shit becomes personal.

One especially amazing scene has Max venturing forth to the apartment of his chief, Fifi (Roger Ward) to hand in his badge, only to be greeted by the strange guy wearing something like an S&M PVC girdle-cumberbund pretending to water some plants with a watering can. He actually says at one point:
“They say people don't believe in heroes anymore. Well damn them! You and me, Max, we're gonna give them back their heroes!”

The acting, on the most part, is woeful and blowful. It’s amateur hour all around, except for Gibson, who, fresh from NIDA, already displays the charisma and badass qualities that would see him climb the lofty heights of Hollywood royalty.

The lunatic bikers are out of central casting, and would have been perfectly comfortable in something like a Roger Corman biker picture of the 60s. All they would have needed was Dennis Hopper as their leader, and the illusion would have been complete.

Instead they have Toecutter (Hugh Keays-Byrne), who looks like he would have been more comfortable as one of the singers in Abba, and Johnny the Boy (Tim Burns), who looks and acts more like he was lifted from the cast of mod classic Quadrophenia.

As cheap and cliché-ridden as the production is, as random and tenuous as the crappy elements are that even make this a story are, and as desperately put together as the whole thing feels, it does have an anarchic energy to it which perfectly situates it as one of the most important flicks ever made in Australia. And, most importantly, it has the singular distinction of being highly entertaining trash.

For hoons, petrolheads, and lovers of car chases, there’s the requisite fetishisation of cars and car engines. The moment where Max must cast off the shackles of civilisation and embark upon the dark path of avenging angel is perfectly complimented with his choice of conveyance. The black, hotted up Ford he uses in the film’s latter parts became the stuff of legend and probably caused as many wet dreams amongst teenage boys as the cast of Charlie’s Angels did at the time. Legions of men with undersized penises were born of this generation, who went on to make it their life’s goal to drive a car big and penisy enough to make up for what Mad Max told them they lacked. You know it’s true.

The climactic scene between Max and Johnny the Boy is a scene so tremendous that it deserved to be in a better film. It’s so good in fact that the lazy hacks who vomited up the Saw movies had to rip it off and make it theirs as well.

The scenery, as shot, is recognisably familiar (it was shot near Geelong, around the town of Lara), and the cinematography does capture enough of the character of our landscape to make it a recognisably uniquely Australian film. Even as incoherent and downright idiotic as much of the plotting and story is, visually the film is consistently excellent. It also keeps the ludicrous story grounded in a believable reality that Mad Max probably doesn’t deserve.

Of course film wankers mention it and put it up there with Picnic at Hanging Rock and The Cars that Ate Paris and other cinematic fare produced in the era that hesitantly proclaimed to the world that Australia could make films too, ya know. And it reached across the world and found an audience that no previous Australian flick and few subsequent ones ever managed to do. It infected the public consciousness, entered pop culture and remains a iconic signature role that launched careers and inspired even more knock-offs.

For that, and that alone, you’ve got to give it respect.

This flick used to hold the record for the most profitable ROI (return on investment) in terms of box office. It compares the amount of money it took to make it ($300,000) with the amount it made at the box office (way over $100 million). That was until The Blair Witch Project came out and scarred / scared the world with its cheap theatrics, painful overacting and runny noses. There’s a reason why Mad Max connected so tremendously with people. I’m not sure exactly why that is, and I’m never going to accept that it’s actually a well made flick, but I have to begrudgingly give it credit where credit is due.

6 anti-Semitic, alcohol-fuelled tirades out of 10

--
“What a turkey! Hey, fella! You're a turkey!” Goose, with more of the Shakespearean dialogue present in this flick, Mad Max.