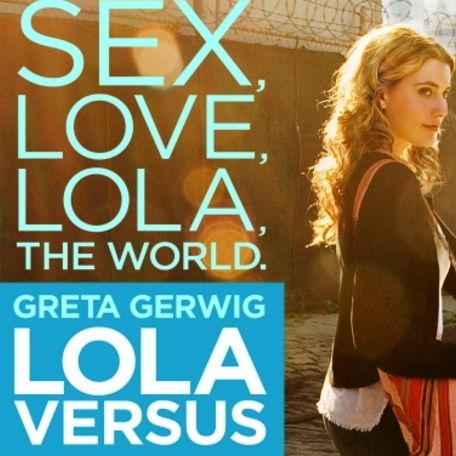 My money's on Lola for the win, or at least a draw

Now, this film isn't a million miles away from the Australian flick I reviewed the other day whose name I refuse to repeat right now. Suffice to say it involves characters in their late twenties questioning what the heck they're doing with their lives, in a manner that is meant to be entertaining and edifying for us shmos in the audience.

This one does a much better job, even though it's not immediately obvious as to why. It's just as pretentious and filled to the brim with annoying characters overflowing with affectations, and it has a murky path with a dubious destination in mind, and doesn't really have a lot of substance to it.

That hardly matters because, at the very least, the main character in this instance, called Lola, surprisingly enough, is actually quite likeable even if she is something of a fuck-up, and it's actually enjoyable to spend time with her, most of the time at least.

No, I'm not playing gender favourites here, nor am I letting my growing admiration for Greta Gerwig's talent colour my vision. I think she's delightful, though I've already seen her in stuff that I've hated (Greenberg being the primary one). She has a charming manner about her, melding obsessive neuroticism with an unselfconscious manner (totally studied) that I find very engaging. I thought she was wonderful in Damsels in Distress, and Lola Versus only advances my belief that she's wonderful in films even if what she's in is fairly slight.

Lola Versus is that fairly slight flick, even as it deals with emotional drama and interpersonal conflict between a bunch of New Yorkers. Not just New Yorkers, but ones seeming to live in the Greenwich Village - East Village area. In other words, hipster douchebags. Lola and her crazy-in-love boyfriend Luke (Joel Kinnaman) are about to get married in the film's opening moments, only for Luke to pull the pin.

We don't find out why, but Lola is quite devastated, and it makes her 29th year far more complicated than she thought it would be. She's wrestling with her obsessive feelings towards Luke, her growing feelings for her best friend Henry (Hamish Linklater), and her intention to finish her PhD dissertation. Her only other apparent friend is a strange and demented woman who makes odd sexually disturbed statements at very random moments. This person, Alice (Zoe Lister Jones) very randomly mutters such proclamations as "I have to go wash my vagina" absolutely apropos of nothing, and acts somewhat like a schizophrenic. What I find oddest about this characterisation, which perhaps isn't as funny as the people involved think or hope it might be, is that the actress not only is in a relationship with the director, but she also co-wrote the script.

You'd think in that situation that she could give herself some better dialogue, but maybe it's not that easy. All the same, she's not the main character, so she falls safely into the 'irritating friend of the main character' category that can often be tolerated, if not enjoyed. She offers a shoulder to cry on and strange, often bizarre solutions to help Lola with her grief over the relationship ending. Add that to the advice offered by her hippyish parents (Bill Pullman and Debra Winger), and you can see why Lola doesn't have a chance.

The thing is, though, Lola is kind-of her own worst enemy, and she's enmeshed in her tight-knit clique so that every action and inaction has immediate repercussions. She's not a drug-addict, or a cruel person, and she's not experimenting for the sake of it. She's confused about what she wants and what she needs, and how is that confusion expressed? Why, though sex, of course.

It's not just merely a upper-middle class over-educated under-employed milieu kind of story (though you're not going to be able to see much of a difference between this flick and Lena Dunham's work with and the HBO series Girls), though it's perhaps trying to capture a time, a luxurious time, in the lives of urban hipster douchebags.

Yes, yes, we could go on and on about the extended adolescence stuff, and adults shirking responsibilities and commitments and waiting too late, Peter Panning their way past their 30s and such, but that shit is overstated and overplayed, and plus I still remember when all these pejoratives, tut-tutting condemnations and descriptions were equally applicable to me. They're still probably applicable, but I'm remembering sort-of what this all felt like about fifteen years ago (for me - ah the 90s). It felt like a time when you weren't sure what you were going to be doing with your life or where or with whom, when money was scarce and your relationships with people transcended and dominated everything else, including work. You could leave a job, and that wouldn't be anywhere near as serious as an argument you'd had with so-and-so, which caused friction with this and that friend. And plus there was all the goddamn sleeping around, which was great, but you never knew which occasions 'meant' something as opposed to those that didn't (but you thought they did, or they thought they did).

See how disordered and confused that last paragraph was? That's what that time (at least to me) was like, and I think this flick manages to capture that feeling and that 'time' of life without too much melodrama or quirkiness. Maybe that's why it resonated with me, and maybe why I found Lola a relatable character, and not an objectionable one. It's not like any of these characters are that fleshed out, but at least Lola and Henry are believable, and their eventual conflicts make sense, emotionally, at least to me.

Lola gets into a frame of mind, with unfortunate help from her parents, whereby she sees that the solution to all of life's problems instead of the cause of them, would be to have sex with enough other people around her to find out what she really wants in terms of a relationship, or sex, for that matter. Perfectly fine advice, I know, except from the puritanical religious perspective where you're supposed to find someone you have no idea as to whether you're sexually compatible with, marry them and stay then with them for the term of your natural life no matter how poorly things go. The problem is some of those people she sleeps with are odd, nuts, manipulative, or they have human feelings, and they mostly have connections to the other people around them, so everything tugs the web of connections to someone else.

That makes it sounds like I'm absolving Lola of responsibility for her actions, which I'm not, because some of the stuff she does is motivated by jealousy, sometimes by just selfish need, but her actions remained relatable the whole time, for me.

Hamish Linklater, who doesn't really play a character that different from the one he played in The Future, that perplexingly pointless Miranda July flick from several months ago, is much more enjoyable here because the film is more enjoyable, at least for me. He's the decent guy in the scenario who loves Lola but sees that she is sometimes willing to take his friendship for granted in order to give herself the illusion of control over the people around her. I felt bad for him more than anyone else at one point, and that includes Lola, who, if we don't sympathise with, the flimsy construction falls apart completely.

That's obviously not the case for me. I found this far more relatable and enjoyable than the similarly themed Any Questions for Ben? despite the obvious abundance of stuff I was obligated to relate to, like the protagonist being male, in Melbourne, and an inner city hipster douchebag. It probably says more about me than the films involved, but that doesn't completely discount my thoughts about it, does it?

No, of course it doesn't. In Lola Versus (the world, presumably) I cared about what happened to the characters, and enjoyed the low-budget but still beautiful shots of New York and its environs, and understood where the characters were coming from, at least to some reasonable extent. And I laughed at some of the humour and quirk (like a drunken and vengeful Lola wielding cheese and malt liquor on the streets of NY), but felt sad when she realised, just after a particular sex scene with her ex-fiancé where she'd seemed liked everything had gone okay, only to have her realise just how sad that temporary happiness made her.

This flick is not going to set the world on fire, but nor does it need to. Lola Versus cinematic and emotional mediocrity, and Lola wins.

--
“I’m sorry, I just can’t stop looking at it” - neither would we, given half a chance – Lola Versus