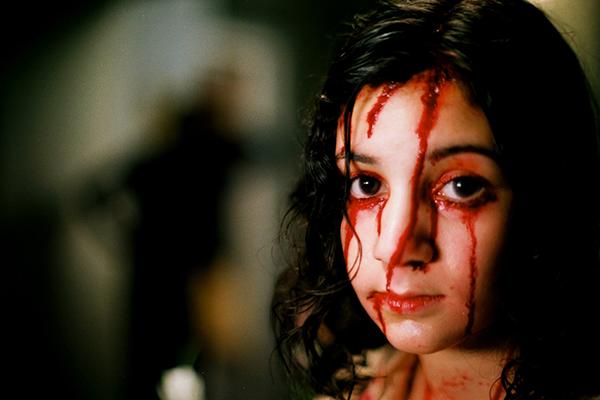 So nothing radically new there. The difference is in the telling, and in the way we are meant to care not only about the vampire, but the main character, a human boy of only 12 years of age.

Oskar (Kare Hedebrant) is a dull, dull boy, all blonde and fey, and very much at the mercy of school bullies. When we first meet him, he’s clutching a knife, repeating the words we presume his tormentors torment him with, dreaming of the day when he could fight back. But he can only say them when there’s no one around, least of all the people he wishes he could same them to.

No one likes being bullied. Except maybe masochists, I guess. At the very least, despite the fact I suspect Oskar is a bit of a masochist, his life is pretty shitty. Not only that, but he’s also trapped in the 80s, and in socialist government housing that would crush anyone’s remaining spirit.

In this horrible housing complex, which isn’t that bad, just dull, some new arrivals set up shop; an old man (Per Ragnar) and a young girl around Oskar’s age. One of the first things we notice the old guy doing is the meticulous taping of cardboard to the apartment’s window. Wonder why he’s doing that.

The second thing we notice the old guy doing is the setting up of a tool kit / doctor’s case that would make any serial killer proud. And we get to watch him go to work, incompetently, it turns out.

The girl, Eli (Lina Leandersson) meets with Oskar, plays with his Rubik’s cube whilst also being all mysterious about why they can never be friends. Of course they do become friends, otherwise the story would be very, very short.

At least, as far as it involved Oskar. We realise, looking back (perhaps if you know enough about it beforehand), that at that first meeting between Eli and Oskar, she is very hungry, so hungry in fact that it’s clear Oskar could have died right there and shortened the flick by about an hour and a half. Though Eli doesn’t feel the cold at all, her laboured breathing and rumbling tummy show us that she is under some duress.

Of course Oskar is oblivious to all this, and is just happy that he has a new friend, even if she looks and smells like she’s just climbed out of the grave.

When his bullies escalate their bullying, it leads to a strange scene that I am still having difficulty deciphering even now. His main bully is a dull child called Conny (Patrik Rydmark), who understands, as a world-class bully would, that if you pick the right victim, they’ll never snitch on you, and they’ll never fight back. Even, to some strange extent, they might actually start enjoying the humiliation.

I know how strange that sounds, but a scene where Oskar gets slashed across the face and looks positively rapturous about it confused me greatly.

Eli, of course, senses this aspect in Oskar as well, but urges him to instead fight back against his tormentors, because she knows he’ll always be their bitch if he doesn’t do something about it. She’s coming from a very different place, though, as, you know, a murderous blood-drinker who may look like a child most of the time, but is probably hundreds of years old. She’s presumably seen her share of victims, though she implies she was something of a victim herself before she changed into the sometimes hideous thing she has become.

Though clearly a vampire film, and perhaps even a horror film, for lack of a better label, this shouldn’t be mistaken for an action film. Oh, blood certainly does flow, and people are violently cast off of this mortal coil, but the film on the most part transpires in stately calm, with long static shots enhancing the mood but also adding to a building tension as you wonder what it is building to.

There is something interesting, something different in setting such a story with a young set of protagonists. For someone Oskar’s age, Eli might seem like an oasis in an otherwise shitty life, and he is also young enough to assume Eli is mostly what she appears to be, a strange but vulnerable girl. He’s also young enough to be repelled by her true nature, and to be cavalier about it when it amuses him (as with the scene where the invitational nature of a vampire entering one’s home is put to the bloody test), but he can also regret his callousness almost immediately.

He is still a child, however, and that’s one of the special differences between this and the other conventional tellings of the tale. Quite often the vampirism thing is so intensely wrapped up in the whole Romantic / sexual construct designed to give middle-aged women something to masturbate over in the bath (I’m not just talking about Anne Rice) to the extent where it’s almost a relief to have it excised from the story. Its absence is not missed on my part.
By the same token, clearly there is love between Oskar and Eli. He, at least in my eyes, comes to love her not comprehending or caring just how many people she has either killed or had killed for her benefit over the course of her lifetime. He doesn’t care, because Eli is the only one who cares about him. His parents (yes, he’s the disjointed product of divorce) seem nice enough, but are more concerned with their own lives, and rightly so. His father especially, who seems to live in what passes for the icy boondocks of Stockholm, is either a drunk or gay, as far as I could work out, or both, in another of the film’s strange indecipherable (to me) moments where his dad and a neighbour drink and might have been making goo-goo eyes at each other.

I don’t know, I lack the intensive knowledge of Swedish culture and society I might have needed in order to figure stacks more elements of the story out. There’s a reoccurring joke about a teacher called Mr Avila who routinely mispronounces Swedish words to the merriment of children and staff, but not knowing what I guess would be obvious to Swedish viewers (that he’s Norwegian, that he’s the Swedish version of a non-union Mexican equivalent?) means I’m denied the honour of joining in on the thigh-slapping, rib-tickling and splitting of sides.

About the only laugh I got was during a scene I assume wasn’t meant to be funny, where someone is attacked by a whole bunch of CGI cats, but what do I know, I’m not Swedish.

It’s not a comedy, intentionally or otherwise. It’s a drama, coated in a thin veneer of dread, snow and bloody carnage. The nastiest scene doesn’t even involve a vampire, seeing as it depends on Eli’s old protector wanting to prevent people linking him to Eli, by obliterating his own identity with a canister of acid. Very nasty.

The other factor I enjoyed was the ambiguity, which I’m certain will disappear in the inevitable Hollywood remake slated for release in 2010, as to the whole bullying thing. Sure, if movies have taught us anything it’s that it’s important to be yourself, as long as that “yourself” is something acceptable to audiences, and that you have to stick up for yourself in order to be respected and admired and whatever else. The thing is, in many cases if you stick up for yourself against a bully, that bully’s going to have friends and family who will potentially kill or maim you in their stead unless you own a gun.

Like any decent prison film, Let the Right One In shows that it’s all well and good to stick up for yourself, but in the end you have to have an even more powerful bully on your side if you’re going to survive. So whether you join La Raza, the Aryan Brotherhood, Nation of Islam or ally with an inhuman killing machine who looks like a 12-year-old girl, make your choice and stick with it.

It’s an odd film, but an enjoyable one, and is probably the best vampire-related flick I’ve seen since Shadow of the Vampire oh so many years ago. It’s slow going, so don’t be expecting something which gets the adrenals jumping. It’s more about a chilly mood permeating the screen and into your heart, making your care about a monster because you care about the child she / he / it is protecting. It’s discomforting, but that is not to the flick’s detriment at all, if anything it’s very fitting.