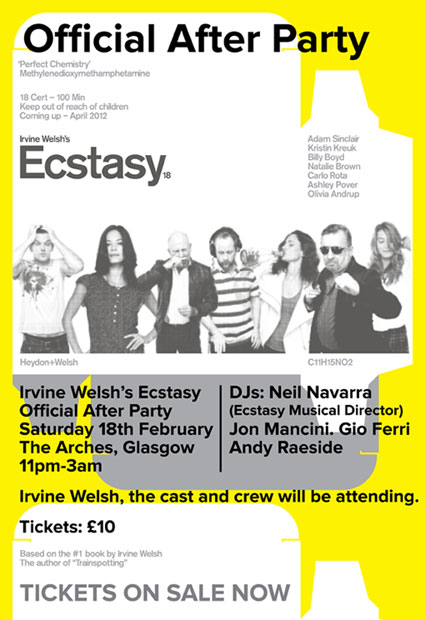 They're trying to remind me of something... not sure what

I approach anything to do with Irvine Welsh with a great deal of trepidation these days, but I was curious to see this, since I recall reading the book way before my fear and loathing for Welsh began.

And what I recall is that the book had three stories, one having to do with some hospital plagued by a necrophiliac and a romance writer, the other to do with some armless girl rendered armless in utero due to some Thalidomide-like chemical and the football hooligan she enlists for revenge, and a third story I don’t remember that well.

That third story alone serves as the basis for this flick, which follows the adventures of ecstasy gobbler Lloyd (Adam Sinclair) and the various addled people in his life. It’s a good thing, too. My main reason for losing interest in Welsh’s writing is that I just can’t handle the sexual horror stuff he dreams up and messily expels onto the page. Everyone has limits, and I reached mine a long time ago with him, even as I acknowledge Trainspotting to be a landmark book (and subsequent film).

Everything he ever does will always be compared back to that achievement, and, conversely, all drug films are compared back to Trainspotting. It would be a mistake to assume that this flick attempts to do for ecstasy what the earlier film did for heroin. It does go some way towards depicting something of life in Edinburgh, and it certainly tries to embrace and express the euphoria of the drug and the scene. It’s a moot and pointless point to argue over whether it glamourises the drug specifically or drugs in general. It admits the drug is fucking great, but that there are downsides to taking it with compulsive regularity.

So it’s not an after-school special showing an innocent teenage girl taking the drug once and dying from organ failure on the floor of some club, or some guy taking one tab, getting gangbanged and then throwing himself off of the highest point of Edinburgh Castle. I’m not going to go so far as to argue that it gives a mature or realistic depiction of the drug and its effects either. All I can say is that it’s not particularly moralistic about it all, and who can blame them.

For a film set in Scotland, there are an awful lot of Canadians in this flick, so much so that I started getting the feeling that a lot of scenery-establishing footage, lots of postcard shots were taken in Edinburgh and Amsterdam, and then much of it must have been filmed in Toronto behind closed doors. Otherwise, I can’t see the economic sense of paying for the airfares of superstar Canadian megahunks such as Stephen McHattie and Colin Mochrie. Rwaor!!!! Ladies, get back, they’re spoken for!

Lloyd is likeable enough as our protagonist. For the protagonist of an Irvine Welsh story, he’s neither a psychopath nor a rapist, so we’re already doing well. He seems like a nice enough person, but he’s got 99 problems just like the rest of us. As an avowed lover of pills and clubbing, he’s not blind to the fact that he is aging, that the feeling of joy and connection he gets on pills is illusory, and that chemical dependency isn’t necessarily the ticket to fulfilment (his alcoholic father provides the perfect counterexample). But he’s just having too much fun.

He’s also deep in debt to the local drug dealer Solo (Carlo Rota), who’s like all the scumbag drug dealers that exist in the cinematic universe. Unattractive, violent, unable to deal productively with frustration, greedy, also punches women in the face for no reason, he’s truly a Renaissance man, for Edinburgh at least. This debt requires Lloyd to work as a drug mule from Amsterdam back into Scotland, bringing in all that precious, precious e.

We get a bit of voiceover at first, I mean, how else to deliver the honeyed words of Welsh to our grateful ears in a movie without printing text on the screen? In it Lloyd explains, at least during the smuggling bit, the theory of how it is he convinces various and sundry people that he’s a clean punter. It comes down to confidence, apparently, which is comforting, because it means I’ll never be asked to perform such work, considering the complete absence of confidence in every molecule, fibre and scintilla of my being.

Lloyd’s obligations, which he doesn’t seem to take that seriously, never stop him from having a good time. Apart from regular clubbing, we see him eating pills pretty much at any time of the day or night. There never seems to be a downside or a comedown for him at all, I guess because whenever he could be coming down, he probably eats another pill.

The difficulty with such a story, and the reason I liked how it was done and respect what it did, is that it’s easy to represent a downside in a way that distracts from some kind of convincing display of character. In other words, it’s a piece of piss to show the downside of drinking by showing someone throwing up, looking deathly hungover, or pissing themselves. It requires a whole different dynamic when the side effects include euphoric greatness and feeling love for all and sundry all the time.

There’s no obvious downside for him, but one person in his circle, Woodsy (Billy Boyd), eventually loses his marbles. It’s not that much of a cautionary aspect, since for every one pill Lloyd seems to take, Woodsy is chewing on dozens.

Lloyd feels a deep, overarching connection with people, with the DJ, with the music, with the night, with the day, with the alcoholic dad who disgusts him, but he’s aware it’s the drug that’s feeling stuff for him, so that he doesn’t have to. We watch a long and involved sex scene with another user, and it looks, despite being sped up, and despite both participants wearing earbud headphones to listen to music whilst passionately fucking, which, in practice, wouldn’t work for more than a few seconds at a time, and it looks like the best sex session in the world. Who wouldn’t want that?

Well, when Lloyd meets Heather (Kristin Kreuk), he feels completely stunned by her, but as they navigate aspects of their relationship (and the lurking drug dealer threatens to poison everything they might have), she forces him to figure out whether they’re capable of feeling anything for each other without relying on the intermediary of chemical romance. Anyone can feel love on MDMA, since that’s the point. They can love the feeling of a carpet on their cheek as much as the sound of a certain word in their ear or anyone sucking on their clit, but what hope is there in feeling that for a specific person away from the drugs when you’re gobbling pills the way the Cookie Monster gobbles cookies?

I don’t think the way the story gets this across is anywhere near as weak as what I’ve made it sound. To me it’s actually an interesting idea, and one I enjoyed watching explored, even if I didn’t particularly care about his relationship with Heather.

In the short story Heather is a somewhat more interesting character. One of the elements I remember from the book is that Heather’s separation from her husband, prior to meeting up with Lloyd, has more complexity. One of the reasons why her character feels alienated from her middle-class aspirational husband is because in conversation with other people, he lies about the football team he'd supported in his youth, up to the present. This little detail, this falseness becomes a fatal flaw through which she stops being able to see him as a man she can tolerate being with any longer, regardless of the other issues.

Here she doesn't even have anything as interesting as that little example of quaintness to embellish her character with. She's just a Canadian girl who leaves her cheating husband and who bumps into a very handsome guy in a club out of his mind on ex who tells her he loves her upon meeting her and means it. Well, he means it as much as these things can be meant. Eventually, after her euphoria wears off, she tries to figure out how much that's worth.

And therein lies the crux of the story. There are other elements in the film, some ironic, some just ugly, but that central struggle is enough. As I implied earlier, if the flick's about one person in a relationship wrecking themselves with smack or booze, it's easy to see why their partner might not be happy about it. When it's about a guy who is artificially enhanced at all times, and just wants to devote themselves to worshipping you and clubbing, it's harder at first to see what they're objecting to. And when that case is made, it's a good one, as is Lloyd's eventual explanation and his eventual path.

The film looks great, as in it's very colourful and such, and the clubbing scenes gets the whole crowd-peaking stuff right at least visually, even if it all looks a bit dated. Hello 1990s, we barely remember you. The constant tourism bureau shots of Edinburgh, of the castle and of the view from Calton Hill, especially from behind the Dugald Stewart monument are perhaps excessive, as it seems Lloyd hangs out there, pensively staring out over the town, almost every day, but who's complaining about awesome footage of Edinburgh, eh?

Not you, that's for sure.

I really liked the guy playing Lloyd. He looks so much like my landlord that it's a bit perplexing for me. He just really seems to embody this character, and the film is the better for it. He spends a lot of time looking joyous and joy-filled, and that's hard to act all the time, unless of course he was actually on pills the whole time. He seems like a decent actor who deserves plenty more work and the adulation of men and women everywhere.

If it's saying anything, as it fades into the pleasantly exhausted white of an impossibly joyous morning, it's something very different about life and about love. Also, it's a bit more honest about it all, since there's a damn good reason people gobble those particular pills like they're candy, isn't there, my brethren and sistren?

--
"Think of me when you're coming down, but don't look back when you're leaving town, today" - There Goes the Fear by The Doves