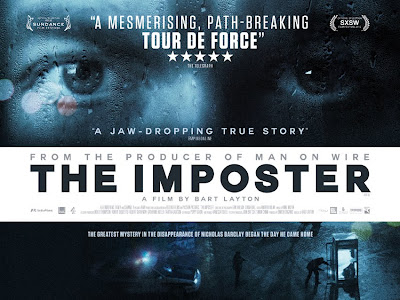 Gaze into the eyes of a psychopath, and despair

At their worst, documentaries cover something that happened in the most turgid, lifeless manner possible, sending the facts even further out of reach and serving the self-interests of people trying to impose their horrible view of humanity all over the rest of us.

At their best, they illuminate the confusion that confronts all of us in the face of not what happened at particular points in time, but why. It’s not the sole purpose of documentaries to answer questions, or to say “This, then this, then this”. Sometimes they succeed best when they still leave us wondering “what the hell were these people thinking?”

The Imposter is a documentary about something that really happened, in which most of the facts are not in dispute. Let’s say 99% of the facts are not disputed. With the family involved, and the imposter of the title, none of them are denying that any of this happened. What none of them can genuinely answer is the “why” of it all, and that doesn’t detract from the experience in the slightest.

A boy goes missing in Texas, in the 1990s. A ‘boy’ in Spain is found by police, who claims, eventually, to be the missing Texan boy, Nicholas Barclay.

How bizarre, eh? We’re not under any confusion as to whether this chap was actually Nicholas Barclay. I mean, the documentary is called The Imposter. Also, this guy, who talks directly to the camera, has a strong French accent. He has brown eyes, whereas Nicholas has blue eyes. This guy’s also clearly an adult.

There are actors in this, in small recreated bits, but mostly we see the family of Nicholas Barclay, his sister and mother, the FBI agent who become involved, and, in the main, pseudo-Nicholas Barclay with his oily French non-charm, admitting what an unrepentant scumbag he was from the beginning to the end of this saga.

How he did it is fascinating, in terms of the number of elements that had to be overlooked by the US authorities for this to have gone ahead, and the incompetence of the Spanish authorities in allowing a conman access to their offices and phones in order to concoct this incredibly bizarre long con. Why the family overlooked all the obvious signals pointing to his identity is a whole other matter.

Of the family, it’s the sister Carey Gibson who talks the most, and with the most embarrassment over what happened, and then there’s the mother as well. Yes, you can feel their embarrassment wafting off of the screen, but I think it's to them that we listen the most keenly. Of all of the people involved, you'd think that they would have been the ones best place to know from the start that this fucker wasn't who he said he was.

I don't deal with liars every day. I don't work in the court system, or with people who have substance abuse problems, or with politicians. I would like to think that I can pick when someone's lying, like that guy Tim Roth used to play in that sometimes wonderful, often terrible show Lie To Me. I had no idea here. For the life of me I still can't figure out how this all happened, even as they explained to me, and everyone else who watched it, what happened.

I don't think it's even a matter of figuring out who's lying within all this. As previously blurted, everyone admits what happened, and we know the French fucker lied from birth onwards, his first 'waaaaaaahhh' being a lie. In the face of such a strange story, though, I can't help but approach it by taking it at face value. When you think about the fact that the cops should have figured out right from the start that it was a scam, you're not thinking something unfair or unreasonable. US Embassy staff and FBI agents getting involved and not seeing that it was a scam is even more embarrassing for all involved. It's something that would haunt your career evermore, you'd hope, as the prime example of how ill-suited you are to continue in it.

Is it unfair to say that, as someone who's never been in that position before, and likely never will be? A little bit, but the thing is, this guy, this Guy is clearly no criminal mastermind, he clearly had no gift of the gab in English, at least, doesn't really seem to have any charming looks or qualities to dazzle people with, and deflected reasonable questions with the most cack-handed, brutishly inelegant methods possible.

Don't look like the person you're claiming to be? Well, just wear your hoodie and baseball cap all the time. Eyes don't match those of the person you claim to be? Easy, just claim that you were kidnapped by an international ring of child abusers who somehow used Technology-laden needles to change your eye colour. Can't explain why you, as a native Texan now speak English with a thick French accent, and why you, a man in your twenties, no longer look like the teenage boy you're claiming to be? Piece of piss: it's because you're so traumatised, you see.

How does any of that explain why Nicholas Barclay's family bought that he was their son and brother? It doesn't. And they're the first to admit that hope blinded them so completely.

Yet even that doesn't make any sense, really. This charade went on longer than you think possible, but it doesn't seem possible that it could have happened in the first place. The film doesn't want you to judge them, for most of its running length, because it spends most of its time focussed on the smarmy, shit-eating grin of the sociopath who perpetrated the hoax.

The film makes the wise decision to spend a lot of time filming him straight on as he talks to the camera, in the grand tradition of people telling you they just need a little bit of money to catch the train to Bairnsdale despite the fact that they're looking you straight in the eye and lying shamelessly to your face. He does the same to us. He's lying even when he's telling the truth. The facts of what he did, and even his reasons for it, sound more unbelievably than if he'd said he was doing it all under orders from the lizard people who secretly rule the world from the underground cathedral under Big Ben.

Really, it's Carey who comes across the most believably because she's the one most sheepish about what happened. She and her mother are the first to admit that their fierce need to believe that Shlomo Finkelstein, sorry, Frederic Bourdin was Nicholas compelled them to let all these obvious niggling details slide. Whether it's true or not, it seemed genuine to me that Carey is intelligent enough to figure something like this out in time, but trusting enough and willing enough to suspend disbelief for something like this because the possibility that someone would lie about being her brother seems way more unlikely than the alternative.

I mean, I can joke about everyone involved having their heads stuck up their arses for believing any part of this elaborate and quite shaky charade, but does the reality of it seem any more likely? The 'resourcefulness' of Bourdin allows him to concoct a scenario to his temporary benefit, because why would anyone believe some guy elsewhere in the world would say they were Nicholas if they weren't?

I'm leaving out something crucial, something beyond spoilery, and yes, I'm going to keep it that way, because the 'theory' that Bourdin comes up with to explain why the family accepted him, a convicted liar and career conman, and the private detective who unmasked him called Charlie Parker (not that Charlie 'Bird' Parker) come up with isn't plausible. When I say it isn't plausible, I mean that if Frederic Bourdin told me that the sky was blue and that water was wet, I wouldn't ever believe him even if my own eyes and fingers told me it was so. It could very well be a reasonable explanation of what actually happened to Nicholas Barclay, but you know what? In the immortal words of Nicholas's sister Carey: "FUCK HIM!"

I found this documentary engrossing and utterly fascinating. It says a lot about people without having to ever whack us over the head with it or use sober, Frontline-like voiceovers to tell us what we're meant to be thinking at any stage.

Still, the thought we end up having is "People sure do suck."

8 times I don't believe that guy for a second, but I am definitely interested in buying a bridge he's selling out of 10

--
"A new identity was a real passport, an American passport, I could go to the US, go to the school there, live with that family and just being someone and don't never again to to worry about being identified." - why couldn't you just jump the Canadian border like everyone else - The Imposter