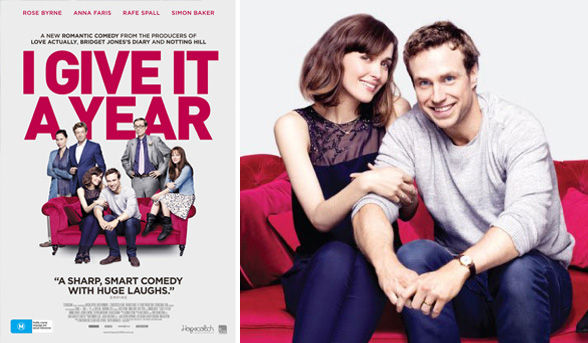 As the flick started, and I saw the words Working Title Films come up before the credits, I immediately thought "oh shit, we could be in store for another Love, Actually kind of rogering. Working Title has made plenty of the flick's your mother and grandmother liked back in the day, like Four Weddings and a Funeral, and Bridget Jones' Perversely Continuing Diary. They've also made some half decent stuff as well. Love, Actually isn't part of the half decent basket, beginning and ending as it does with hugging montages. And there's always the last-minute 'running to tell someone you're meant to be with you love them just before they catch a plane/bus/gondola/spaceship' used 15 times in the one film.

Little did I know that the scenes at the beginning of this film, displaying as they do the brief and thrilling courtship of the two lead characters leading up to their marriage, are the best, most human bits of the film.

After the title itself drops, I Give It a Year, and we immediately understand that this refers to the fact that no-one around the lead couple think they're going to last at all, three minutes into the film, from which it's all going to be downhill.

Nat (Rose Byrne) and Josh (Rafe Spall) are horribly incompatible as a couple. Whenever they're around each other, the physical structure of the universe surrounding them seems to pulse and recoil the way our bodies try to expel our stomachs and intestines out of various orifices once we've got food poisoning. I'm not oblivious to the fact that the whole point of the story is that they're not compatible, and, in fact, hate each other and are pretty repugnant whenever they're around each other. That's obvious. I get that. It's hard to miss. As you're watching it, however, you're compelled to think "what exactly are we meant to be hoping for other than death?"

In anything that's even vaguely a romantic comedy, like this is, though it might be its polar opposite, you're meant to be hoping for something. You're hoping the people who are 'meant' for each other will somehow get together at the end, no matter how predictable the path to that end might be. In more sophisticated, more mature stories of this type (ie arthouse crap), we hope against hope that they get together, though pride, or societal pressures or duty to something or someone means they never will get together. That's the essence of tearjerkeriness, right there.

In I Give It a Year, we sure as shit couldn't possibly "want" them to stay together. I can't make a compelling case that we're meant to "want" them to get together with anyone else either. They're deeply shitty people. They should be isolated, not encouraged to overcome their personal issues and become better people. Throw them in solitary and forget about them.

The two leads are given alternates as well that we're meant to think exist as some kind of temptation, or a better path to happiness. One's a creepy billionaire (Simon Baker, the mental Mentalist himself) and the other is a dippy activist with a face mangled by plastic surgery despite the fact she's in her early thirties (Anna Faris). Though Nat and Josh act slightly less like horrible people around these two other choices, what the fuck do we care who hooks up with whom in this case. Investment in any of these people, even a micron of emotional investment, is impossible, utterly impossible.

So, it's meant to be a comedy, I guess, more than a rom com. Fair enough. Then where's the goddamn comedy? No, that's not fair, they tried to make me laugh a few times. They made me laugh fewer times than that. The comedic set pieces are pretty stupid, and only one of them is nonsense even for a comedy. If you were trying to seduce a a bony married woman, why would you release doves in a closed room with a fan on, unless it was so they would fly into the fan? Are you trying to entice her with death and pain? Maybe that was the way to go, maybe she's got a sadistic streak. It wouldn't surprise me.

But it smacks of being a joke that the writer(s) thought up like this - "this lunch seduction is too dull, we need something funny to happen. Why don't we get a waiter to release some pigeons? I don't know where the fuck the pigeons came from, but wouldn't it be funny if they started flying and pooping around, and then flew into a heater? A blender? A microwave oven? No, a fan! Make them fly into a fan! That'll be brilliant. What do you mean it doesn't make any sense and isn't funny, how dare you, do you know who I am etc etc"

The second attempt at something funny occurs when Nat and Josh are visiting the in-laws, who rightly loathe Josh, and the possibilities for hilarity increase exponentially when a digital picture frame comes into the picture. Travel pics from the honeymoon on a flash drive are inserted into the frame to show how it works. As they chat, and images from the holiday slideshow by, Josh notices before his in-laws that there are a few other pictures in the sequence that perhaps weren't intended for public viewing.

This presents Our Hero with a dilemma, a Gordian Knot of a problem. His essential question becomes: which is worse, being seen to calmly take out the flash drive from the frame and saying "Let's put up images from your last colonoscopy instead", or is it less horrifying if I let my mother and father in-law see images of their daughter blowing me and getting drilled doggie-style?" Hmm, only a sage of Solomon-like wisdom and Confucian brilliance would be able to solve this one.

Stupidity and humour are not mutually exclusive, in fact they're mandatory, but there's far more of one from lazy hacks than there is of the other throughout. Stephen Merchant's presence in this flick is the most galling. There's always the boorish, creepy best friend character in all types of films, whether they're called Stifler or Ben Affleck or Banky or Silent Bob or Billy from Seven Psychopaths, but they have to be funny to justify their boorish creepiness. Merchant is an incredible funny man away from this film. He is so unfunny here it's almost self-sabotage. It's almost like they isolated what makes him funny and got him to do the complete opposite.

If there was a funny moment, it's probably when the primary couple's marriage counselor reveals herself to be profoundly ill-suited to her chosen field of expertise. It's not subtle, but no-one could come to a film like this expecting anything close to subtlety.

It builds to an ending that is as profoundly obvious as it is unsatisfying, because the ideal ending would have involved the deaths of most of these despicable characters. It is not an edgy ending, it's not subverting the genre, it's as painfully hacky as every other aspect of the story. It's a shameful waste of the presumed talents of so many people.

To say that I hated this film on a deep and profound level would probably seem like overkill at the moment, but, honestly, it has to be not seen to be believed. If you're at all tempted when it comes your way, do everything you can to resist the vague impulse if it ever arises. There’s nothing here for you.