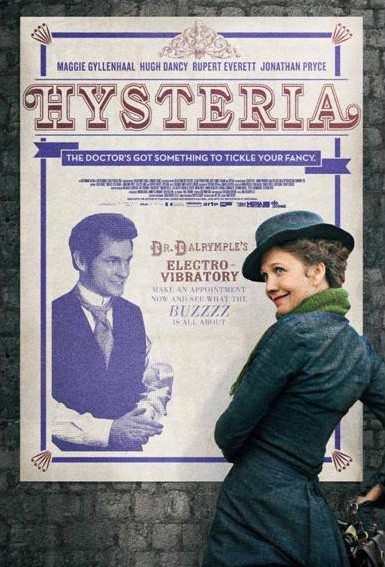 She's Hysterical! Get that Bedlamite an alienist

Look, I know it’s a period piece set in England in the 1880s, but don’t be disheartened. It doesn’t have Keira Knightley in it, I swear! It has Maggie Gyllenhaal instead!

For some that’s a plus, for others it’s even worse, but for me it’s preferable. Infinitely preferable. I still have nightmares about what Knightley did with her jaw in A Dangerous Method.

Brrrr. No, this is about something far less outlandish. This movie purports to be about the strange time in human history where men didn't believe women were capable of having orgasms or enjoying sex, and where everything women said or felt or experienced was labelled as 'hysteria'. If they were perfectly docile and never complained about their status as third-class citizens, then everything was fine. If they arked up and said, "Wow, this system is fucked and we are totally disenfranchised", then clearly they were hysterical and needed to have their uteruses ripped out.

"I don't want to spend my whole life popping out children."
- slap "Get this woman to a sanatorium, she's hysterical."
"I think women should have the right to vote, to an education and the right to keep the money they earn."
- gunshot "Whack a straitjacket on that woman, she's hysterical."
"I don't think doctors should have the right to incarcerate us and perform horrifying medical procedures on us without consent and without any sensible purpose."
- stab "This woman is hysterical. She needs to have her womb yanked out."

And no, it wasn't invented by the Japanese, proudly released upon an unsuspecting but grateful world by the Sanrio Hello Kitty! company.

What's the link, you're thinking, between hysteria and a girl's best friend? The profound idiots of the medical fraternity thought women suffering from hysteria, which was a catch-all for everything ever experienced by a woman from the beginning of time onwards, could be treated by manually 'medically' stimulating women to induce 'paroxysms'. Not orgasms, you know, that blessed thing women do that lights up the world, but involuntary convulsions which, afterwards, left the women somewhat drowsy, contented, and not complaining about their lot in life.

It's a bit hard to swallow. They really didn't think women experienced any pleasure through sex even after thousands of years of people, how shall I put this delicately, fucking like crazed weasels? I mean, I understand the terror men experience in contemplation of the divine feminine, which through their insecurity is transformed into the monstrous feminine, but the fear of women actually enjoying sex leads them to think that if they ever get to enjoy it, maybe they'll actively pursue it. With Someone Else! Who's Better At it Than Me! It's just that for me to accept that no-one realised women were capable of orgasm until 1880, well, it requires a certain amount of revision in my thinking about human history.

Look, I don't have to buy a lot of the premise, or a lot of what happens in this flick. Not for a moment do I accept that Hysteria is an accurate portrayal of whatever might have happened in 1880s London, even if the characters here share a few names in common with people who might have existed. What matters is whether the story is entertaining or not, and whether it shares at least a few moments of connection with actual Earth history blended together with all that fiction, and whether it has anything to say.

It is a funny story, in both the ha-ha sense and in the 'that's odd' sense. A young doctor (Hugh Dancy), fired from all his jobs because of his insistence on hand washing and not killing one's patients, eventually gets work with an elder of the profession (Jonathan Pryce) who provides a unique service to the ladies of the city with the money to pay. Believing the latest in psychomalogical theorising, which is a step down from voodoo, all of his patients are deemed to suffer from hysteria, manifesting itself as sadness, anger, happiness, dissatisfaction, insomnia, nymphomania, frigidity or boredom. You know, everything.

When we see the elder doctor 'treating' a patient, he basically sets the lady up on a table with legs akimbo, with a little courtesy curtain draped for decency's sake, then he oils his hand up and proceeds to dive in, so to speak. He's basically using his fingers to get them off, for which the ladies are extremely and financially grateful. They keep showing us shots of the doctor's appointment book overflowing with ink, and the always chockers waiting room, excited women waiting for their turn at this unique therapy.

The young doctor, with the unfortunate name of Mortimer, rolls his sleeves up and gets to work with gusto. Things couldn't be better, and the two doctors involved couldn't be, from our perspective, any more clueless about what they're doing. It's incomprehensible to me that the characters wouldn't know what's going on, but then we did rise up out of very ignorant times, especially as it related to women's bodies. The other problem I have with it is on the part of the ladies. However frowned upon certain behaviours might have been during the reign of that austere monarch Victoria, I find it hard to believe that none of them had ever had a fiddle themselves.

This isn't a fatal problem for the flick, because that oblivious ignorance is the source of much humour in its depiction. That well-meaning but callous doctors could 'stumble' upon the female orgasm like explorers deep in the jungles looking for coal and finding diamonds instead highlights the ridiculous times women lived through and endured for decades, centuries, millennia, but the tone of the flick is meant to get us to roll our eyes at the idiocy, rather than storm the barricades. It's meant to be funny. No shit.

Mortimer has a louche friend louchely played by Rupert Everett, who's probably the louchest actor in existence, who, being a bored aristocrat, needs hobbies to amuse himself with. This new fangled 'electricity' stuff affords him a power source for his inventions, one of which is meant to save poor Mortimer from the horrible hand strain he now bares upon his slender shoulders. What with all the constant therapeutic fiddling and such.

Poor Rupert doesn't look very well in this, but he's pretty funny all the same. Hugh Dancy, who has possibly the ponciest name in the history of ponciness, is wonderful as an idealistic doctor/goof who still has his eye on the prize of wealth and respectability. He is pulled in two directions, which is that he believes in progress and science, but is given enough incentives by his imperious (and totally selfish) employer, to ignore what he knows and continue living and working a lie.

Nothing and no-one in the world could prompt him into becoming a more compassionate, more enlightened person other than a woman, let's face it. They are, after all, the main point of the movie: the plight of women in a world that either doesn't have their best interests at heart, or, even worse, horribly misrepresents them.

And in whom is all these points embodied? In Charlotte (Maggie Gyllenhaal), of course, the senior doctor's suffragette daughter. Ye olde doctor has two daughters, one whom he likes, who's demure and pliant, and the other one, Charlotte. Charlotte of course is the one who ridicules what Dr Mortimer and his happy hands have been getting up to. She is the one who mocks the waste of his medical training, and his conception of female sexuality and the poverty most of London's women live in, who forces upon him through circumstance a stark choice: keep the sisterhood (and her) down by maintaining the idiotic status quo, or let them free, godsdamn it.

She is a more than passionate advocate for women's rights, reproductive, political, economic, and so she should be. Even if Gyllenhaal goes over the top in her portrayal, making it a bit more manic that it probably needed to be, it's the one role that needed to be that way, I guess. It's the one role in a British period piece you'd give to an American anyway.

She is the agitator that won't ask politely, who won't put her hand up and wait to be asked to speak, who won't wait at the back of the line for her turn. It's the women like Charlotte who demanded and fought for their rights, (she's meant to be in the mould of Emmeline Pankhurst and her daughters, or Emily Davison): women who forced social change, not the men who nobly 'granted' them these rights like they were giving them a tacky present for services rendered.

Even if this flick trades solely on Brit-Victorian Era-stereotypes, stiff up lips and labia and all that, it still manages to deliver a pretty funny story that isn't that educational (who wants that anyway) but is powerful all the same. The core of the story remains true, in that Dr Joseph Mortimer Granville did patent the first vibrator (which he called Granville's Hammer in 1883). So that bit's true. Not sure about any of the rest of it, though, but at least it gives us a strong idea of how far we've come even from an era in which those living in it thought they were enlightened enough as it was, thanks for asking.

It's also a reminder that there's still a long way to go since women in this current world are still having to argue about reproductive rights and the sovereignty of their own bodies. Battle's have been won and lost, but the war rages on.

It's a jolly superficial film, but an enjoyable one all the same.

--
“I’m sorry, your Majesty, you will have to purchase one just like everyone else.” – it's a brave man defies a Queen - Hysteria