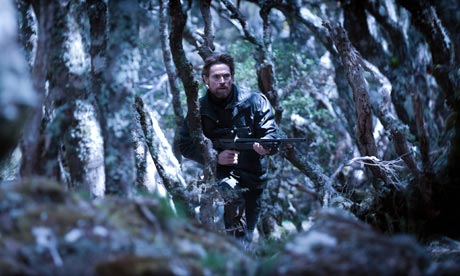 Support your local Greens candidate, or Willem will come after you

The Hunter is a sombre, icy film from last year that I didn’t get a chance to see in the cinemas at the time. It’s a pity on the one hand because I’m sure the sometimes harsh Tasmanian wilderness would have looked sublime up on the big screen.

Alternately, my perplexity at the ending and the point of it all would not have been lessened by the big screen experience.

A German biotech company called Red Leaf hires a man, a manly American man (Willem Dafoe) to go out into the Tasmanian wilderness in order to find the last remaining thylacine. As in, the Tasmanian Tiger which has been long thought extinct.

When he goes into town to try and find some other kind of accommodation, the locals are not helpful. In fact, they’re downright rude. The only work locally seems to be logging and serving beers at the pub. For some reason the salt-of-the-earth loggers and the surly publican assume Martin is some kind of pinko greenie who somehow, all on his own, is going to stop their livelihood dead in its tracks. It’s never, at any stage, explained how or why they think this one chap is going to stop the area’s only industry, but presumably because his task is secret, he never disabuses them of their foolish notions. Even though it would have been really, really easy whether he told the truth or lied wickedly.

He methodically sets out to capture an animal that probably doesn’t exist across a vast landscape using GPS, maps and, I dunno, occasional voodoo rituals. No, that’s not fair. He seems to be a very skilled outdoorsman, but it just seems odd that this is the plan. He has some coordinates, a general idea, and no moral compunctions about what he’s meant to be doing.

There’s something strangely 1970s about this flick, and I’m not sure I can explain why, though I’m obviously going to give it a bit of a bash. It’s somewhat distant, distancing and cold, though it’s not lacking in human elements. There is however a pervasive paranoia to the experience, which is to the film’s credit and a credit to Dafoe’s performance. He mostly acts like he doesn’t really have much time for humans, though that shifts partway through the flick.

He also seems to be following in the footsteps of another protagonist whom we never get to see. Maybe that’s why it felt like a bit of a throwback, because it reminded me a bit of flicks like Polanski’s Ghost Writer (yes, derr, I know it’s not a 70s flick) or even something like Bertolucci’s The Spider’s Stratagem. It’s where a protagonist is constantly being told how much they remind everyone of some other chap, that they’re following in their footsteps, and that they’re going to end up like The Other Chap if they’re don’t stop what they’re doing right this minute.

There are plenty of flicks like this, but this one does a good job generating the mood required. The awe-inspiring but forbidding scenery, and the uncomfortable, moody film score help tremendously as well.

All that atmosphere doesn't entirely help me with my problems with the story, however.

At the house at which he's staying, the two hippie kids, one a mute, start cozying up to him as if he's going to move in and replace their father, the man in whose footsteps he is following. Rightly, Martin is creeped out by the idea and tries to maintain his distance from them. He does have some feelings of basic decency though, and tries to help around the hovel in ways that don't directly benefit himself.

He's where some of my perplexity arises. The kids have a mum (Frances O'Connor), who is depressed and who virtually sleeps the days and nights away. A local helpful man called Jack (Sam Neill) keeps trying to 'help' the family out by keeping her medicated, and tries to help Martin out too, but obviously has his own agenda going on. What could that agenda be?

Hmm, that's a mystery. And really, who cares as to why he's pretending to be mysterious. We can guess that between the two sides, Industry Versus Environment, he's on the side of Industry, but Martin's not on either side, but his ultimate motive is for Industry anyway. And if Jack has qualms about Martin's activities mimicking those of Jarrah before him, and if these shmucks were responsible for Jarrah's disappearance, then why place Martin in Jarrah's home with Jarrah's family? It’s never explained why they thought Jarrah was such a risk to their plans to rape and pillage every tree in Tasmania, nor why Martin could under any best or worst case scenario do something similar.

The conflict, which Martin never takes a side in, seems like a manufactured one, especially since it seems like something completely separate from what Martin's trying to do. It makes as much sense if two gangs were in town, the Jets and the Sharks, and both distrusted Martin as he went on his way trying to find the last of an entire species.

You would think there would be something somewhat important about the possibility of finding a living thylacine. We don't entirely know why the evil company, the one we know is evil because they kill people for no reason least of all profit, wants with the thylacine, but it's clear from the start that it's not in order to put it in a zoo. Martin keeps getting pushed for a result, and keeps searching further and further afield, and we have no real reason to assume that it is there.

The thing is, though, for an evil company, none of their actions make any sense even for an evil company. Companies can be 'evil' in stories, but they can't really be idiotic. If we take it as a given that companies and cabals and conspiracies can do awful stuff for fun and profit, we can swallow it. It's harder to take when a company has a person commit bunches of crimes which amplify, rather than cover up, the crimes they've committed and intend to commit in future. 'They' didn't really make any sense.

Regardless of whether he's Ahab or not, whether the thylacine is Moby Dick or not, Martin's actions up to but not including the ending you can argue make some sense. His actions at the end make absolutely no sense. How he thinks his actions are going to prevent anything, save anyone, help anything is beyond me. It’s meant to be the best possible ending under the circumstances, but I’m not sure in what universe that could be true, or that we were meant to see it the way the makers intended.

I want to draw a clear distinction between an ending I don’t ‘like’ as opposed to an ending I don’t think works for the story it was telling. My not liking some aspect of a story doesn’t amount to a hill of bean-like objects in the scheme of things or the system of the world. My not liking something doesn’t mean it doesn’t work for a given story, or work for other people. I haven’t discussed this film with that many people, but the two with whom I have also similarly wondered how we were meant to care for that ending in the slightest. To me it’s as if you are looking at a table, upon which are these cards, upon which are scrawled the possible endings for this film. If you ordered them from ‘best and most meaningful’ to ‘least likely to mean anything to anyone’ and held onto that last card to the exclusion of all others, that’s what we’re left with.

We have to assume a lot of things, including that a character who hadn’t appeared to be an idiot until the end spontaneously erupted with idiot-like tendencies. We have to believe that a company capable of and happy to commit multiple murders to achieve their ends will, upon hearing some guy on the phone say some stuff, just take their bat and ball and go home. We have to believe that there was only one hope for them to get what they wanted, whereas there’s as much evidence to support the complete non-existence of the thing they wanted as there is to support the abundance of multiple others, in which case they wouldn’t stop doing what they’re doing.

Martin is a character, maybe not a well-rounded one, but we get a sense of some meaning, of some nobility that underpins his actions, even if he seems like he’d rather be completely away from humans (which is well-done in that it’s implied by his behaviour and his manner, rather than having him say it out loud). If this is true, then his actions at the end make even less sense in that light.

It’s a solid film, somewhat engaging even as it maintains its distance from us. A lot of it involves just watching Martin hiking around in increasingly inhospitable terrain, which I didn’t mind at all. Dafoe delivers a strong performance even if the script demands he take increasingly unlikely courses of action. Tasmania looks, as it should, like a place where humans don’t really rate that much of a mention. You could assume from the marketing for it or even from stuff I’ve mentioned in my review that this is a flick with an environmental or ecological/sustainability message, and that would be a mistake. It’s nothing of the sort, but what its ultimate message is, is somewhat lost on me unless it was just a generalised “corporations are evil people too” kind of statement, driven home in a manner that couldn’t have been less subtle if it had been delivered by Mitt Romney himself wearing magical underwear on his head.

--
“What you want you will never get.” – want for nothing and you’ll never be disappointed, then – The Hunter