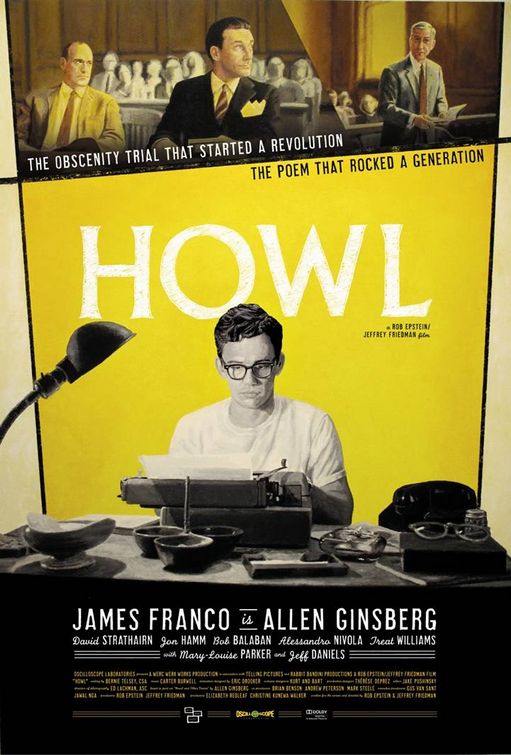 Wow – can you imagine, even for a second, anything as totally fucking thrilling as a movie about a poem? You can’t, your petty little mind can’t encompass anything as utterly mind-blowing as that without having an aneurysm, for sure.

So be warned, those of jaded palates and timid dispositions – here comes Howl to blow away your petty lives and sclerotic brains.

Yeah, well, maybe the fuck not.

A poem is just a poem, after all, and Howl, the movie, doesn’t even conform to the basic parameters of ‘movieness’ enough to imply that this is a movie about the life and times of Allen Ginsberg, Poet Laureate of the Beat Generation, and his writing of the epic poem Howl. What it is, is something more, and far less at the same time.

It’s far less, because James Franco plays Ginsberg in the 1950s as a fairly young man, basically giving a monologue about ‘his’ life and times before, during and slightly after the writing and performance of Howl. In between footage of himself reading the poem aloud to some lousy beatniks at some hovel of a beatnik club, he sits there talking about himself, mostly in black and white, but sometimes in colour. The colour bits where he sits there in his flannel shirt with a fake beard pasted on have the unfortunate effect of making it look like he’s playing George Lucas, instead of Ginsberg. You could hardly think of a worse fate for a man.

The ‘young’, vital bits are in black and white, since as we all know, the world, back in 1955 was monochromatic, awaiting the dawning of colour. He reads a bit, the lousy beatnik crowd nod their heads (they yell out ‘yeah’ instead of clapping or clicking their fingers), then he talks to the interviewer a bit, then they show an animated rendering of imagery from Howl, which verily bursts from the screen in its vividness.

There’s a plethora of animated cocks, for those who like that sort of thing, and who doesn’t?

The last element involves the recreation of a trial, an apparently important trial, involving the publication of Howl, and involving that most important brazen hussy of the US Constitution, being that adorably slutty First Amendment, and its protection of free speech. Ginsberg’s publisher Lawrence Ferlinghetti is up on obscenity charges, and the state and the defense (David Strathairn and Jon Hamm, yes, THE Don Draper, respectively) end up arguing about the literary merits or lack thereof of Howl as justification as to whether it’s obscene or not. If it’s deemed to be obscene, then its publication, presumably, isn’t protected under the Constitution, and Ferlinghetti can be punitively punished for his pusillanimousness.

What a pointless argument. Of course it’s obscene. Why shouldn’t it be?

I’m not going to pretend I’m some erudite aesthete or scholar with a deep and abiding love of poetry and a deep and abiding love for either Allen Ginsberg or Howl or the Beats themselves. What I can admit to is that I have read Howl a few times over the years, and that I was aware of its place in Beat history, but I can’t pretend I knew what was going on within the poem beyond some of the greater lines and more vivid images. My knowledge of the Beats arose primarily, like most of the great art we ever appreciate, through friendship. A dear friend of mine, for whatever reason, either really loved the whole Beat Generation thing, or deeply pretended to really love the whole Beat Generation thing. Either way, I got exposure to much of their writings, including the befores (those who influenced the Beats) the durings (their actual stuff) and the afters.

A lot of their stuff also turned up as spoken word stuff or ironic song pairings on the community radio I used to listen to during the resurgence of interest in the Beats that happened in the 90s, long after their relevance to anything had ended, and when at least half of them were dead.

So I have, at least, a passing familiarity with them, and with this. Still, it’s interesting to watch Generalissimo Franco play this role and tell Ginsberg’s story, limited as it is. I think he does a terrific job mostly in the parts where he’s reading the poem. I’m sure I’ve heard the recording that Franco mimics to deliver the ‘speech’ portion of the proceedings. Does his voice sound like Ginsberg’s? It doesn’t matter. So what if his voice isn’t Jewish enough. What he gets right is the joyful parts, the sorrowful parts, the hectoring, nagging, accusatory parts, and the ejaculatory ones as well.

The scenes dealing with the trial, while well acted, essentially come across as a re-enactment, along the lines of crime re-enactments you might see about some moron at a train station attacking some poor honest hard-working member of the public for no good reason. As much as I love any reason to see Jon Hamm do what things Jon Hamm does so well, which is, ultimately, being Jon Hamm, these sequences don’t really add that much to the movie.

I’ll tell you why for free – there’s an actor playing Ferlinghetti the publisher. The actor sits there the whole time, never saying a goddamn word. That’s not acting, that’s being furniture. The ‘real’ acting gets done by people who could not possibly have gotten paid what their time is worth playing strange roles defending or decrying the literary worthiness of Howl.

Mary Louise Parker has the most inexplicable cameo wearing delightful pince nez glasses and shuddering in horror at the thought of some of the words used by Ginsberg. Jeff Daniels plays a professorial type (again, after having played the monstrously conceited academic role to perfection in Squid and the Whale), basically writing off any worth to Howl, and lamentably depicting himself as an expert witness on literature.

Sure, it’s absurd. We’re supposed to look back on the shenanigans of 1957 and think, ‘boy, people get away with all sorts of filth these days’, and, also, to view Ginsberg as some kind of Larry Flint character. He’s A Man who ends up being crucified for the sins of speaking out, speaking honestly, speaking truth to power.

Well, that’s not an argument I can get behind. I guess if the poem was more important to me, I would argue that it was a shot across the bow of stodgy correctness, a storming of the literary ramparts that would pave the way for countless others desperately wanting to invade our minds with their filth. But the thing is, as great as the poem might be, did it really change the world, or change poetry, and would that be a good thing?

Maybe he did, but this flick isn’t in the business of convincing us of that fact. Maybe he did pave some part of the way, and it’s especially important that there was very much an overtly gay text to the poem and debate (as opposed to subtext). Sure, he’s not the first gay writer to commit pen to paper or finger to typewriter key, but there was something to the overall argument, and, clearly, the court case, that had to do with the choice of language, and representation of hot man-on-man action.

So, yeah, I guess he’s an American hero. Because this takes the form of a pseudo-documentary, instead of an actual documentary, and avoids the biopic format by simply having recreations and Franco – Ginsberg talking endlessly about his life instead of Franco – Ginsberg endlessly acting out scenes from Ginsberg’s life apart from the reading of the poem, it avoids the pitfalls of most docos and biopics. It creates all sorts of new pitfalls for itself to fall into.

The animation is interesting. It’s not great, it’s not as illuminating as Ginsberg talking about experiences in his life, the men in his life and what they meant to him and, most importantly, how that manifested itself in Howl, but it’s still a decent break from the talking head stuff and the poetry reading.

The most interesting element, for me, which is delivered via Franco talking to the pseudo-interviewer, is about his belief that there needed to be, for him, the shortest distance possible between himself as the writer and what he was writing. He speaks at revealing length as to the manner in which other writers could contrive to ‘speak’ through their writing in ways and about ideas and experiences that has nothing to do with who they were as people, and what their lives were like, and that this held no appeal to him, because he felt it dishonest/inauthentic.

Frankly, Mr Shankly, I found this limited, niche, narrow fillip of a flick interesting for these and many other reasons. I can’t imagine this flick would be at all interesting to 99 per cent or more of the world’s population, and someone who’s never heard of the Beats, or Ginsberg, or Howl, would think this was the most pointless and insubstantial flick in human and bacterial history. I couldn’t argue with them. This is, though, something incredibly highbrow and accessible at the same time, though it’s not going to change anyone’s mind about anything.

It’s not stunning, it’s not mind-blowing, it’s not the end or the beginning of the world, but it’s, you know, a screaming howl of despair into the firmament, of joy and of rage, and, you know, it’s got a place in the cinematic world, for sure.

--
I saw the best minds of my generation destroyed by madness, starving hysterical naked,
dragging themselves through the negro streets at dawn looking for an angry fix,
Angel-headed hipsters burning for the ancient heavenly connection
to the starry dynamo in the machinery of night - Howl