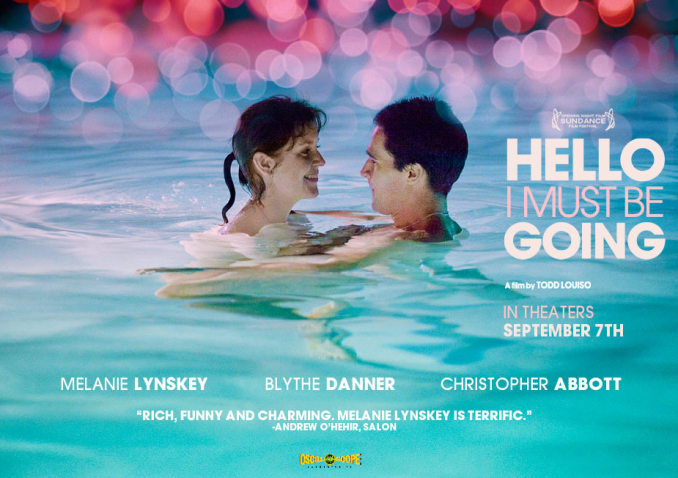 Here, in this film we have before us, where not much of anything happens, it’s probably not the perfect opportunity to bust out and declare to the world “I’M HERE, BITCHES, AND I’M READY TO OWN”, because her character is pretty depressed and the story is so low-key and low stakes. Nonetheless very enjoyable, entirely because of her performance and because of the way the story serves her character.

Amy (Lynskey) lolls about at her wealthy parent’s house. She seems pretty down in the dumps. People keep ragging on her about this t-shirt she is always wearing. It’s a nice red t-shirt. It’s not even dirty or torn up. It’s fine. Stop bitching about the t-shirt, for crying out loud. Leave the t-shirt alone, you want to yell at the screen.

But they don’t let up about the t-shirt. It’s emblematic, you see. Amy’s perpetual wearing of it, and her reluctance to leave the house indicate that she’s upset about something.

What is it that perturbs her so, you have every right to ask. Well, I’ll tell you. Until recently, she was happily married to some shitty guy, and now that guy wants a divorce. All she’s known is this man, and now, in her mid-thirties, as if it’s her nineties, she has to figure out what to do with her life.

See, like many people who somehow get to believe the Great Lie, she believed that getting married and setting up house would somehow be the end of things. She wouldn’t have to think about a fulfilling career either financial or emotionally/intellectually, or seeking out the stuff in life that she wanted or needed, because her entire raison d’etre would be Looking After Her Husband.

Funny how that turns out for people, who aren’t told as well that it’s not an ending of having to question and search and strive, but the beginning. Now everyone around her, all her emotionally manipulative family, get to lord it over her and perpetually give her advice to fix her up and get her out of her funk.

The stigma against psychiatry that may have existed in times of yore is completely gone, at least as far as this flick is concerned. Amy has multiple people, including her mother, telling her constantly that the solution to all her problems will definitely be anti-depressants. The cure-all, the panacea, the magic bullet that makes everyone around Amy feel better about themselves, which completely ignores what Amy’s issues really are.

This might sound like a mope-fest, but it’s not, because really it’s about a person finding love with someone much younger than themselves as a means to an end (that end being realising what a toxic relationship you have with your family and former spouse), not as an end in itself. The idea that perfect romantic love with someone, anyone, is the cure-all (instead of anti-depressants) to all of life’s ills is a pathetic and damaging lie perpetuated by countless films that might seem like this one. But this flick doesn’t pander either to some misguided notion of what an audience should want. It’s a character study about a person who needs to, and eventually wants to, dig herself out of a hole she’s allowed herself to be put in.

Blythe Danner, who’s a wonderful actress of a certain age, unfortunately is best known for being Gwyneth Paltrow’s mum, despite having a career that stretches back into the earliest days of cinema. She plays an exasperating mother figure here to Amy. Her perpetual comments about Amy’s weight, present and former, and how she’s a fuck up that’s messed up everything in her own life and in her mother’s, delivers none of this material with venom. She says these things with in a casual but not cruel manner, because that would make her a villain, and not just a self-involved middle-aged mother, which is something we can relate to moreso.

Like many parents, like mothers and fathers the world over, she thinks telling you about some mistake you made twenty years ago, as if you’d forgotten about it, will somehow inspire you to permanently change some aspect of your life, thanks Mom. Or that keeping up a casual chatter of criticism in the background and foreground of every conversation had in your proximity could actually help in some way, like blaming you for the infidelity of your partner, that it’s a good thing, thanks Mom.

She, too, is searching for meaning in her life, but she thinks blaming Amy for the lack of love and intimacy in her own marriage will somehow make her feel better about herself. The truth is their model for love is somewhat defective: the mother because she’s seeking love, affirmation from and time with a man who’s utterly oblivious of those needs, and the daughter because her model for what a man in a relationship should be like is an uncommunicative, inarticulate, emotionally-withholding jerk.

But then Jeremy (Christopher Abbot) comes along, without even a suitcase or a song, and she can’t believe that such a guy can exist. He’s not some fantasy object or idealised version of a guy, because he’s got his own issues, especially with his own mother. But she can almost not believe that a guy can just really like her and desire her, in equal measure, because she’s been used to a lifetime without it.

Thing is, though, he’s 19. Yes, yes, we know from countless Woody Allen, French and Italian films that a man up to or beyond his 60s banging a woman barely out of her teens is the absolute pinnacle of human achievement and the greatest possible thing in human history. There couldn’t possibly be anything wrong with that. And yet somehow the prospect of a woman in her mid-thirties with a nineteen year old guy who’s very mature for his age, for whom she’s very immature for her age, is something that must be hidden from the eyes of the world. Thus they slink around in secret, lest they be discovered and the world fall apart around them somehow.

Needless to say, even when people get what they think they want, they can have oodles of in-built programming that compels them to either reject it or completely fuck it up, knowing they’re going to regret it even as they doing it. As I said before, though, this isn’t about ends or destinations. It’s about Amy realising some stuff about herself, accepting the love she doesn’t think she deserves, and seeing her life and herself for what they are, rather than what they should be for other people.

I really enjoyed this, and I thought Melanie Lynskey’s subdued performance throughout was superb. Christopher Abbot as the main actor she bounces off also does really well with a part that could have been overdone. He strikes the perfect balance between eomtional openness and righteous naivety. He’s never wise beyond his years: he’s just not had his soul strangled by self-involvement and bitterness yet, unlike the rest of us. Their scenes together are sweet, very sweet.

Is it a fantasy? Is it like a low-budget version of any of those transformative movies aimed at women where a woman, strangely enough, discovers that all she has to do to be happy is to travel through India, eat food in Tuscany and fuck Antonio Banderas. If only we all had those options. I’m wary of transformative narratives, because they’re just as much of a myth as anything else. I think this film does it right. It gives modest hope that some aspects of our lives don’t have to be set in stone, and that’s change I can sort of believe in.