He Died With a Felafel in His Hand 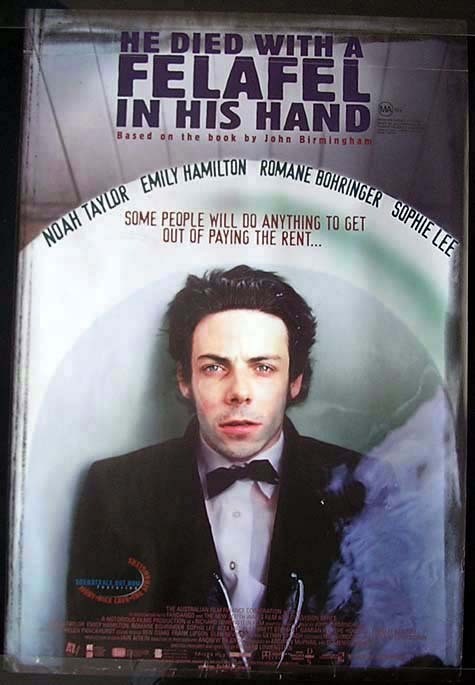 It just struck me, falafel is the tasty chick pea mix, did they actually
mean 'kebab', as in, a falafel kebab in his hand? Because...no, it
doesn't make much of a difference I guess

I always intended to write a review that started thusly, and now I’ve finally achieved that lofty ambition. I am a simple man, after all, with simple tastes and simpler pleasures. It doesn’t take much to amuse me, but it takes much to maintain my interest for more than a few minutes at a time.

He Died With a Felafel in his Hand is one of those classic books, like Trainspotting, like the Bible, that’s more of a collection of stories than a story with a single protagonist and a clear narrative, which, in the hands of cinema geniuses, is transformed into a story with a protagonist and a clear narrative. The book, by John Birmingham, is a funny collection of the kinds of nightmare Australian sharehouse experiences which should (but probably won’t) close the book on writing about such stuff for future generations.

The film takes some of the material and transforms it into a story about an aimless young chap called Danny (Noah Taylor), who lives in a number of sharehouses, and has a bunch of hangers-on and ridiculous experiences. The story starts in Queensland, moves to Melbourne, then finishes in Sydney.

One of the opening scenes is of someone taking a swing at a cane toad with a golf club. With the sound of the impact, and then the splat, we pretty much know this flick is going to try desperately hard to be ‘out there’.

The other part of the opening is a scene where someone sits with a felafel held rigidly in their hand, presumably dead whilst watching the ABC program Rage. Golden Brown by The Stranglers blares at top volume as Danny loudly asks him to turn the volume down, before realising that the felafel-clasper is dead.

The story then jumps back several months to Queensland, and the protagonist’s 47th share house. Housemates argue about the latent homosexuality in Reservoir Dogs in between bucket bongs. New potential housemates turn up out of the blue to take up residence in cupboards. Menacing debt collectors menace the residents over the non-payment of rent. One housemate is a giant bean bag of a man, who spends all his time sitting in a bean bag sternly operating the remote control to the television. Another lives in a tent in the lounge room, whilst another seems to be trapped mentally in Apocalypse Now. Danny’s friend Sammy (Emily Hamilton) seems like the only sane person in the entire house, but that’s only because she has glasses on and reads a textbook most of the time.

A new housemate, Anya (Romane Bohringer) comes into the mix as a chaos agent, seducing and rejecting people, including Danny, at seeming random with no further purpose than to make things interesting. The Queensland story culminates in a goth-infested pagan sacrifice on the winter solstice invaded by a gang of skinheads who set about destroying the house whilst singing the Nazi anthem Tomorrow Belongs To Me from Cabaret

The story shifts to dreary, rainy Melbourne where Danny has presumably fled to avoid creditors, to avoid most of the people he used to live with, and to avoid, as he does for the entirety of the flick, thinking an original thought or doing anything of any significance.

Now’s probably as good a time as any to point out that Danny is an excruciating parody of a human being, and that the entire flick is so incredibly pretentious and precious that it is no wonder fans of the book were baying for Lowenstein’s blood when the movie first came out. Much of the flick transpires in this aura of heightened reality that you would usually find in the film experiments in formalism of shmucks like Hal Hartley or Whit Stillman. Further on from there, if you can’t be bothered looking up what I mean by formalism, is what is probably the Ingmar Bergman-esque technique of having a bunch of people in a space who aren’t actually engaging in dialogue, but are saying their own thing seemingly at random one after the other or at the same time.

It can be interesting, and amusing, depending on your personality, or it can be infuriating. I have watched Felafel a few times now, the first time on the big screen, and I have to say that I think it’s an impressive Australian film with practically no audience and no chance of connecting with viewers except in a strange pop cultural melange of sequence and concept. It’s funny, but in an arch way where irony defines and undermines everything.

I guess Noah Taylor does a good job as the protagonist, who is a pretentious little shit who dresses like the typical threadbare aesthete who would plaster pictures of French actors and intellectuals on his walls and tell people he’s a writer despite writing nothing. He randomly asks women to marry him, and lives a life so aimless as to almost be envied. Untethered by any reality, he can afford to be as strange and indulgent as the flick requires. He has a decent rapport with his friend Sammy, and they interact well, probably better than with anyone else in the flick.

He’s also friends with Flip (Brett Stewart), who we know is the Hand clasping the Felafel, and they have some suitably loopy conversations about the nature of reality and the virtues of girls in tight cashmere sweaters. Flip is less a character than a stock type, but he’s well acted enough to be more than just the basic stoner loser these flicks require.

The real gem for me is the character of Taylor (Alex Menglet), who starts off as some kind of lunatic but mellows out over time. In Melbourne, he comes to a profound epiphany on the intersection between romance and finance, and, in his own words, ends up having the best fucking night of his life.

The last act moves to Sydney, where the house is whiter and brighter, but no less populated with lunatics. Danny seems to be heading towards a crisis point of some description, as everyone and their dog tracks him down yet again. Noah Taylor’s big moment, worthy of an Al Pacino freakout, as he screams into the face of an annoying housemate, is a classic moment in cinema history.

I remember hearing John Birmingham interviewed back in the day when the film came out as he talked about the process he and Richard Lowenstein went through with the script. Birmingham said that his sense of humour tended more towards fart jokes and Benny Hill gags, whereas Lowenstein tended more towards arch Woody Allen and Hal Hartley intellectual and woodenly-acted jolly japery. The combination of the two makes for an uneasy blend, although now I wonder how much of the Benny Hill stuff really is there. There is a level of abject absurdity, and very little humour deriving from the characters themselves. Absurd stuff happens, even more absurd stuff is said, but it just seems to happen to people, rather than be caused or created by them. A scene where Danny tells a police officer that his name is Fyodor Dostoevsky is played for a kind of laugh, but I’m not sure who would have found it funny. The running gag regarding a Penthouse letter is played more for an absurd (and unbelievable) deus ex machina than for anything funny. It's an experience way too French for its own good.

Lowenstein’s greatest achievement to date was the Australian classic Dogs in Space. Dogs in Space featured two really relevant elements to the current discussion: it focuses on the doings transpiring at an anarchic sharehouse, and it starred a young Michael Hutchence as the lead drug abusing rock star. Felafel is actually dedicated to close friend Michael, as we can see in the end credits, who committed suicide in 1997. But the really relevant part is that Lowenstein already covered sharehouse craziness back in the day. Making another flick about it seemed like a one-trick pony repeating its one trick for the audience who saw it the first time and remains slightly nonplussed.

I can’t say whether Felafel works, especially since watching it sober and alone makes it seem like a cold, calculated experience, but I do enjoy it on some level. I do find it funny, but not really in the guffawing out loud sense. It’s an interesting and well put together experiment. The soundtrack is excellent, the performances are decent (for something that contains only types and not characters), the sardonic sense of humour permeates everything and the transformation of the main character (limited as it is) as the film progresses, as well as the changes in Australian society represented through the progression through the cities/sharehouses is an interesting and welcome variation for an Australian film.

But I’d still recommend it to no-one.

--
“Let's just get this straight. You're 20-something years old, you have no job, no money, very few prospects. You haven't been seen in the vicinity of anything which even faintly resembles a member of the opposite sex in over 6 months. And yet you sit here and tell us that you have some kind of special thing that makes the other side go gaga. Well if it makes them go so fucking gaga what the fuck are you doing here with us losers?” – He Died With a Felafel in His Hand.