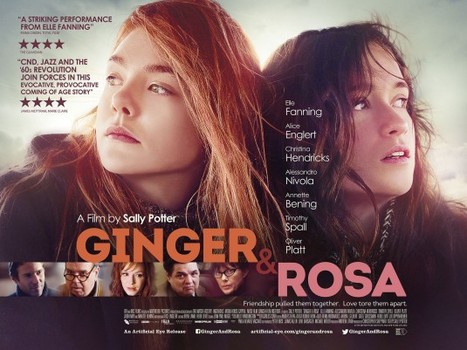 The key is: don't turn out like Linsday Lohan or
Kristen Stewart, girls

I have loved Sally Potter for a long time, all because of Orlando, from so long ago that it barely warrants repeating.

No, that's not a prelude to me spending most of this review talking about a different film, something I often do. Most of her other films since then haven't really impacted upon me to any level similar to what I got from Orlando, a level of connection that haunts me to this day.

Ginger and Rosa is no different, in that it didn't really dazzle me or resonate deeply with me, but it's still a decent film. It's very modest in its scope, somewhat lacking in ambition, but that gives it plenty of opportunity to focus entirely upon one character almost to the exclusion of all others. It's also another opportunity for Elle Fanning to show what an accomplished actress she is at such a young age.

Two mothers give birth in a London delivery room. They clasp hands without knowing the other, needing the comfort of someone else going through something transformative. They forge a link, and their born daughters are linked too, closer than sisters and bonded beyond reason. Yeah, they're the one's in the title.

Ginger (Elle Fanning) has bright red hair like her mother Natalie (Christina Hendricks), and the same anaemic super-pale skin. Rosa (Alice Englert) is pale but dark-haired, and from a Russian background. They're not twins, or spiritual twins or anything, despite their tendency to wear the same clothing and go everywhere together. They're enmeshed, though. You get this feeling of gestalt, of two people so intertwined that they don't always know where one starts and the other ends. This rarely ends up being a healthy thing in movies. Usually ends up with someone's mum being murdered with a brick.

In truth, though, even though they're inseparable, they're very different people. They're still girls, let's not forget that. I think, for the majority of the flick, they're only about 15 or so. Their forays into smoking and booze and boys are worrying in that way that of course it's worrying as an adult to see that stuff, but as a kid you'd remember that it's exciting, damaging times to remember. Rosa searching for something by 'acting' so grown-up, but Ginger's just going along with it because she doesn't want to look like a piker in Rosa's eyes.

The main difference between them is that Rosa has abandonment issues, never having known her father, and perpetually resenting her mother for still being around and caring about her. She doesn't realise that her dad was Stalin, and she should be grateful that they were long out of his clutches. Ginger's parents don't have a perfect household, but at least she's got a father, who demands that he not be called a father. Roland (Alessandro Nivola) is an intellectual, which immediately makes alarm bells ring. The way Rosa looks at him rings even more alarm bells, but let's not count the statutory chickens before they've hatched.

Roland was jailed at some time for being a conscientious objector to the war, and writes about freedom and such, and we should probably really listen to him when he's talking about that stuff. He is also, either because of his experiences or because of inclination, unsuited or unwilling to cope with the facade of happy families and bourgeoisie complacency. In short, he's a selfish prick who likes using intellectual arguments and philosophical entreaties to justify acting like a selfish prick to all and sundry.

Of course Ginger and Rosa are too young to understand this just yet. He just seems like the really cool dad everyone wished they had, who's never acting like an authoritarian bring-down, who's never telling you to do your homework or eat your greens, who doesn't care if you come home at 2am despite being 15.

The tension between Ginger's mother and father is too much, and threatens to completely fall apart when the mother correctly points out that it's kinda not cool for Roland to be sleeping around with his students. I assume he's at a uni somewhere, but it's hard to know exactly. Ginger's world, being her family, threatens to tear apart.

This is all happening at the same time in the early 1960s where a lot of people start getting pretty tense about the prospect of nuclear war. Ginger's convinced the world could explode at any moment. If you think the whole world could be reduced to a cinder at a moment's notice, wouldn't you want to believe that there's something you could do about it, no matter how feeble it might seem? Both Ginger and Rosa go along to CND meetings (I assume they were the CND meetings, they being the main protest group for nuclear disarmament that I can remember hearing about), but Rosa's just there for the guys, c'mon, admit it. Ginger's not averse to the idea of guys, but she's genuinely trying to stop the world from exploding or imploding. She's hoping she can really do something to save everyone.

It's the kind of thing you regret, but it would have seemed like a perfect strategy at the time. When her parents separate, Ginger somehow believes that moving in with her bohemian shit heel of a father is a good idea, but that's because she doesn't know how desperately she's trying to "save" a world that doesn't want to be saved, and inadvertently, she enables a situation with far more devastating consequences.

"Enables" isn't fair, it's totally not her fault, but it's because of Roland that Rosa now has something to compete with her over, and compete she does, in ways Ginger can't match (thankfully, dear gods thankfully). Neither of the girls can see, in the way that human history seems to be an endless repetition of women being unable to see how truly unworthy of their obsessions the shittiest men are, but that's almost immaterial here anyway. Ginger loves her dad, loves her mum, loves Rosa, but Roland, if he loves anything, loves only himself.

You couldn't imagine that I was somehow going to connect Roland's self-adoration with the Cuban Missile Crisis, but here it is: Rosa is the Soviet Union, Roland is America, and Ginger is Cuba. No, that's not quite right. Roland is Cuba, Ginger is the rest of the world and Rosa is the US, threatening to turn the world into a wasteland if it doesn't get its petty way. Either way, Roland's narcissism, like Castro's, and Rosa's obssession with getting her petty way, like Nikita Kruschev's, brings their world to the brink of destruction. Their world, because it feels a lot like an autobiographical story, is Ginger, and we don't want to see this sweet girl torn apart at all.

It's pretty much a Ginger-fest throughout. She's so expressive, emphatic and tentative, and the story is completely from her perspective. Rosa, apart from the hunger in her eyes for the approval of men, remains opaque to us beyond that. Roland, too, we judge harshly from his words and actions, but he too, remains opaque to us. Ginger has some family friends, thankfully, and they don't remain opaque at all, being a loving gay couple called Mark 1 and Mark 2, kinda like the Bananas in Pajamas (Timothy Spall and Oliver Platt), but they can only help so far. I think the flick wisely takes the approach in its script that this is a story told not from the perspective of Ginger as an adult looking back, imposing nuance and meaning that she only grasped later onto past events, but as Ginger as she was living it at the time, with no greater access to the hearts and minds and motivations of others than 'she' (being Sally Potter) had at the time.

Elle Fanning, who's American, does a flawless Brit accent. Other people in the flick? Not so much. Christina Hendricks, most famous for her role in Mad Men as Joan Holloway, does a terrible accent and is very distracting throughout, in that she doesn't really fit into the movie at all. Someone had to play the hard-done-by mum, I guess, but surely someone else could have? Surely there are some tremendous redheads in Britain that could have taken the role? Alice Englert as Rosa is not someone I knew prior to this, but it turns out she’s Jane Campion’s daughter, and she has a certain Twilight-esque look to her, so I’m sure she’s going to get a lot of work over the next few years. She’s probably good but this flick didn’t give her much of an opportunity.

Ginger and Rosa is probably a flick that most people will skip, and I can’t really argue that the world en masse desperately needs to go see it, but I enjoyed it for what it is. Potter elects to tell the story in a straightforward, kitchen-sink manner which helps the material, and helps tell the simple but devastating (to Ginger) story. It makes a change from a lot of big budget stuff I’ve been watching lately, but it also means it has a harder time getting a grip on the inside of my skull.

7 reasons why redheads should rule the world out of 10

--
“This is the way the world ends, not with a bang, but with a whimper” – I think that’s from something else pretty famous, but it’s probably the perfect line when you’re trapped on your nasty father’s yacht – Ginger and Rosa