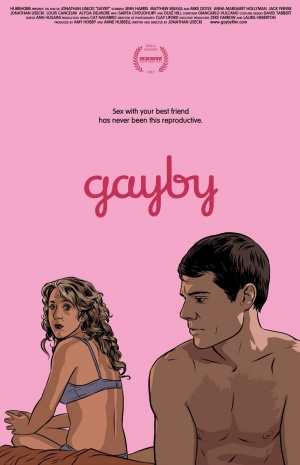 It was either this or The Hobbit, and I didn’t really want to review The Hobbit, so, here goes.

I know this sounds like a parody of a movie, like a joke trailer within a Tropic Thunder-like satire which would inevitably star Jack Black as the giant Gayby, but Gayby is a real film, in the sense that it’s not a joke and that it has actors in it, and it runs for nearly an hour and a half, the length God always intended all films to run.

Gayby covers the babymaking misadventures of a bunch of people, but mostly those of straight Jenn (Jenn Harris) and her best friend Matt (Matthew Wilkas) who happens to be gay. The adventure they want to go on involves the creation and raising of a baby, hence the portmanteau title of Gay + Baby = Gayby. How they know the baby is going to be gay is never explained, but I’m sure it’s not really relevant.

Mostly the flick, which trades on the apparently very real phenomena of lots of gay people trading their various bits of DNA, with or without turkey basters, in order to help each other have lots and lots of babies in Brooklyn, and probably lots of other places, is about whether Jenn and Matt will stay friends. That’s really what’s at stake, because the baby is kind of the participant’s award everyone gets just for competing.

Friends since college, they overcome the natural difficulty that a gay man and any woman, hetero or otherwise, would generally encounter attempting to engender new life together; not with alcohol, not with hypnosis, but just with some self-administered hand cranking. It’s awkward, but not horribly awkward, not painfully awkward. It’s as awkward as you’d imagine it would be, and I guess there's humour in that.

It combines a certain (low) level of believability, with an almost charming amateurishness, with stuff that you accept isn’t realistic but is there for the sake of having some kind of sitcom-like plot to keep things moving along in a familiar-enough fashion. These people 'date' with an almost disturbing frequency, and by "these people" I mean the main characters, and by 'date' I mean they go out with people they don't know in the hope of having sex nightly with someone different.

Now, I'm no prude, and I fully realise it's the same dynamic by which any character on any sitcom dates thousands of people over the course of a show's life because the people making the show want there to be something new and someone new almost every week. It just seems strange in a film where the two main characters are trying to grace the world with their progeny that they'd also 'dating' almost every night, and having sex with whoever turns up on the off chance that they have half an hour to spare in their busy schedules.

Maybe I just don't get the whole dating thing, since I'm an Australian, and it always seems weird to use the word 'date' in anything other than an American context. Then again I've been out of the dating market for so long that maybe the way the entirety of society works has passed me by as I sit on a porch drinking mojitos and polishing a shotgun waiting for the End Times or the zombie apocalypse, whichever comes first. What really matters, at least to me, is that it felt like the people who made this film were using elements of their lives - elements that perhaps would come as a surprise to people not in that community - and yet managed to make it seem pretty artificial and incredible.

'Incredible' as in, not having credibility. Jenn and Matt seem like they could be real people, and they're sweetly acted, but the modest hoops they're put through, the kinds which seem like they were cut out of the script from a lesser Jennifer Aniston / Jason Bateman rom com (if such a thing is possible), make them seem less real. It also doesn't feel like there much at stake for either of them. Sure, they have the highs and lows that most couples have trying to have a baby, but the 'baby' is a maguffin, an illusory brass ring the film pretends is the ultimate goal.

In truth, the film's only source of tension is whether Jenn and Matt will still be friends at the end of their efforts to breed. It makes a refreshing change from the usual crap about whether two characters will end up 'together' at the end of a film, but it's not really enough to hang one's hat on. The stakes are so low it's possibly stakesless, which means the only real interest is in the community of people the film puts forward.

Jenn seems to be entirely surrounded by gay men, who are the entirety of her social and work circles, and yet even her nasty-seeming sister never has the indecency to call her a fag hag. Possibly, this makes the course of action she takes make more sense. She's good friends with Matt, and he's really very fit, so there couldn't possibly be a better person to breed with, since she's not currently in a relationship, or really even interested in one, as is her prerogative. But then that raises the question about whether this flick is about the idea of single women tired of putting up with shitty men opting out of the relationship rat race and getting a kid by any means necessary, or whether it's more about the phenomena of members of the LGBT community getting it together and creating their own alternatives to the 'family values' structures conservatives/godbotherers/fundamentalists wank on about all the time.

To them, this flick would look like a calculated affront and like the 'argument's' own worst enemy. They would see the superficiality of some of the character's lives and point to the gayness of the characters or their comfort with it as the source of all their misery. They would have no point, they would be completely and utterly wrong about it, including their disgust at the fact that gay men and women have figured out how to game the system in order to fulfil/torment their lives with children just like the rest of us, but they'd be right only about how shallow Jenn comes across.

Matt comes out of it okay, since he seemed like he had an interior life and feelings and such and a desire to have meaningful relationships with the guy of his dreams blah blah, but Jenn? I never had any idea why she wanted a child in the first place. Or in the last place. It never seemed like something she even wanted, no matter what crazy steps she took to achieve it.

Maybe that was deliberate. The array of variation and overacting amongst the gay male characters, covering and even commenting on the various cliques and categories, for lack of a better term, made it look like poor straight Jenn was dullsville in comparison. No, I don't think it's a recruitment film, but it's certainly aimed at an aware audience, maybe something of a niche audience.

Gayby, despite the terrible title, is a slight but enjoyable enough flick, pretty forgettable and not really uproarious at all, so it shouldn't be confused with an actual comedy. The funniest bits are probably the bitchy catfights between two of Matt's friends about how closely they're adhering to the stereotypes of gayness or not, and maybe Jenn's adventures on Horny Goat Weed. But it does, for me, capture an interesting moment in Western society, where even though arguments persist as to whether full civil rights should be extended to gays and lesbians and variations thereof, as if there's time for that "Man in the Sky Says No!" bullshit anymore, it means that there are human stories arising from these 'new' arrangements that are worth our time and interest.

--
"I don't even have a turkey baster" - and here I thought they weren't going to go with the lamest, creakiest of jokes - Gayby