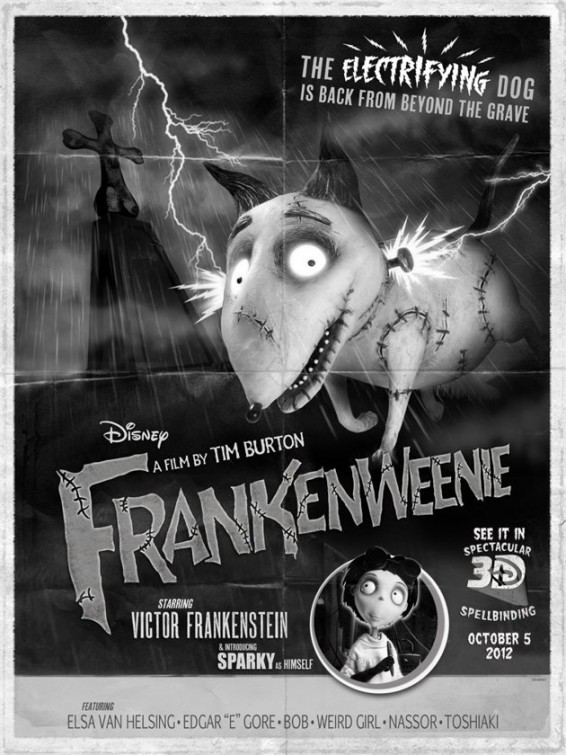 See a 3D movie, in Black and White! Also, it's a silent movie!
And you get war ration stamps and polio from watching it!

I admitted, in my recent review of ParaNorman, that I often make mistakes when it comes to allowing my darling daughter to watch stuff that’s perhaps inappropriate for her age, which was, at the time, five. What I neglected to mention is that I’m really not the kind of person you look to for the actual, mature process of ‘learning from one’s mistakes.”

That’s not something apparently that I do. So when my daughter, primed by having seen ads for it, insisted we go see Frankenweenie, I said “why the hell not?”

In the end, it turned out to be far less terrifying than I feared, and better than I expected.

It is, after all, a story about a boy and his dog.

Well, actually, it’s about remaking the ‘original’ James Whale Frankenstein in the most kid friendly manner possible, while also finding time to coat the whole story in the visuals and tropes Burton has been trading on for decades, as well as doing some stuff with the old Japanese monster movies.

And by ‘tropes” I mean the aesthetics and imagery he’s ripped off from people like Charles Addams and Edward Gorey from day dot.

This isn’t a brilliant movie by any estimation, but I loved the hell out of it. It didn’t tell a particularly original story (how could it), but it tells it aesthetically in the best manner possible for what the story requires, which is all we can hope for.

Victor loves his dog Sparky. Victor, Victor Frankenstein, that is, lives in the gloomy town called New Holland. No, it’s not Australia up until the 1800s. It’s gloomy because everything seems to be in black and white. Also, in a first for the protagonist of a movie Burton directed, Victor is a depressed loner, always going about in a funk.

The father here, like the father in ParaNorman, laments that his son isn’t a joiner, or a sporty type, or exactly the kind of son he wishes he could have had. Is every cinematic father like this? Now that I think about it, cinematic fathers from The Jazz Singer to Brave to How to Train Your Dragon to Texas Chain Saw Massacre all wish their kids could have turned out somewhat differently, before either accepting them as they are or killing them in the end. It’s tough love, but it’s the only way they’ll learn.

Any of the story dynamics, the parental discomfort with their son’s pursuits or lonerism pale into the background because, after all, it’s about a boy and the dog he loves.

A forbidding science teacher, voice by Martin Landau, who ends up being something of a sweetheart, gives Victor a taste of science as a grand adventure, especially the use of electricity to do dangerous, unholy things. And when fate separates him from the creature he loves most, he takes matters into his own hands.

Of course he recreates the experiment from the first Frankenstein film. The dials, the pulleys, the lightning! Does he get to yell "It's alive!" I won't spoil that for you, but it's imagery we've seen before over the last, I dunno, 80 years of cinema.

There aren't strange (other) things happening in the town (yet), but there's a strange spirit of ignorance in the air, as if people are feeling like they should riot before they're even given a reason to. There's no other explanation for it, other than the American propensity for rioting and mob violence even before a hat's been dropped.

Victor's experiment, which brings him back his pet chum (who has a lot of personality for an undead dog), comes to the attention of a hunchback type, who is not called Igor, but Edgar. There's no explanation as to why all the denizens of the town, all of whom are ostensibly regular humans, look so freaky (there's the hunchback, a Boris Karloff-type, a mayor who looks like a more malevolent Sydney Greenstreet, the Vincent Price-alike teacher, the dog with the Elsa Lancaster-Bride of Frankenstein hair), but this is animation after all. One girl in particular with huge eyes and a sunken face looks like she just sucked on the sourest lemon possible in the universe. They look great, in that generic Gorey-Burton-Nightmare Before Christmas-Corpse Bride way that we've come to expect.

Of course there's also a relatively normal girl who looks like a young Winona Ryder circa Beetlejuice, who's something of a friend to Victor, who is, of course, voiced by Winona Ryder. That made me laugh.

I really loved Sparky, the dog. He's just a dog, not a particularly heroic or Rin Tin Tin-like one, but a loving and loyal pooch. Except for his tail's propensity for flying off, to the accompaniment of Victor saying "I can fix that", and for the bolts in his neck, and the stitching keeping his insides inside, he's the ideal childhood companion for any kid in middle America.

That spirit of ignorance in the town raises its empty head, and forces the science teacher to tell the parents and teachers of the town that they are all stupid ignoramuses, that science is the only way, and anything else is like watching cavemen beat each other with sticks whenever it rains. It gets him fired, but not before he explains to Victor that the most important element in science when performing experiments is love.

Love? What? Throw the scientific method out the goddamn window, the secret ingredient is love.

This completely goes against what the teacher was booted out of the town for, but it's meant to explain something peculiar when other more ruthless kids start performing their own inventive experiments with lightning in order to bring their dearly departed pets back.

In case you've never seen any of these kinds of stories before, the other resurrections go very, very wrong, but not in too horrific a way, at least for the humans involved.

To not spoil the rest of them is hard, but my favourite is the turtle, called Shelley, of course, who turns into a towering Gamera monster who threatens to tear Tokyo, sorry, New Holland, apart.

Being a kid's flick, it doesn't really come across as a lesson about learning to let go, or learning that one should not play with unholy forces bringing the dead back to life, or honouring the dead by leaving them dead.

It more gently says that if you are going to resurrect the dead, do it with love, because that way whatever comes back isn't going to try to kill you and everyone else. Aesthetically and with multiple references to it, it might be about Shelley's Frankenstein, but it doesn't have the same themes of hubris, of arrogance in believing oneself the equal of God in the creation of life, of being punished for that presumption. Sparky also doesn't murder any children on a swing or hang out and smoke with any blind men. But he save Victor, and in turn is saved himself.

I liked it, my daughter liked it but promptly forgot about it once it was over, and I'll probably enjoy seeing it again. It's pretty quirky and off-putting, rather than feeling like a generic and safe kid's entertainment, but it doesn't pretend to be anything dangerous or avant garde. It's hard not to see all these protagonists that Tim Burton creates as idealised versions of himself, but hey, those kinds of macabre loners tend to appeal to me regardless, so it would be churlish to complain.

It's not an action-heavy animation until the last section, and it fairly breezy and quick for its length. I loved the Frankenstein motifs, and the monster movie stuff, and really liked it a whole hell of a lot. Again, it's a case of my cutting a lot of slack for an animated movie because of the physical stop-motion animation, which oddly I find comforting.

--
"Ladies and gentlemen. I think the confusion here is that you are all very ignorant. Is that right word, ignorant? I mean stupid, primitive, unenlightened. You do not understand science, so you are afraid of it. Like a dog is afraid of thunder or balloons. To you, science is magic and witchcraft because you have such small minds. I cannot make your heads bigger, but your children's heads, I can take them and crack them open. This is what I try to do, to get at their brains!" - and yet the parents aren't comforted by this - Frankenweenie