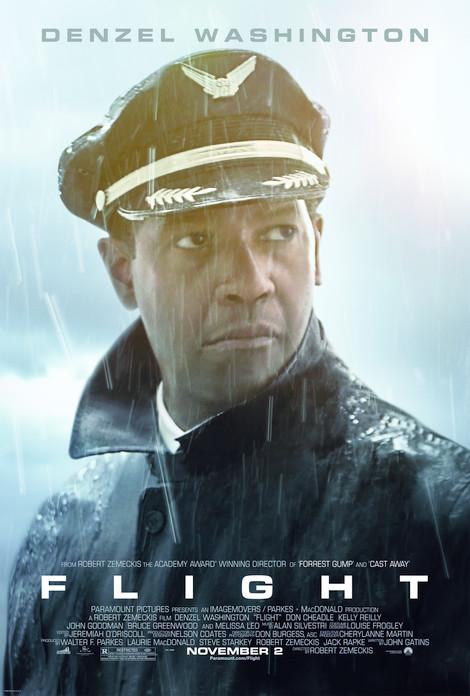 I don't care what anyone says, you're a goddamn hero
and a role model to us all

This is a strange flick, with strange rhythms and strange themes. It seems like it’s going to be about one thing (a tremendous plane crash), and it ends up being about something completely different (alcohol addiction). Even then, it seems like it’s going to be more about what an unrepentant arsehole the main character is, ably played as always by Denzel Washington, than any kind of redemption, and then it shifts again.

I wouldn’t say the shifts in tone and purpose confounded me or surprised me, but the truth is they didn’t leave me any the wiser about anything inside this film or out of it.

As the film begins, a grumpy middle-aged man awakes, but not before we see his naked bed partner go through her morning routine. The routine involves finishing off last night’s booze, taking a few puffs of the chronic, and bumping a few rails of cocaine.

That sort of behaviour is all well and good for rockstars, primary school teachers and televangelists, but we see with shock and horror that this chap with this morning regimen is a pilot about to fly a plane. And the guy is still drinking, even as he’s flying!

That’s not right, is it. Something goes catastrophically wrong with the plane, rendering it very much unflyable. But it’s drunken Whip Whittaker to the rescue! Even three sheets to the wind, he’s able to carry out, with some help, a sequence of moves which seem like they would cause the plane to crash even quicker, but somehow keep the plane which desperately wants to crash upright.

While all these shenanigans are going on up in the air, a redheaded heroin addict (Kelly Reilly) scores some killer stuff and bangs it against all advice, nearly offing herself. The people trying to get her from skid row to the hospital look up in time to see a commercial jet flying by upside-down 500 feet from the ground.

The whole plane crash sequence is a masterful exercise, tightly focused, horrible in its details, and totally nerve-wracking. I felt like I was on the plane, wishing with every fibre of my being for it not to crash.

The rest of the film, and there’s another hour and forty minutes of it, doesn’t really match the intensity of the dynamic first half hour. I found myself yearning nostalgically for the plane crash.

That’s not to say that the other sections of the film are less successful: they’re just not as compelling. I’ve been watching Denzel play minor variations on the same kinds of ‘intense’ characters for decades, and he can do a role like Whip Whittaker in his sleep. He’s just not that interesting as a character, really. Being a drunk, even a heroically drunk drunkard, isn’t interesting in and of itself. I know, trust me, I know.

The rest of the flick after the crash is mostly about Whip perpetuating the lying and selfishness that got him into this mess in the first place. We never really get a sense of why he’s such an addict, but then petty explanations can be insulting sometimes. He is who he is, and insists that he’s drinking because he chooses to, not because he has to, though clearly he’s not close to being a functional drunk.

Lawyers, representatives from the pilot’s union, the infrastructure around the airline industry all seems to be both gearing up to destroy Whip and also to protect themselves. After all, even if he landed an unflyable plane, in an inspired manner no-one else could have thought of and executed, he’s still guilty of operating a plane while coked out of his mind and drunk off his arse, and would be looking at serious jail time regardless of the outcome of the crash.

It seems, though, for most of it, that if Whip can manage to stay away from the booze on at least the important days, he’ll be able to get away scot free. His addiction, though, and the magnitude of his assholishness don’t seem to allow for that.

It’s hard to know where our sympathies are meant to lie. I don’t think Whip is a sympathetic character, and I’m not sure we’re meant to sympathise with him either. But then what are we meant to be doing up until the Big Moment at the end? Do we want him to walk away from this and potentially fly another plane into the ground? Do we want him to be punished? Do we want to see him clean up his act and live life on the dull straight and narrow like the rest of us?

During his hospital stay he interacts with the heroin addict mentioned earlier, Nicole, and they strike up an unlikely friendship, and he tries to help her out of destitution. It’s kind of implied that it’s sexual, but I can’t imagine a drunk of his magnitude being able to perform. Plus he’s got about 30 years on her age-wise. This relationship is a creepy one, no doubt. Just before he brings her into his house, he goes through an elaborate and extended clearing out of all the booze in the places, dozens and dozens of bottles hidden everywhere. But he gets rid of them all, and is sober for probably a day or two. When he goes to take Nicole off of skid row, he’s drinking from a flagon of vodka. Clearly he wants someone fucked up to get fucked up with, and there’s the implication that choosing someone who’s already fucked up means his good times will never stop rolling.

She’s an interesting character, but she’s not very well developed. She seems to be on a completely different path to Whip, in that her overdose scare has given her the incentive to clean up her act, and we’re watching her do so without noting much more than the initial AA steps that she takes. She tries to encourage Whip to clean up his act, but he’s pretty happy with where he is, thank you very much.

There’s an odd (odd at least to my ears) emphasis on Christian god-bothering that goes on in this flick, and I can’t tell if it’s heartfelt or satirical. Naturally, some of the people in or around the crash thank the Lord Almighty for their salvation from fiery doom, but some, like Whip’s co-pilot’s young wife screech “Praise Jesus” in a way that makes it seem like maybe the flick is taking the piss out of them.

It does lead to a great scene where Whip, who clearly doesn’t submit himself to any higher power than his own addiction, pretends to pray along with the godbotherers in order to keep them on side. That gave me a laugh.

Not much else did. Much of the flick seems like he’s going to get away with everything, almost as if we’re supposed to be getting off on the magnitude of the transgressiveness, because it seems like he’s never going to have to account for himself, which is even more perplexing considering how the flick ends. There’s very little to indicate that Whip is in any way interested in redeeming himself, or changing how he lives, even if this kind of story has the expected resolution recovery dramas always do.

If that’s the case, then I’m not that bright, having been surprised by a conventional ending. I didn’t see that coming.

Denzel is fine, as always, but this character is not a stretch for him, and in fact it feels like he’s being a bit lazy in his portrayal. I know that’s unfair, but Denzel does roles like this in his sleep, by now. Even in his dreams I bet he yells a lot and glares angrily at people.

Flight was an interesting enough film to watch, it just felt a bit pointless. Part of me wishes the flick could have been a bit more daring in its resolution (as in, having an ending that felt less like an afterschool special, and more truthful for that character) and honest about the ugliness of alcoholism.

Here’s a better ending, a far more chilling ending to this film, which, from now on, will always play in the non-director’s cut in my mind: the last shot is of Whip Whittaker walking manfully like the pimp that he is back into another cockpit, ready and coked-up to fly the friendly skies again.