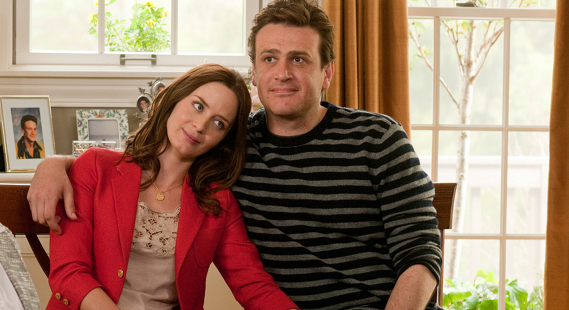 Just say no to marriage, people: gay or straight it's
always a mistake

Is five years a really long time for an engagement? I've got friends who've been engaged for fourteen years. Where's their parade? Where's their movie?

And they definitely deserve one. These two people in this flick? Hmm, not so sure.

Emily Blunt, who is trying to be in everything that comes out at the moment, and Jason Segel play two people, Violet and Tom, who love each other enough to be in a relationship, but not enough to transcend the array of problems that surround them. Mostly, the flick seems to be about the sacrifices one partner has to make in order to keep the other partner happy. The 'sacrifice' isn't anal, or threesomes or cuckolding fetishes; in this day and age, it's employment. One member of the couple gets the chance for their ideal job, necessitating a move to a new town, for the job that will fulfill and empower them, and the other one is left with nothing.

It's not fair, is it? Of course, one must weigh up a lot of factors when deciding if this is the right way to go. How much do you love the person? How great (and how well recompensed) is the job they want, and the versa of the vice is, how attached are you to your town and your fulfillment through employment? How easy will it be for you to find work in the new place, or to develop new support networks and find fulfillment outside of your better or worse half's ambitions?

These are questions people ask themselves and each other all the time, especially in these economically strenuous times in which we live. And the characters here, before leaving the sunny, cosmopolitan metropolis of San Francisco for the frozen wastes of Ann Arbor, Michigan, have the discussion.

A reasonable, intelligent person assumes that such a move could put some kind of burden on their partner, that their partner might be martyring themselves, and that their partner would eventually resent them. Violet brings that up as her primary fear. Tom demurs, and convinces her that nothing could be further from the truth. It'll never happen. He's not going to resent her for having to give up his dream job as a chef in order to trail behind her as an academic's spouse.

The scenario is less one rife with comedic or romantic potential, and more a source of drama, lots of drama. I know it's marketed as a romantic comedy, and there are certainly lots of comedic bits in it, but there are also these long stretches of drama which are anything but funny. They're just flat and depressing.

As Violet's career / star ascends into the heavens, Tom's fortunes decline into shame and ignominy. She works exactly in the field she wants, being the Psychology department at Michigan U, surrounded by the best and brightest. Tom works in a bagelry / deli making bagels for the hipster masses. He starts work at 2 am. She starts work whenever and probably works 5 hours a week when she's not designing idiotic experiments that test absolutely nothing. She's validated by her work; Tom is demeaned by his and by hers, and even better, is relegated to the presumed unenviable role of an academic's "wife".

If we hold some of that to be true, then naturally there's hay to be made from capitalising on the resentment men might feel towards their female partners (let's just keep the argument about hetero couples for now, though I'm sure people in same sex relationships/marriages have plenty of similar resentments) for outpacing them career-wise. Let's leave out the money aspect for now. My problem is not with arguing whether the phenomenon exists or not. My problem with it is how horribly reactionary, how stodgily conservative the argument is, even used as the premise, or part of the premise of what is meant to be an entertainment, for us the dull-eyed masses.

Tom's character arc is a horribly depressing one. Sure, he's funny and quirky and all that bullshit, but what he becomes as he squashes his dreams for Violet is beyond a parody. His guide down this path of emasculation (because let's state explicitly what the film is saying: a guy whose partner earns more than he or who has a better job than he does is virtually castrated) is another 'academic spouse', presumably with an ambitious wife, who takes up knitting, who looks after the kids, but who also needs to lash out at the world by hunting deer to feel like he's at least partly a man.

This kind of stuff is not new. This is the kind of shit I'd expect from the 1940s, where movies and books were trying to convince women to abandon the jobs they took up during the war to let the men folk be men again.

And yet this is 2012, and these messages are delivered under the guise of 'edgy' comedies from creative geniuses like Jason Segel and Judd Apatow.

As Tom and Violet try to navigate their way through these competing resentments and preconceptions of what their lives are meant to be like, around them is the usual array of people you find in Apatow flicks, in some cases the kinds of people who always play these peripheral roles. They're not that funny, in most cases, although the biggest laugh I got out of the flick was when Violet and her co-workers are toasting each other at after-work drinks, only to always find someone to exclude during their gushing speeches.

Of them, I think it's worth noting that Violet's sister, tasked with providing comic relief (Alison Brie, who's as good in this as she is in everything she does, from Mad Men to Community and ever onwards) shags a moron, gets Knocked Up by him, and marries him to the great joy of all concerned. Such an element can't help but point to the overall conservative and anti-feminist approach that the flick has towards its female characters, which for me overwhelmed the basic story of whether we were meant to care if Tom and Violet were ever going to get married, as if that truly mattered in the scheme of things.

And to that I say, in the immortal words of Eliza Doolittle from My Fair Lady "Not fucking likely". The flick is drab for much of its length, sections of it made no sense or point and were completely unfunny, it's way too long (by half an hour), and some of the scenes with Blunt and Segel having dramatic conversations in bed didn't ring true in the slightest. They had what lazy reviewers call 'chemistry' only in those scenes where they're smiling at each other (she dressed as Princess Diana, he as a rabbit) and are silently embodying the joy of meeting someone awesome for the first time. Not very often otherwise. The ending also depended on a reactionary outcome so fucking reactionary that it should be (but won't be) insulting to everyone, since the point seems to be that Violet's only path to happiness is to negate everything she worked for in the first place. Sisters unite indeed.

My issues with it all shouldn't make it sound like there's not a lot to like in the flick. There are moments of sweetness, I chuckled quietly a few times, and Rhys Ifans as Tom's rival for Violet's affections is pretty strong. In a scene where Tom hopes to kick Winton's arse, it quickly flips around since Winton is pretty spry, and Tom has to drunkenly ask Winton to pretend to be afraid of Tom kicking his arse instead.

Also, the ranting Hasidic rabbi screaming about Zionism at the rehersal dinner was pretty funny too.

It's not a complete wash. I enjoyed this as much as I can enjoy these things. San Fran looks great. Michigan less so.

I just wish these arguments about male insecurity weren't as common, as frequent and as boring. They're fucking boring. The film starts off by saying that love is not enough when it comes to the problems two people face in a relationship. And it ends by saying nothing more profound than all you need is love, and to give up professional aspirations, ladies. There's plenty of other stuff we could be saying about men and women these days, surely?