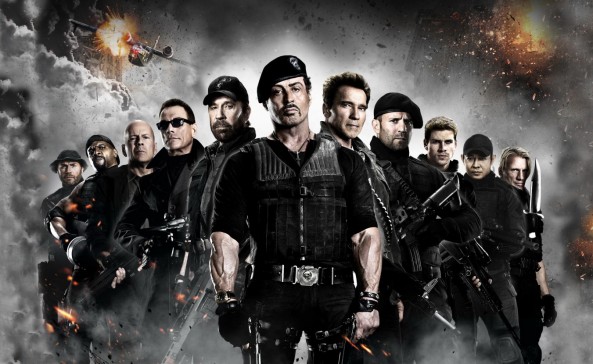 Expendables 2: Each actor being even more expendable
than the last

Yeah, well, it’s not like I was expecting Gone With the Wind…

The first flick in what appears to be this ongoing series worked for me mostly as a palette cleanser, but also because I watched it on opening day with a good buddy also steeped in the lore of 80s action movies. Plus we were drunk, which helps anything and everything.

This I watched alone, and bemused, though not pre-emptively. I went into it hoping, like I always do, for something magical.

What I got was a tired old bunch of men who aren’t really that old trading on glories so faded I barely remember what I liked about them in the first place. Look, time and age makes fools of us all, but the main attraction is meant to be "washed up action movie stars kicking ass one last time" one more time. A Once More Unto the Breach, you ancient bastards, or we’ll fill up the wall with our retirees type of deal. And it’s not really that appealing.

Does anyone really want to look at Stallone anymore, in any capacity, for any reason? Age, surgery, obscene and illegal amounts of injected Human Growth Hormone have all conspired to make his face look like a melted wax work of himself. Gods know looks aren't everything, and I am certainly no work of art myself (unless I'm something drawn by Robert Crumb or the artists who work on Adventure Time), but at this point Stallone looks like his make-up artist is actually a mortician who hasn't been told Stallone is still technically alive. Those sounds emanating from his mouth? That's just post-mortem gas escaping. Lords know it doesn't sound like human speech.

The first flick had a lot of shit blowing up, and a lot of people being shot up so badly their bodies (CGI of course) exploded into bolognese all over the place. There were twenty or so 'good' guys, a bunch of faceless bad guys, cameos by Bruce Willis and Arnie, laborious one-liner quips delivered lazily, and a killcount in the hundreds.

It’s not that hard, it pretended to be nothing more, and it delivered. I don’t think Expendables 2 delivers even on that modest level of requirement.

The opening sees a bunch of Nepalese people in an awful town acting awful to each other. Our Heroes, led by Barney (Stallone) arrive in a whole bunch of vehicles, and do their darndest to kill all these bad guys, the main one of which is callously bludgeoning some guy strapped to a chair with a bag over his veiny, Austrian head.

As openings go for any other kind of film, it’s a horrifying mess, but the makers assume no grannie out for the day with her bridge club will be walking into the cineplex and watching Expendables 2 as a blushing virgin unfamiliar with the intricate backstories of all the characters involved. They’re old former military types who ply their trade killing generic minorities employed by warlords wherever they’re asked or told.

Jason Statham isn’t a has-been just yet, but when you’re playing second banana to Stallone, it puts a kind of stink on your future. Here he’s Barney’s second-in-command, and his surname is Christmas, and his purpose is to have pissy little arguments with Barney that are meant to show that they’re close friends of long-standing.

What they really show is that Statham is embarrassed by his dialogue, and that Stallone barely speaks English anymore, if in fact that is the language he’s been talking in all along.

When they rescue their target, whose name I’m kindly not going to spoil, one of Barney’s Expendables is told to give the rescuee a weapon. He advises the chap that if anything happens to his gun, he’s going to “terminate his ass”.

To which, in still heavily accented English, the respondent responds “In your dreams.”

Yes, I’ll be back, we’ll all be back, hasta la vista pasta, yippee-ky-ay, I’m back: these are all delivered, along with a bunch of other phrases, with a faint look of embarrassment. Which is appropriate, because they should be embarrassed by this. Most of the ‘funny’ lines fall like chunks of dark matter to the ground, never to be picked up. You don’t even want to make eye contact with someone after hearing them.

Arnie, Stallone, Willis, Dolph Lundgren, Jet Li, um, who’s missing from the 80s? Could it be Van Damme? Well, he’s not missing, really, but they rounded him up anyway to play the villain. And the ‘funniest’ thing is, they call him Vilain, as in, ‘ve-laine’. For a while I thought maybe Tom Verlaine, former frontman for legendary punk band Television was the main antagonist.

It sure would have been preferable. Instead of two senior citizens battling it out at the end, we could have had Verlaine singing Marquee Moon to torment Stallone with. I certainly would have preferred that to the unfortunate alternative, which is what we got.

Jean Claude Van Damme... who was he again? Oh yeah, the Muscles from Brussels. He hasn't been relevant in cinema for decades. His reappearance here at first gave me a weird frisson. After all, he used to be a work of art. I don't mean physically, just that his unique inarticulation perfectly suited idiotic characters in awesome flicks as diverse as Bloodsport, Double Impact or Universal Soldier. And then there was always that bulge in his forehead I could never stop looking at.

My problem here is that they bring him into the flick and don't really get him to do anything that any other has-been or never-was could have provided. They also don't have him there doing anything with any wit. The same could just as easily be said of the creepy Chuck Norris cameo, who mysteriously appears, then walks off, then appears again whenever they need him, as if someone pressed the Chuck Norris app button on their smartphone.

You might think I'm something of a fuckhead looking for wit in a flick like this. Let me put it another way: funnier, better writers could have made this a glorious action-fest that referenced, played upon, artfully reminded us of these chaps' glory days. Someone like Edgar Wright (which obligates the involvement of Simon Pegg and Nick Frost), or even the French guys behind the OSS 117 spy parodies could have done something more worthy with this.

Instead, the only lead we get is not in the copious CGI bullets, but in the dialogue.

As Our Heroes trek across, I dunno, Russia, I guess, and come across a fabricated American town from before the fall of the Soviet Empire. Blah blah happens, and then Norris appears out of the smoke of gun and cannon fire. Our Heroes are unsure whether he is friend or foe, and tentatively question him. Someone says, in a flat monotone: I heard you got bit by a king cobra.

If Stallone said it, it was mostly devoid of consonants, so it probably sounded more like 'Eh! I yer you eht uh yin yora burble burble yo Adrian'.

To which Norris flatly responds, "I did, and after five agonising days, the cobra died."

The Heroes wait, wait, wait, and then laugh like these retards have never heard the joke or of the internet before. They give Norris nothing to do, nor do they give him anything worthy of the esteem and respect with which he deserves to be honoured, parades and shit, firstborns being named after, and so forth. There were way better Chuck Norris Facts they could have used right there.

He still probably comes out of it better than Arnie, who looks like some maids need to come along and do some housekeeping on him. The most they have him do is stand there with a big gun, miming that he's firing it, in a way that makes it swing around wildly, like a drunk senile guy at a urinal. They could have had the decency to allow him to lean it onto a Zimmer frame.

But he gets to say "I'll be back!" How can I object to that? Oh wait, he also gets to say "I'm back!" when he appears at a place he's never been before. How's that for funny, you lucky so-and-sos in the audience?

If anyone comes out of this okay, and doesn't make me wish that there was a mandatory retirement age for Stallones and Arnies and no-one else, it's the young people, of which there are only two. There's a Hemsworth in this for a brief period of time, I can't recall if it's Liam or Chris or Zbigniew, or it's one of them. He does some acting, moreso than most of the other actors. There's also a young (comparatively, though coal is young compared to some of these luminaries) actress called Yu Nan who is pretty nice. There is an implied romantic element between her and Stallone which is enough to turn the stomach of an iron man, and thankfully it didn't turn literal because I would have had to gouge my eyes out.

She can also fight, which is a pleasure to behold. She and Statham, completely on their on, get to have a few impressive dust ups with faceless henchmen. This almost makes up for the frankly boring gunfights that permeate and eventually cap off the flick. The ending is so underwhelming that this is what the final showdown shootout in an airport looked like to me: idiot heroes standing stock-still firing out bullets randomly, and a bunch of enemies throwing themselves into the paths of those bullets.

That shit is boring, but at least it's not as boring as listening to these lunkheads talking to each other trying and failing to be funny. The movie's worst failing is that it didn't entertain me, but it's biggest problem is that it's just shittily made. It looks shitty much of the time, and the editing is amateurish. If the film was made on a tiny budget but made up for it with "More Energy!", that would be okay, but we're talking about a flick they spent $100 million to make. That's just lazy.

It's a waste of time and money and actors. These oldies need something more worthy with which to spend the meager amount of time they have left on this mortal coil.

I guess there's always the next one to look forward to. Maybe they can round up Michael J. Fox, Ralph Macchio, Molly Ringwald and Judge Rheingold to play the villains that Nicolas Cage, John Travolta and Scott Baio can kill, or vice versa?

Avoid at most costs

5 reasons there is nothing for any of you here, move along out of 10
--
"I now pronounce you man and knife" - I now pronounce myself profoundly bored - The Expendables 2