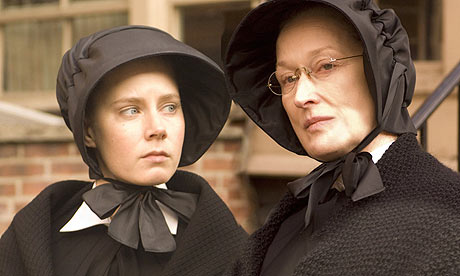 They're not Amish, oh no, they're just penguins

I have doubts about this film. It’s well made, there’s no doubt about it. It’s an interesting story. My doubts stem from the fact that Meryl Streep, for all her sheer wonderfulness, doesn’t always hit it out of the park, as an American might say. Being an Australian, I guess I’m obligated to say that she should be hitting it for six, but the truth is I like cricket even less than baseball, if it’s even possible.

My problems with the whole wide world of sport shouldn’t bleed into the quality time you spend reading my reviews, so I should back down, I guess. The fact is, Meryl’s performance in this was so off-putting that I could barely appreciate the flick at some points. Every time she spoke or overdid some physical mannerism or affectation, it would kick me out of the film and remind me that I was watching some of the alleged prime thespians of their day battle it out in a no holds barred Battle Royale.

Again with the sport, though wrestling is hardly a sport in the real sense. She plays a nun, Sister Aloysius, with the fierceness and demeanour of some kind of treasure-hoarding troll. I appreciate that she’s meant to be this fearsome personage at the school where she rules/teaches, but c’mon Meryl, don’t you think you took it a bit too far? She looked and acted like she was auditioning for the part of Gollum in a Lord of the Rings remake.

And don’t think it’s too soon. Give it a few years.

Her young protégé is a sweet but firm country bumpkin called Sister James (Amy Adams, who plays it well though it’s all wide-eyes and golly-gees the whole way), who is as afraid of Sister Aloysius’s disapproval as she is of becoming her. All the same, when she spies one of the boys in her care in what seems to be a compromised position, Aloysius is the first one she runs to.

In their parish, which is somewhere in Brooklyn in the 1960s, obviously Sister Aloysius’ authority is not absolute. Above her is the parish priest, and above him is the bishop. Aloysius may be a bully, and a force to be reckoned with, but she respects the chain of command, knowing that the word of a sister is nothing against the authority of the clergy whom they serve.

Thing is, though, she’s got an ego on her. The complete lack of evidence somehow, for some reason, gives her the certainty that not only must the new priest be guilty, even though she doesn’t know what he’s guilty of, but that she must destroy him lest he form another ‘unhealthy’ relationship with another boy.

The boy (Joseph Foster) himself is hardly a character, he’s more of a plot device, or a chess piece. Sister Aloysius doesn’t give a good goddamn about him; she barely even knows who he is or anything about him. But through him she could achieve her strange desires.

What her one-nun campaign leads to is charged confrontations with the priest, Father Brendan Flynn (Philip Seymour Hoffman), where he seems more incredulous than offended at being accused of being a kiddie fiddler.

Before we start having an argument about moral relativism or anything about the huge, heavy dark cloud that envelops any discussions of the Catholics and their longstanding practice of covering up the activities of predatory priests, yes, kiddie fiddlers are evil and deserve to suffer torments even extreme Catholics can’t dream up in their hells more elaborate even than the many the Chinese dreamed up. And let’s not drag Roman Polanski into this either, yes, what he did was evil, yes, he deserves to go to jail regardless of the amount of blood and water that have passed under the bridge.

This story, clearly a play before it was made into a film, directed by the guy who wrote the play, plays upon both our natural horror at the prospect of a pedo preying upon children, but also on our natural reluctance, considering how annoying she is, to accept Sister Aloysius’s undependable intuition and certainty.

Those who expect evil from everyone invariably find what they are looking for. If you want to see the worst in the world around you, you find ample evidence of people’s fallibility. Catholics especially, or perhaps Christians in general, to whom all, even the most innocent are guilty of at least the sin of being human (otherwise known as ‘original sin’), see only darkness in the human soul, tempered only by the light of forgiveness through Christ.

Sister Aloysius sees nothing but sin in Father Flynn, mostly because apart from her belief that she possesses a finely-tuned gaydar, she doesn’t like the fact that he speaks of a gentler faith, tempered by doubt, where the rigidity of dogma and the strictures of correct expectation should be secondary to compassion, understanding and love.

This doesn’t sit well with her, since she has a far more Old Testament lean in her approach to matters of faith. Her world is entirely black and white, lacking any shadings. And she’s happy to deliver a beating if need be. She wants to be feared, she wants the children and the other nuns to bow the knee unthinking to her, but she also believes that she’s earned it.

Most of this elaboration probably doesn’t endear the film to someone who hasn’t seen it, in that it doesn’t make it sound very interesting. I think it is interesting. Even if Meryl is a tad overdone, her interactions with Hoffman and Amy Adams in the three key roles set up a wonderful dynamic. Especially with Sister James, but especially with Father Flynn. All three play well off each other, especially since Adams and Hoffman deliberately seem to underplay it compared to all-over-the-shop Meryl, who throws everything into her performance, including a few kitchen sinks.

The other feted scene from the film involving someone else not of the Holy Trinity involves a walking meeting between the boy’s mother (Viola Davis) and Sister Aloysius, where the good Sister tries to manipulate events to her will, only to find out more about the situation than she ever could have wanted to know.

That meeting and great scene further complicates matters for us as well. The truth is, this film isn’t a mystery, even if it seems as though the impetus arises from a crime. There aren’t shocking twists or mistaken identities or last minute surprise witnesses whose purpose is to falsely propel a drama that is more about the personalities involved and their conflict with each other. Father Flynn gets increasingly more exasperated with Sister Aloysius, who becomes more committed and more certain as to the righteousness of her actions.

The more certain she becomes, however, the less certain Sister James becomes, and she really starts to question whether the kind of nun she wants to become is one in whom certainty without proof predominates, or whether doubts will temper her certainties, but not her faith.

It really is a genuinely good film with great performances, but I wonder as to whether people will feel cheated by a story with no easy answers. But let’s look at it basically: the flick is called Doubt after all. People who are sent into rages by the prospect of doubts, by the lack of certainty, are probably the main targets of a story like this. Reconciling doubt with matters of faith, which requires accepting as truth something which isn’t independently verifiable, is probably one of the most human struggles we possess, and this interesting drama finds plenty of ways to illuminate many of these issues and still keeps many of the characters as characters instead of mouthpieces.

The tension between the nuns and the priesthood in the Catholic Church, and the subservient position it put the nuns in, is also well realised, in that, considering the era and the setting, much is made of the fact that even if the worst about Father Flynn is to be believed, nuns really had no recourse against such a being because of their lowly status comparatively within the hierarchy. The word of a nun, even when right, didn’t count against a priest, and it is only the sheer force of Sister Aloysius’s will that puts Flynn at risk.

The last line, as well, is an absolute killer. My misgivings about Meryl evaporated with that last line. It flicked a switch for me in my head as well, allowing me to appreciate just how well put together this whole movie is. Sure, there’s not a lot of action, but it’s probably one of the more interesting dialogue-driven movies that I’ve seen in a long while.