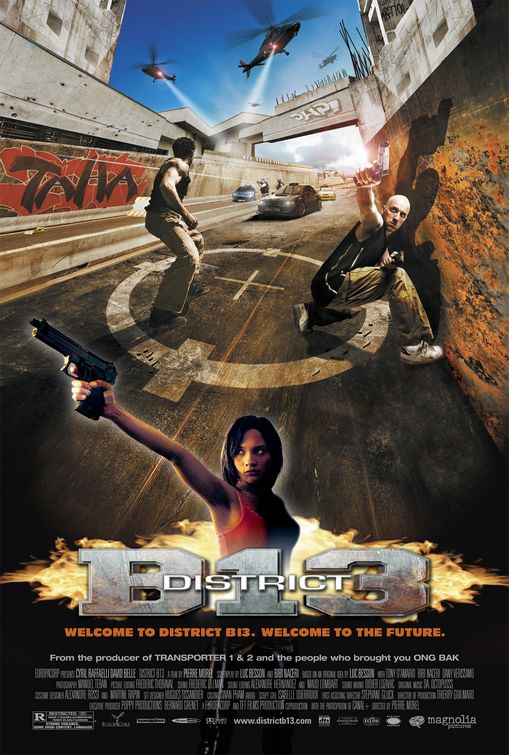 Well, and his too, I guess. Belle is considered to be one of the creators of parkour, along with Sebastien Foucan (who starred in that Casino Royale section), David Malgogne and Stephane Kazuma, but I’m sure they all disagree about who REALLY invented it. What we know for certain is that these guys were palling about when they started doing this crazy stuff, and now they wants to get paid, naturally.

You don’t want this guy for his acting abilities, I’ll tell you that much. As the movie’s hero, he is far more impressive when he’s moving than when he’s standing still and talking. There is something exhilarating about watching a guy jump distances and heights that you just feel, deep down in your bones, that humans should not be able to. He does it and makes it look too easy, like gravity doesn’t apply as much to him as it does to the rest of us.

Joining him in his athletic pursuits against evil is another tidy little stuntish guy playing a cop (Cyril Raffaelli), who stands for the righteous application of the law when the law itself has been corrupted.

See, this isn’t just an action flick, oh no no no. This, being a French action flick, has political and sociological subtext coming out of its freakin’ ears.

Set slightly in the future, a slum section of Paris has been cordoned off and abandoned by the government. Hence the multiple titles referring to an area numbered 13. Barrio, ghetto, slum: these are not terms used lightly in this context. There are parts of Paris considered to be overrun with thugs, immigrants and criminals not safe for the average Parisian, that the media outside of France only tends to refer to when riots are being rioted and cars are being set on fire.

So these people living in this district are essentially cut off from the rest of France. Hence the fact that it looks like one big public housing estate.

In the States they call them projects, in Britain they call them council estates, and in Australia despite the fact that the words no longer mean anything, they are known as housing commission flats. In France they are Habitation a Loyer Modere, HLMs, which constitute almost half of the available rental housing in some of the dodgier suburban areas where wealthy white French people have no desire to live and would love to see walled off, if this flick is to be believed.

Can you see where I’m going with this? So much of the population of these HLMs is your angry poor, your immigrant (legal or otherwise) and the prime pickings for your bored or criminal underclass.

You could even say that many of the denizens of these places are, shall we say, swarthy in complexion and not worshipful of The Jesus. Now you’ve got it: the French government hates poor people, especially when they’re Muslim and black.

Now you know where this is going. The government orders supercop Damien to infiltrate the pesky locked-down slum with the intention of stopping a neutron bomb from being detonated, but there’s something more going on. He is forced to join forces with Leito, a local who knows the area and is a thorn in the side and eye of the local crime lord Taha (Bibi Narceri), who has the bomb in his safekeeping.

Leito has additional motivation for wanting to get at Taha, since their previous interactions led to Leito being in jail, and his sister ending up as Taha’s drugged up sex slave.

The moment I saw the subtitles referring to a heroin-pacified sex slave, I knew that Luc Besson had to have been involved with this movie. Luc Besson made some decent films about twenty years ago but now only attaches his name as producer to some pretty mindless French action films, many of which seem to have a heroin-addicted sex slave in the story just so one actress has something to do in the film. In Kiss of the Dragon, a terrible Jet Li flick set in France, Bridget Fonda had the privilege of assaying this vaunted role. Here it’s some chick who looks like a less drug-addicted version of Asia Argento, who has nothing to do but loll about as she tries to wake up from a six-month heroin bender.

The opening segment where Leito tries to evade Taha’s thugs for having stolen and destroyed a drug shipment is the highlight of the flick, as he propels himself great distances or from heights that make your ankles and knees ache from sympathy. These guys are going to have terrible arthritis in their middle age, at least those who live that long, but, for my money, it’s worth it because we get to see some impressive stunts that have little if any wire use and no CGI effects.

It ends when Leito thinks he’s found a way out of his and his sister’s predicament by dragging Taha to the police. The police, housed at the outskirts of B-13, aren’t interested, as they are leaving the place, being outgunned and outmanned by the local thugs. They make a choice that seals Leito’s (and the police commander’s) doom, and sends Leito’s sister into etc etc etc.

You should be able to guess by now where that was going. Six months later, Leito has his chance at freeing his sister, but more so has to protect the entire slum from the actions of an honest and well-meaning cop who just doesn’t understand the lengths the government is willing to go to in order to eradicate the people it sees as annoying and inconvenient. You see the neutron bombs attraction lies in the fact that it can kill everyone in B-13, but leave the buildings alone and habitable. In fact, teams of developers could be ready to roll in to gentrify the place before the dust has settled. If only the poor scum could just die already.

There is humour in this flick, usually of the cloddish, low-brow variety, but there is enough for it not to be completely worthless apart from the stunts (as in, unlike many of Jackie Chan’s recent flicks). The crime lord Taha is particularly funny, especially when he degenerates into a Scarface-like maniac snorting mountains of cocaine and killing henchmen just for his own amusement. He has this bloodless sociopathic stare which just looked perfectly appropriate for a deranged drug dealer with abandonment issues.

I’m just guessing there. Other ‘light’ relief comes at the expense of one of Taha’s henchmen, a mountainous thug called K2 (Tony D’Amario), presumably after the Himalayan mountain. He does little apart from use threatening sexist, homophobic language and stand around looking massive and a little confused, like one of Jupiter’s larger and dumber moons. He apparently died of a heart attack not long after the film was made, and had his corpse sent into orbit around Jupiter as, you guessed it, one of the gigantic planet’s larger, dumber moons. Something about his performance amused me, and I’m not sure what or why. Suffice to say he doesn’t spend any time doing that parkour/free running stuff, which is probably as well one of the reasons why he’s dead now.

American flicks often get ridiculed (by conservative opinionators, generally) for depicting a government willing to silence its own citizens in order to protect itself by any means necessary. How French people must have viewed such a set-up: that their government could happily contrive to kill millions of immigrants and Muslims, is not a mystery to me, because I looked into it, and it seems like they weren’t particularly phased by it. What did resonate with them was the idea that a government could withdraw infrastructure support to an area because of the undesirable perception of its citizenry (removing police, schools, essential services, utilities), and that it could be seen to profit in electioneering terms by deriding these so called scum (racaille, in Francais) to the rest of the country, since this is what happened in the last election as well.

It’s important to note that the riots that occurred in 2005 in response allegedly to the Danish Mohammed cartoons controversy, it was these racaille in these banlieues that went berserk and torched entire streets, so the film anticipated or was a product of these societal tensions impressively in advance. There are obviously tensions seething under the surface of French society, and, thanks to action-orientated flicks like this we can bask in the superficial seriousness of such situations pretending, like I do, that I now have a deeper understanding of these issues because I watched an entertaining but pretty mindless flick about guys performing incredible stunts and beating the crap out of each other.

I don’t know if others will get as much enjoyment out of this as I did, because in truth I’ve watched hours of parkour tapes and been entranced by it. And that social commentary stuff could have fit on a candy wrapper for all its relevance and complexity. But I likes stunts done well, and well choreographed action scenes. That’s just the kind of guy I am. They compare this to legendary recent Thai actioner Ong Bak, and the comparison isn’t invalid, but the emphasis is much more on the parkour than fights, which Ong Bak had in double spades. At 80 or so minutes, it’s the perfect length for what was, for me, an enjoyable, fluffy time.

--
“You really think the government would allow District 13 to be destroyed?”
- “Six million died for not having blonde hair and blue eyes.” – Banlieue 13