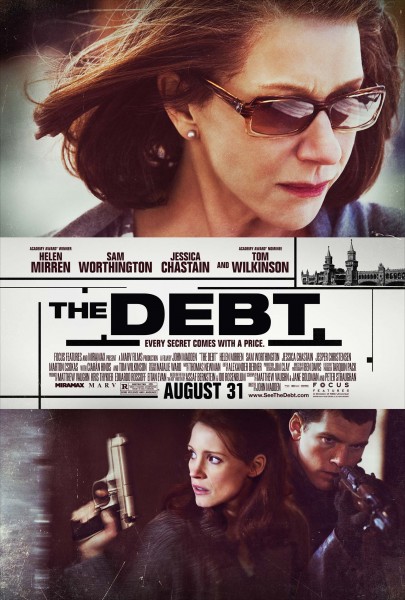 How bloody deceptive is this poster? You'd think this was
an exciting movie or something

Who would have thought a flick about three Mossad agents trying to hunt down a sadistic Nazi war criminal could be a depressing and unfulfilling trawl through the sewers of human weakness and failure?

Not me, proving how truly not bright I am, which is why I’m reviewing films instead of making them. But there’s nothing I can do about that now *sob*. So let’s just talk about the film then, shall we?

John Madden is, I’m sure he’ll be mortified to hear, not a director I’ve ever had much time for. The most famous thing he’s done is probably Shakespeare in Love, which has about as much to do with the actual Shakespeare as that recent hilarious flick Anonymous did, which argued that Shakespeare himself was too much of a bloody peasant to have ever written all those plays and sonnets, and so it had to have been the 17th Earl of Oxford, Edward De Vere. But even if he had something to do with Gwyneth Paltrow shooting forth like the poisonous, leprous star that she is, and she may have even won a goddamn Academy award, if I’m not mistaken, for her weepy performance, he obviously wishes that he was directing stuff that was taken a bit more seriously.

So, instead of following Gwyneth’s lead and popping out strangely-named children, he persists in making movies, much to our collective disinterest.

The Debt is about three characters in two timelines. In the 1960s, Stefan, David and Rachel are played by Marton Csokas, Australia’s Own Sam Worthington, and delectable redhead of the minute Jessica Chastain, respectively. Worthington is trying to make up for being in Avatar, and he assays the role nobly. Chastain doesn’t have to make up for anything, because she was great in Tree of Life, though possibly less so in The Help as the white trash Marilyn Monroe-lookalike. Csokas is always commanding and awesome no matter how terrible the flick he might be in, so he’s got nothing to apologise for either. Go on, breath a sigh of relief.

In the ‘present’, which is the 1990s, Stefan, David and Rachel are played by heavy-hitters David Wilkinson, Ciarin Hinds and Helen Mirren, sporting a wicked scar on her cheek that Lucky Luciano would have envied. As people age, I guess a lot of them lose, because of all the bad shit that happens, their capacity for happiness. Maybe that’s why the three of them are so glum all the time. They’re so glum, in fact, that the old version of David kills himself within minutes of the film beginning. And Rachel looks even more miserable than David does, if that’s possible.

She looks very unhappy. Are we supposed to wonder why, so early? Can’t they lull us in to a false sense of security first, at least buy us dinner and a few drinks before they fuck us all over? I guess Madden wanted us to know there was something very wrong with these people who, for all intents and purposes, are national heroes in Israel.

Well, if they’re heroes for something that happened thirty years ago, and nothing else interesting has happened in between, then I guess something that happened thirty years ago is the reason they’re still being feted as heroes, and also the source of their disgruntlement, if there is such a word, and there is, since Microsoft Word seems to be accepting it.

Naturally, people, we’re going to have to spend a lot of time back in the 1960s to really figure out why these people are so glum in the present. It can’t be because they don’t have enough money to make ends meet, or that they’re homeless. Israel has a wonderful social security system which more than looks after its elderly, as long as they’re not being blown up by suicide bombers, car bombs or dodgy gefilte fish.

No, the truth must be back in the past, back in the dim distant reaches of time where they made their bones tracking down those fuckers who played prominent roles in the Holocaust. It’s not something you can joke about, unless you’re Roberto Benigni, I guess, so I won’t even try. In case I haven’t made it abundantly clear thus far, this is a very grim flick with some very unhappy people in it.

The grimness comes mostly from the fact that the awful task that fell to these people is one you’d wish you’d never have to carry out yourself, but can see the desperate necessity of. Though he isn’t name-checked, information and hard work along the lines of what the legendary Nazihunter Simon Wiesenthal used to perform has uncovered the possible location of a monster who slipped through the cracks, and is living under an assumed identity. At the time when this is happening (1964), Israel is less than twenty-years-old as a nation after getting rid of the British in 1948. The wounds of the Holocaust are still fresh. Tracking down fuckers like Dieter Vogel, The Surgeon of Birkenau, is less a necessity than a crucial element of the shout that is ‘Never Again’.

The key difference is, unlike at least thematically, the Spielberg flick Munich, which was about revenge for the slaughter of Israeli athletes back in 1972, this isn’t meant to be an assassination. It’s not about revenge. It’s about justice being seen to be done, being of more important than just taking the guy out.

It is seen as necessary, vital, for the three operatives to capture and return Vogel (Jesper Christiansen) for trial. And so all their plans, all their actions, all their hopes are focussed towards getting their man.

Stefan, the eldest of the trio, is the ambitious mastermind of the operation, with the contacts and the wherewithal to deal with the big picture stuff. David, very well played by Worthington, is quiet and reserved, but he harbours a deep reserve of fury from having lost every living relative to the Holocaust, and his motivation is personal, not patriotic.

Rachel is, of course, the least secure about her role, and is crucial seemingly only because the target is working as a gynaecologist, and one of the other two guys rocking up to his rooms would raise a certain amount of suspicion, unless they’ve got a secret uterus hidden under all that manliness. She’s tough, though, so don’t let her vulnerability fool you. There’s something particularly difficult about her task, because she literally has to let someone she thinks of as a monster, someone who committed hideous torments on Jewish victims under the guise of scientific experimentation, inside her. Physically inside her, until she can confirm his identity, and they can move on to the next stage of their plan, which involves drugging him and smuggling him out of East Germany.

As harrowing as that must be for her, it becomes even worse when the Surgeon of Birkenau then starts getting into her head, in a manner which Hannibal Lecter would envy.

When the plan goes wrong, it goes really fucking wrong, and the team, undergoing its own tensions and shifts of emotion and allegiance, is under even more pressure, until this kindly old Nazi makes the situation explode.

It wouldn’t be unfair to say that the bits set in the 60s are more interesting that the bits happening in the 90s, or inaccurate, because it’s really well played in that section by the younger versions of the characters. The latter part of the flick, however, which has a tension all of its own, as Rachel is forced by the actions of the past to conduct one last mission thirty years after her and her team’s ‘triumph’, would have been compelling if it hadn’t been so unbelievably absurd.

Unbelievably fucking absurd. I found it almost impossible to take seriously after a certain point, because I can’t believe the story falls within the realms of human possibility any longer, even as I understand how it helps the story for it to be an unsatisfying and debilitating ending. It still doesn’t work.

I understand how the ending clarifies the title, because it explains who owes the debt to whom (whether you can argue that it’s Rachel’s debt to her daughter, or granddaughter, or the team’s debt to Israel is irrelevant, because ultimately it becomes the debt Rachel feels she owes to David, who wasn’t able to live with their actions in the past), but it falls apart for the viewer the way that it does for the characters. That’s not the fault of the actors or the director, because they can only put out the story they’re given, and in that it matches the original Israeli flick of the same name from 2007.

This isn’t history, of course. No-one’s claiming this is based on a true story. But the thing is, you know stuff like this happened, many times, and continues to happen to this day when things go wrong, like when their stolen ‘Australian’ passports don’t pass scrutiny, or when they kill the wrong guy like in Lillehammer, Norway when they mistakenly assassinated a waiter instead of the ‘right’ guy. So it’s not beyond the realms of possibility.

There is something absurd about expecting us, the audience, to swallow that ending, though. There’s something to be said for the truth, and for the revelation of the truth, but that had to be the hackiest way imaginable in this or any of the other universes, and it’s an insult to Dame Helen Mirren and the character that this is how it ends. All the seriousness and the grimness of the scenario flies out the window after this ludicrous point is reached, so I’m not even going to dignify it further by continuing to complain.

Move along, nothing much worthy of your time here.

--
“No matter what, the truth stays in this room” – that trick never works – The Debt