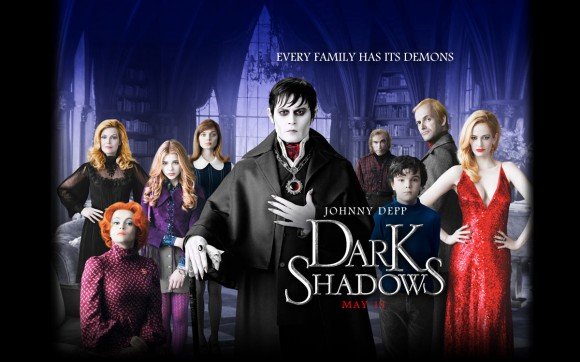 What a lovely family portrait of a despicable bunch of people

This is an artefact not just from the 60s, but from a time when we expected nothing more than to be entertained by something no matter how ludicrous it might be. Tim Burton may just be the most successful B movie director in the history of American cinema. I can't think of the last time or the first time he made something genuine, heartfelt and 'real', whatever that might be. He's happier with completely melodramatic fantasy, and who can blame him?

Johnny Depp certainly can't, which is just one of the many reasons why he's not only on board as the lead here, but also as one of the producers. I have no idea why Tim Burton and Depp thought making this would be profitable, successful or desirable to anyone else but themselves. But that's only because I know absolutely nothing about the show this is based on, other than it was a supernatural soap opera in the 1960s. Called Dark Shadows. That was probably even sillier than this.

People in the know, or with access to the tubes of the internets, probably know more than me, vastly more than me about this show. Soap operas have never really been my bag, especially ones from before my time, but it would not come as a surprise to you or me if such a flick made based on such a property would be a camp, lurid and utterly, utterly spastic showcase of all things Burtonesque and Deppish.

And, you know, it's exactly what you think it is, as trashy and camp as anything I've ever seen that doesn't have drag queens in it.

Thing is, though, I found it entertaining. I was heartily amused by it and laughed a fair bit. That's not the same as saying that it's a good movie. Oh, good gods, no. It's as pointless and empty as anything Burton does, and it doesn't make a whole lot of sense even within the context of a supernatural endeavour.

Who cares, though, when Johnny Depp, as lead character Barnabas Collins spits out archaic dialogue like "She has the most fertile birthing hips I've ever set eyes upon!" or "Aphrodite herself could not construct a more odious union!" It's funny enough. I spent most of my time just waiting for the next time he'd over-enunciate some ripe piece of verbiage.

Everything else? Eh. I am no fan, not at all, of soap operas, in general or specifics. I don't mind parodies of them, as on The Simpsons or Futurama, with the exemplary reoccurring stupidity displayed on It Never Ends and All My Circuits, which I summarise as "Another Shocking Twist!" and "Sexy Results?" respectively, but mustering even ironic appreciation for actual ones like Neighbours or Coronation Street or Days of Our Lives is something I'm not strong enough to ever do. Don't have it in me, sorry.

So, a flick unironically but very campily about a soap opera, any soap opera, from nearly forty years ago is never going to hold my attention with premises, homages, fan service cameos and call-backs to something I have no interest in. Also, it's very very very hard to care about anything with vampires in it these days. The only beastie from the screenwriter's bestiary I have less interest in currently in terms of ever watching another new flick or show about them or containing them is zombies. Goddamn zombies. Vampires are so played out that I'm bored just by the mention of them, but hey, let 'em keep trying. It's cute, in a way as long as it’s not in those bloody Twilight movies.

Depp plays a vampire, an old vampire from the 1700s, the scion of a wealthy family that builds a town they call Collinsport on the coast of Maine. He rejects the love but not the embraces of a servant girl (Eva Green), which is a really bad thing to do, apparently, but leads to unasked for immortality. I've always said you've got to keep the servants happy. Even more so, always treat all the people in the service industries, from food preparation to cleaning to anything else you can think of with respect and kindness, as if they are the people, which they are, who could piss in your food if you treated them with contempt.

Barnabas, a patrician who thinks it his birthright to use and abuse the lower orders, pays a price, but not an ultimate price. Something unpleasant happens to his girlfriend Josette (Bella Heathcote), he contracts a nasty skin / blood disorder, and then the next thing he knows, he's in a coffin for the next two hundred years, buried deep underground.

When he is awakened, or spewed up by an earth that no longer wants him, it is the 1970s, and the world is slightly different from the one he remembered, though the Collins name and mansion linger on. How these shmucks got to survive is beyond me, because they all seem somewhat pathetic, except maybe for Elizabeth (Michelle Pfeiffer), the matriarch of the remaining dolorous remnants.

There’s other Collins people, but I’m not going to bother talking about them, since they don’t really add that much, and it would give the impression that this difficult family with its complex dynamics gets equal screentime with Depp, which would not be the case at all. Other characters talk for a little while, and then Barnabas sweeps in, lovingly chews on the scenery, and then wanders off.

Burton’s main squeeze Helena Bonham Carter gets a guernsey as a doctor attached for whatever unlikely reason to the family, played like a blowsy 50s housewife on the most part, though she gets some good lines about her constant boozing.

Most of the movie’s humour comes from Barnabas being perpetually astounded by the modern world, or verbally inappropriate in a ye olde worlde “didn’t people talk and think funny two hundred years ago?” way, in the same way Mad Men manages to be every episode.

At first it seems like the point of the story is Barnabas’s desire to rebuild the Collins name and fortune in the town. Then it’s about trying to get rid of the curse of being a vampire. Then it’s about whether he’s going to hookup with the governess who looks just like Josette (played by the same actress, of course). But ultimately it’s about the conflict with the evil servant girl he fucked two hundred years ago, who is not only still around, but is still trying to destroy the Collins just because she was a downstairs person, and they were upstairs persons. She’s striking a blow for the proletariat, and is a heroine for the ages, surely.

As a rival in business to the Collins family as well, my most amused moment came from the scene in her boardroom where portraits of her alleged forbearers (all her, naturally) are on display, chronicling her passage through the ages. My favourite of those was the Tamara De Lempicka art deco one depicting her as an Ayn Rand-like superwoman.

Still, she’s pretty goofy, and acts pretty goofy, even in a flick with ghosts, vampires and werewolves in it. I am sometimes surprised that I ever thought she was a good actor in the past, because more and more she just seems like someone who wouldn’t come off as credible in a pantomime.

Being a Burton movie, you know that everything’s going to look the way every Burton flick looks, whether it’s about Alice in her Burtonesque Wonderland or this here dayglo 70s gothic Brady Bunch mishmash. Everything’s pretty much as you expect it, and it’s the perfect video watch at home, unimpeded by expectation or intellect, unhindered by anything other than the desire to watch a silly story being told by silly characters in a pretty enjoyable manner.

Since I don’t give a damn about the original series or the characters or whether anyone actually loves this story or not (it’s hard to imagine that such people exist, but it’s possible), it leaves me free to laugh at or with Depp and his cohorts with nary a thought about whether any of it matters. I can’t imagine ever bothering to watch it again, but I might watch a sequel, the sequel threatened by the ending.

And if I do it will be in the comfort of my own lounge room, on the couch, hopefully drunk on something, because that’s the only possible place such a thing could be enjoyable.

--
“I am terribly sorry, but you cannot imagine how thirsty I am.” – polite to the bitter end – Dark Shadows