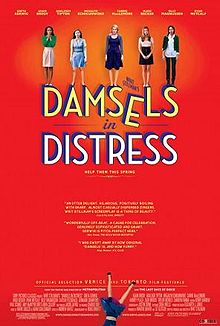 They're so ever so tiny and distressing

It's been ever so long since Last Days of Disco. Barcelona was an age ago, and Metropolitan, your first flick came out so long ago they've already put out 20th anniversary editions of the film. And now you've gifted us with another film to add to your in no way unique but still much appreciated genre of wordy upper class twits fumbling through life and live.

With Damsels in Distress, you're reminded, if you liked his previous films, of why you liked his previous films. If you hated the other ones, and I've spoken to people who think Barcelona was the most fucking obscenely tedious flick in cinematic history, and these are people who'd sat through some of Bela Tarr's eight-hour epics or Tarkovky's Solaris in single sessions, then Damsels in Distress will also fill you with that deep abiding rage you'd forgotten all about.

For me, it was like catching up with an old friend. Such an occasion can be both a good and bad experience. You're reminded of what you liked about them back in the day. You're also reminded that, with no 'present' between you, all you share in common is a common appreciation of moments distant in time, and that's just nostalgia.

There's no future in that. There is a future, hopefully, for Stillman, it's just that I wish his films didn't fall apart like cheap underwear at the end.

This film chugged and rolled along quite amiably for me for much of its length. I found it to be all the things you'd hope a Whit Stillman flick would be: witty, funny, wordy, pithy and pleasant for about half its length.

And then I think they ran out of money, so it just seemed to end.

Stillman, similar to that group of filmmakers from the 90s he is often grouped with, who had nothing else in common other than the American 90s arthouse scene like Hal Hartley, Jim Jarmusch, Kevin Smith, Richard Linklater, is that for a while at least, they seemed to be making very idiosyncratic, very personal films. When their actors 'got' what they were doing, they seemed to be embodying a very particular movement in cinema, giving hope to us all.

Then they repeated themselves ad nauseum, with the same tired quirks and fall-backs, same lazy actors and acting and the director's idiosyncratic vision and unique take on the world ended up looking like the stunted musings of artists trapped in their own intellectual basement. They ended up prematurely Woody Allening all over themselves and us.

Unfair, I know, but there it is. Damsels in Distress is a light, superficial confection that seems like it could be about something more substantial, but then says to us "no no no, I'm just as glib as I appear". Greta Gerwig heads the cast as Violet, a motor-mouthed prim and proper etiquette and deportment proponent at a fictional university called Seven Oaks.

I'm assuming that Seven Oaks is fictional. It has to be, because it’s less real than the universities in 80s comedies like Back to School and Revenge of the Nerds, parodied endlessly on The Simpsons and Futurama. It's meant to be like one of the last Seven Sisters colleges (like Radcliffe, Vassar, Brynn Mawr etc) to recently go coed. The drunken jocks dress as if they're preppie whitebreads, and the preppie whitebreads dress like they're in the 1950s. Violet's little coterie of like-minded girls lead a crusade of hygiene, tap dancing and attempting to help the suicidal.

They all, including their latest recruit Lily (Analeigh Tipton, who looks like a cartoon character brought to life, and I don't mean Jessica Rabbit or Bugs Bunny) have floral names. Violet, of course, Rose and Heather bring Lily in, perhaps because she looks lost, and perhaps only because her name earns her entry into a club that would have her as a member. She is a bit perplexed by the new uni, but she seems more perplexed by the sheer torrent of words that pours sweetly from Rose's mouth.

Rose has an opinion and a pronouncement on absolutely everything. She has created an elaborate system, that exists only within her head, of the way the world should work, as opposed to the way the world actually is. This system is not overly complex. They believe the forces of coarseness and impoliteness torment the lives of their fellow students, and that if they simply had more access to good soap, if they dressed better, and if they tap dance occasionally, then their problems will become far more manageable.

Since they are true humanitarians at heart, the girls also run the suicide prevention centre, despite the fact that they don't seem to have any qualification or experience in order to do so effectively. Violet is convinced that everything she thinks is probably true and that there's some kind of moral standard underpinning her stance which means that of course she's right.
[img_assist|nid=1692|title=So are you for it or against it?|desc=|link=none|align=right|width=450|height=336]
She dominates the group and the film, for much of its time, partly because she's quite charming, but mostly because she's always talking. She doesn't so much convince the people around her so much as wear them down with a steady stream of sweet-sounding doggerel.

Lily, being the new girl, substitutes as the audience surrogate, at first being blown away by Violet's winning ways, but soon coming to question Violet's grip on the group and on reality. Violet's lovely, and funny though, so at first we're just charmed into coming along for the ride.

The problem for the damsels is, of course, the distress presented by boys. Lily has her affections for a despicable Frenchman in a relationship (Hugo Becker), and Violet has her own fixation on a guy called Frank (Ryan Metcalf). Now Violet has a whole rationale as to why she focusses her affections on Frank, who is played as the 'full retard' Robert Downey Jnr's character in Tropic Thunder urged actors never to indulge in, but her friends and the audience find it beyond perplexing that Violet could love someone so transparently fucking stupid.

Frank is beyond what I like to think is a possible parody of a dumb frat boy, as is the only other person who seems even more imbecilic, being Frank's friend Thor, who is so learning disabled that he doesn't even know what names colours have. He's not colour-blind, he's just powerfully durp de durp de durp de doo. And not funny. But he’s going to hit the books, apparently, and that will make everything okay.

It's difficult to know what Stillman was going for here. These chaps in this otherwise light and cheery fairy floss of a flick are fully clothed and able to speak in sentences, but act like you're unsure whether they can handle their own bodily functions. It's one thing to say that frat boys at colleges might act boorishly similar to frat boys and girls at colleges (I've seen the videos, and I too lament the future of America's youth), but the satire goes beyond anything believable, even as it adheres always with Stillman's prissy ethos against coarseness or inelegant speech. There is, as well, in case we didn’t get it, a scene where frat boys in togas are invaded and conquered by the barbarian horde.

Is a civilisation destroyed from weakening from within, or from the darkness encroaching from the outside? The girls actually debate this in their flippant way, even as Violet thinks that if she distributes soap to these cretins, their lives could be immeasurably uplifted.

There is, seemingly one guy (Adam Brody) who isn’t a complete fuckwit, but the problem he raises, just by existing, is the question of identity. He has crafted his identity, Violet constructs hers, and her seemingly loyal friend of many years Rose also harbours an unterrible secret regarding her ‘true’ identity.

Past a certain point, Violet becomes, I don't think intentionally, a more pitiable figure, as her backstory is filled out and her actions are given a different, lazier spin. From here Lily strikes out away from her influence, intending to make her own decisions regarding life and love, and of course though they're mistakes, she'll be the better for it.

Although she’s probably going to have a sore arse.

And then some other stuff happens and then it ends. I was very much getting into it for much of its length, and then it kind of dropped the ball. The ending doesn't undo any of my goodwill, but it just felt like some of the last chapters of the book were missing. Violet, though clearly fucked up, is a delight to spend time with, and this adds another engaging character to Greta Gerwig's ever-expanding resume. She's good at embodying these characters, and giving them some substance, and she was more than wonderful.

Still, I couldn’t help but feel a little disappointed. I don’t doubt that dancing could be the cure for all ills, psychological or otherwise, but to have it cap off the flick as if it's an ending worthy ending with is a little trite. It's not that I wanted closure or anything as facile as that, but I did want something more at least.

Maybe that's a good thing? Maybe it will have to do, for now, until this director can come up with another pleasant preppie WASP fantasy for our delectation.

Welcome back, Whit Stillman. Would you like a drink? Sure, I can make a manhattan. Oh, and don't put your fucking croquet shoes up on my table. That's an heirloom you inelegant galoot. I mean really...

7 times some films end with a series of explosions, and some end with a polite yawn out of 10

--
"Do you know what's the major problem in contemporary social life? The tendency to always seek someone cooler than yourself." - if that were true I never would have gotten laid in my entire life - Damsels in Distress