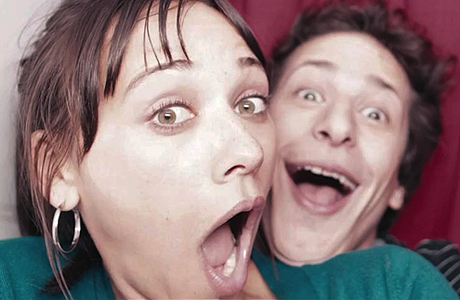 I guess you could call it a romantic comedy, but then how
many rom-coms start where the relationship is already
over?

We get to see the entire span of Celeste and Jesse’s relationship and marriage in montage over the opening credits, and by the time actors are saying dialogue, we’re shocked when a friend of the central couple, Beth (Ari Graynor) screams at them for still acting like a goofy married couple when they’ve been separated for the last six months.

It’s a shock to them, and it’s a shock to us, because, well, what were we expecting? They lulled us into a false sense of security, by representing their relationship one way, and then cruelly telling us it’s the opposite.

What are we supposed to think? What kind of romance occurs after the break-up? The messy kind. Celeste and Jesse Forever is really about two people who love each other and for whom being in a committed relationship doesn’t really work anymore, can’t work, no matter how many moments they individually and together get where they think maybe they should.

Real life intrudes, it always intrudes. The days where one of them thinks they should get back together is the day the other finds someone completely new out there in the world, and the possibility of having something with someone else sparks briefly. The next day, one of them thinks they’re never going to have it as great as they did with Celeste or Jesse, and this regret causes them to undermine what they have, with the hope that maybe they can go back.

Thing is, you can never go back, because you’re not the same person, or because they’re the same person they were when you left them, and no different result can transpire.

It’s a simplistic set up, in the beginning, in that, for all they comfort with each other and their clear love for each other, Celeste (Rashida Jones) is a hard-working, ambitious woman, and Jesse (Andy Samberg) is a lazy sack of crap. That’s not fair: he’s all creative and goofy, but unmotivated and undependable. Is it the main source of tension between them, or the key reason for the breakup? It comes across as such. In this era of relationship movies where delayed-adolescence man-boys are having to step up their game and mature over the course of a movie in order to get their happy ending, it’s certainly of a piece with those.

Of the two, Rashida Jones gets way more screen time, and way more to do. She outshines Samberg, but considering their characters, that wouldn’t be hard. She has more ground to cover, and since that’s how she co-wrote the screenplay, it’s not much of a surprise that she gets the lion’s share.

It also means, since she seems to be a very talented and self-aware performer, that she’s also happy to make her character the more unsympathetic one at times. When she lashes out at the people around her, or at Jesse, when she suspects that he’s not always going to be there like a loyal puppy dog forever, we understand why she’s doing it, and it doesn’t come across as narcissistic cruelty. She is a bit of a control freak, but, hey, every relationship needs one.

I wonder what it would be like for two high-achieving control freaks to be in a relationship together? It’d probably be something like the Obamas, and that’s a completely different story from the one we’re watching right now.

Six months after their break-up, Jesse is still living in Celeste’s bungalow, and it seems like he’d happily keep doing so forever. I mean, why move out at all? Rent free, cereal on tap, cable to watch, and his best friend since high school only metres away at any time. Sounds like deadbeat paradise to me.

The event that forces everything to change is a bit unfair, in that it decreases the agency of the characters, making them a bit puppetish. Jesse has a run in with someone who, in the words of the script, he’d had a ‘hit and run’ with a month or two process. In the process of these multiple collisions, he discovers that she’s pregnant, and he’s going to make a serious go of it, since it doesn’t seem likely that Celeste will take him back in the fullest sense of the word.

This of course sets Celeste on the war path, but also results in a lot of backsliding, drunken phonecalls and even more drunken, IKEA-influenced break-up sex, harsh words spoken in harsher tones, and a lot of confusion on Celeste’s part.

She tries to make a go of it otherwise, going on perfunctory dates or sticking to her daily routines, but the more settled Jesse becomes, the more obvious it seems that he won’t be coming back, the more she falls off the rails.

How do you show such a thing in an American movie? Drinking, lots of drinking, but it’s all of the harmless, inappropriate kind. She routinely seems to be drunk way quicker that anyone else around her, which is meant to be sad.

But it’s also meant to be funny. Look ,the film is funny, but it’s not a flat out comedy, and Celeste’s downward spiral is leavened with humour that doesn’t detract from the difficulties she faces with problems mostly of her own creation.

The moment I found absolutely funniest, even though it’s nowhere near the funniest part of the flick, is the very cliché but still much appreciated ‘inappropriate wedding speech’ which she delivers at her friends’ nuptials. Why it made me laugh is because of her delivery, as in, she opens with a joke: “How do you get a nun pregnant?” I don’t need to spoil the punchline, but the way she delivered the punchline had me in stiches, and to top that, when she gets one lone laugh out of the crowd as someone guffaws in the distance, the way she says “thanks, Reverend” finished me off completely.

I think Rashida Jones is wonderful in general, and she’s plenty wonderful here. It’s not an easy job to do, needing as she does to maintain our sympathies whilst risking them with every second thing she does, until we can see that she’s going to release her iron-fisted grip on life and the people around her such that she and they can breathe, a little at least.

The ending isn’t a redemption, a bowl of treacle or a happily ever after cop out, and yet it feels earned and sweet at the same time. They always find ways to undercut potentially saccharine moments, and they do it adroitly with humour and feeling. It was enjoyable to watch this ramshackle story, and a pleasure to see them come out the other side as, we hope, better people.

It breaks your heart when you see two people who love each other but can’t be together for very valid and unavoidable reasons, but you can also have the hope that they’ll find their way to some happiness and a different life away from each other, rather than clinging to the remnants of their old one out of fear, loyalty, or the memory of the love they shared.

And yet this flick still remains a celebration of love, because it acknowledges the aching loss without the melodramatic trappings or the ‘running to catch someone before they get on the plane’ bullshit, and it has space for the affection and goofiness two people who are close can still be a party to.

Mileage is really going to vary for people on this flick. I enjoyed it, but I didn’t love it outright. It had some pacing issues, and the whole subplot with the pop star Ke$ha / Lady Gaga pseudo pop singer didn’t do much of anything for me, and the facile way it was ‘resolved’ pointed to how unnecessary it was. Overall, I enjoyed it enough to recommend it to people who like watching movies about messy relationships and the stupid shit people do along the way to achieving some measure of harmony in their lives.

7 times love, love will tear us apart again out of 10

--
“No one has given a more self-righteous monologue while wearing a trash bag.” – surely someone somewhere has – Celeste & Jesse Forever.