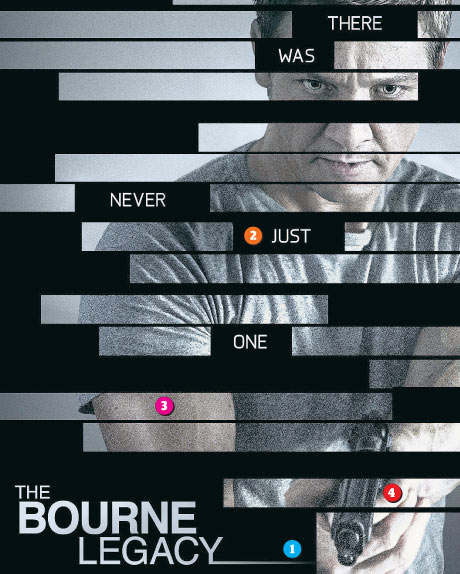 Maybe there should have been, only one, that is

The lazy joke going around when The Bourne Identity first came out was that it represented an attempt to make a James Bond-like spy film without James Bond. Now the even lazier joke could be that they're making Jason Bourne films without even having Jason Bourne in them.

The Bourne Legacy is a very transparent attempt to reboot the franchise with a new lead, but only whatever next flick they make in the series will tell if that works out, because this one is all set-up with no payoff. It doesn't even have the decency to come after the Matt Damon flicks. This is set almost concurrently, as in the events depicted here occur at the same time as The Bourne Ultimatum and The Bourne Supremacy. Goddamn those were pretentious names for kick-arse action flicks. So our new hero isn't following in Bourne's fading footsteps, he's walking in parallel.

This one, perversely, doesn't have Our Hero, gruntingly played by Jeremy Renner, do anything particularly Jason Bourneish until after an hour of film has unspooled. I mean, he does a few action-man type things, like jumping from the top of a mountain to another quite casually, but what we really associate these flicks with is: shaky camerawork, bone-crunching fist and foot fights and car chases. Oh, and amnesia, I guess.

Legacy changes the formula by a lot. In this flick the premise is that every boss has another boss above them. The shadowy-powers-that-be within the American intelligence community who tried to make Bourne's life hell for three movies have shadowy powers behind them, and so on and so on in an endless sequence of Russian matrioshka dolls. When the character Matt Damon sexily plays in the other films causes ructions and vexation amongst the CIA, it causes headaches and internal bleeding to the people who created him as the perfect flat-topped killing machine, who shamefully don't want the world to find out how they've been spending their days and nights.

We learn in this movie, lucky us, that there were other programs trying to create superspies in other ways. Bourne was created by special training and operant conditioning and such that would have made B.F. Skinner tear up with pride if he ever had human emotions, which I don't think he ever did. But another program, the one that concerns us here, provided superspy outcomes but with experimental meds and viral engineering. The embarrassment of Bourne talking to the world makes the presumed head of all these nefarious programs (Ed Norton) shake in his nancy boy boots. He decides that the only way to protect themselves from the rest of the government and the public is to burn all evidence, down to the ground, and salt the earth afterwards.

When it's paper and files and such, is easy to get rid of. Trust me, I've spent over half of my working life shredding documents, and there's something to be said for the pleasures of pure destruction. It's a little bit more problematic when the evidence to be destroyed is in the form of hulking superspies who are walking and talking around the world. These operatives have become used to taking pills continuously, so what's one more (last) pill to them?

Aaron Cross (Renner) is hiking around an extreme wilderness as the movie begins, looking like offcut footage from The Grey, that anti-wolf flick from earlier this year. Yes, Our Hero gets to battle wolves here, too. We keep getting footage from the civilised world, and from the previous films, outlining that people like Norton's character have already put this plan into effect offing people before this film began or the other ones ended.

A scientist who works at a lab that makes these super magical medications (Rachel Weisz) survives an attempt to clear house, and Cross, who is out of the medication he so desperately needs, tracks her down and volunteers for her to help him out, with the expectation that he'll keep her alive for a while longer. Their arguments honestly boil down to the morality of science. She, at least her character, when queried as to how she could be so oblivious to such a poisonous black ops program exclaims "I did it for the Science!" You can actually hear the capital S whenever she says it, and the analogy is drawn (though not underlined) that she is the equivalent of a Nazi concentration camp doctor experimenting horrifically on the helpless without considering the humanity of the subjects in the slightest. But hey, great results, team.

Bad Science! Naughty Science! But then in a twist I didn't see coming, and didn't really care about either, this particular superspy is actually a living Flowers for Algernon reference, being someone who's deathly afraid of reverting back to what he once was. It's also meant to give a bit of an additional jeopardy angle, since if he doesn't do whatever in time etc etc.

In case I haven't made it explicit enough, this flick actually makes a case that sounds queasily like the military took a retarded soldier hurt in a roadside bombing and made him a Bourne reliant on special medications to stay on top of the world. Does that make his case poignant, or a condemnation of Bush era recruitment policies, or just outright science fiction?

It probably doesn't matter, and neither do our supposed objections to the career of the scientist Cross saves and then exploits for his own ends (not sexually, of course). Although, you know, you could argue, why put that shit in there if it doesn't ultimately matter? The flick seems like it's saying treating humans like guinea pigs Is Bad, but then it says it can Be Good when it's required by the main character for the purposes of survival.

That's not shades-of-grey ambiguity or complexity: that's just convenience. It does lead to a very funny (for me) scene in a pharmaceutical producing factory in the Philippines. The scene is funny to me only for one reason: the factory's supervisor or head of security is played by Shane Jacobson. Now, Shane Jacobson is hardly a household name, but he would be known to most Australians as Kenny, the title character from the film about a portaloo 'technician' that amused us all for a brief period of time back in 2007. Now, the rest of us moved on, and so, too, did Kenny, apparently, moving on up to the heady heights of Big Pharma management, with a hefty Rolex and all.

It totally made me laugh out loud when I saw him, completely taking me out of the film, which is not a bad thing. It's hard to feel that much emotional investment in a flick that have all the subtlety of a neck punch, but I still like Kenny, working class hero to us all.

As an action lead I think Jeremy Renner can hold his own, and anyone else’s as well. He has a weird energy in this, which successfully differentiates him from Damon's take on a similar character. Since this was all setup, with sparing action for most of its length, it's hard to know what he'd be like in a 'real' version of one of these. This isn't marketed as a Part 1, but clearly it's all meant to be resolved in a future film, since none of the baddies (barring the insane guy they send after Cross in the last half hour of the flick) get anything close to a comeuppance. We need comeuppance, we need closure. Not only do we not get that, but they undo some of the stuff put in place by the last one, as a way of extending the threat posed by these nefarious intelligence bureaucrats.

Ed Norton is especially good as getting across the anxiety and nervousness of a bureaucrat who's fucked up and is willing to destroy everything in order to cover his own arse. He's no different from the other cold functionaries who've lorded over this cruel world in these flicks, but his tone brings a certain whiny hysteria to the proceedings, which I like for reasons I can't explain.

The action set pieces vary in intensity, and I would really argue that the flick only really delivers Bourne-like thrills in the last third in Manila, where it goes balls-to-the-wall, and when the camerawork goes berserk too. The rest, including a too long sequence at the scientist's house where a CIA hit squad are trying to stage her suicide are okay, but they're not up to the level that we've come to expect in this series. As a consequence, when the flick ended, I was actually completely taken by surprise, thinking "Wait, what? It's finishing here?" It's nice to be disappointed in that way, in that as long as you want to see what they do next, it's not a complete waste.

At the risk of sounding churlish, I reluctantly point out that if your plan as an Evil Empire stringpuller is to cover up your Evil Empire stringpulling, and you send out a kill-crazy supersoldier to kill your target, being Cross and his pet scientist, to the mean streets of Manila, that perhaps you're being somewhat counterproductive? These geniuses led by Ed Norton perhaps are making things worse when they have a guy go bugfuckingly berserk in daylight in full view of the public, which does the opposite of cover up their actions in trying to hide the existence of some other supersoldier.

And no-one ever tells them "Um, is this the best you geniuses can come up with?"

This flick feels like an incomplete experience, but that won't matter if the next one is up to scratch. Only then will it get its chance to stand on its own two feet and proclaim to the world that there is a point in making and watching more Bourne films. And then in the third one in the series, Jason Bourne can come back and after initially fighting against each other, Our Heroes take the fight directly all the way to the White House, where they take on a robot version of President Romney in a pudding fight to the death.

I can't wait for that one