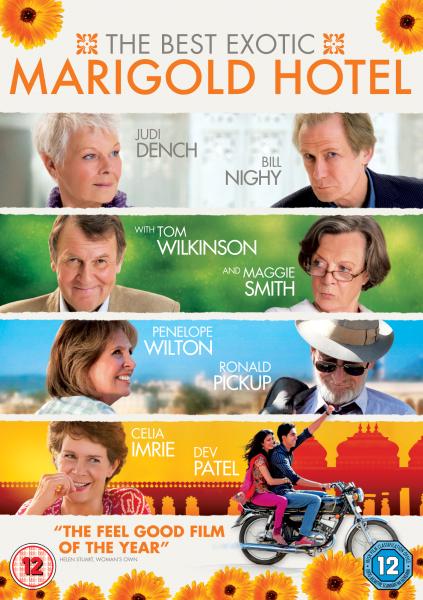 Movies for oldies. Why not? Many of them have oodles of disposable income, and they’re as keen about being pandered to at the cinema as much as anyone else is. Plus, cinemas like my local arthouse Cinema Nova needs something to play on Mondays to make the oldies queue up like they’re offering free flu shots.

This niche is a pleasant enough niche, smelling as it does of casseroles, Vicks Vaporub and unwashed dishes, and it often results in some very excellent films, not all of them being Merchant Ivory productions. Sure, they don’t want to startle the old folks with anything even mildly shocking, so these flicks tend to be fairly safe and pedestrian affairs, but that doesn’t mean they are lacking in beauty.

On some levels I was watching this thinking “I should hate this and everything it stands for”, but the actors involved are too good, and the episodic, sometimes haphazard nature of the narrative are woven together well enough to overcome the hokeyness of some of the material.

A random collection of British oldies somehow either choose or are compelled to end up at a rundown hotel in Jaipur, India. Jaipur is also known as the Pink City, not that that illuminates anything for the dear reader. The idea, from the perspective of the superannuated, is that however much or little money life has left them with, they should be able to run our the clock in semi-luxury without having to worry about ending up in one of those state-run old folk’s homes where they bathe people in petrol to keep the leprosy at bay.

When they arrive, coincidentally at the same time, they are shocked, SHOCKED to discover that the place is nowhere near as opulent as the internet led them to believe. Naughty internet for telling porky pies.

The motley crew of oldies includes an unrepentant racist (Dame Maggie Smith) in town for a hip replacement operation, a widow who’s never really ‘lived’ (Dame Judi Dench), a retired judge who longs for a lost love (Dame Tom Wilkinson), a crusty old womaniser (Dame Ronald Pickup), and two Civil Service retirees who clearly hate each other and hate all of life because the internet made them poor (Dame Bill Nighy and Dame Penelope Wilton). There are probably some other people, but really, do they matter compared to that list of great dames?

With a large cast, it’d be a bit much to expect that each of them could have well developed characters and the time and opportunity to ‘grow’ them over the course of the film. There’s no time for that. What you do instead is get a bunch of great, great actors (Dench, Wilkinson, Smith), and a few okay actors (Nighy etc) and you let them free to do their thing, bringing decades of experience and our collective goodwill to their roles so that all the heavy-lifting is done by will alone. With the least amount of time necessary, they’re able to imbue their characters with depth and meaning which belies the actual time devoted to encapsulating them.

Tom Wilkinson especially stands out in a flick where Judi Dench and Maggie Smith are no slouches either. His character’s return to Jaipur is prompted by the need to resolve something from his younger days when he was lording it over the locals and shooting punkawallahs from elephant back in the halcyon days of the Raj. His whole life after India, eventually working as a high court judge, is nothing compared to his need to find out what happened to someone he fell in love with as a teenager.

His story, and his gentle bearing, his struggles with bribe-necessary bureaucracy all manage to tell his story and impact on the stories of the other denizens of this ill-fated hotel. The female half of the Civil Service couple has a thankless role, and does and says a lot of horrible things, but the one that’s meant to disgust us the most is the obsequious way she sucks up to the judge, calling him Your Honour all the time to acknowledge him as their obvious better. The gentle, weary way in which he tries to deal with her is strikingly poignant.

She, Jean, is a hateful harridan who loathes all of India, especially the parts around her, but she feels as if she can appeal to the judge’s patrician side, then she’ll have an ally against the forces of unclean darkness. He, on the other hand, loves the place down to his bones, and watches her behaviour with a mixture of incredulity and, thankfully, pity. He doesn’t have the time or the focus to devote to showing her the error of her ways, because, really, he’s got the questions of a lifetime to resolve, none of which I’m going to spoil here. With scant screen time, he wrings a lot of meaning in every scene he’s in.

It’s sobering, and a little bit humiliating to watch the dressing down she gets. If you’ve ever been the one on a trip who’s the cloddish stick-in-the-mud, as I admit I’ve been, afraid of leaving one’s comfort zone, afraid of seeing what life is really like in some of these places because of laziness or general stupidity, then it’s a painful reminder of what you look like to the other people embracing life and living without whining too much.

Judi Dench plays Evelyn with a mixture of naivety and optimism that she pulls off expertly because she’s goddamn Dame Judi Dench, okay? Evelyn is recently widowed, and now feels the effects of her horrible, horrible freedom. Her life at home perhaps constrained her from experiencing much of the world, but, once the husband’s gone, all bets are off. No, it’s nothing like that at all. Evelyn’s husband’s death leaves her financial worse off than before, this is her first trip and possibly last trip, and she even starts working at a call centre in Jaipur for something as shameful as money.

That’s a turn-up for the books. The next time you get that phone call at around 7pm with something saying to you in a strong sub-Continental accent, “Good evening sir, I am Joan from the South of Melbourne, and I would like to talk to you about electricity”, it could actually be the one Brit they have on staff.

Even if it’s hard to believe that a call centre entrepreneur would hire Evelyn to coach his vile operators into being better con-artists, the story veers slightly by getting Evelyn to represent, indirectly, how the simple template these people follow can sound so inhuman to someone who is grieving. It becomes more about her grief, the grief she hasn’t resolved yet, that it does about appropriate phone manners (though it couldn’t hurt them to take some lessons, the mangy curs).

Maggie Smith is a peach in this, oh, what a peach. In pain and constrained in her movements due to the hip replacement, she has nothing but disgust for the Indian people around her, and makes no bones about loathing the place. She’s obsessed with the biscuits and delicacies (like Bovril, Marmite, all those London-during-the-Blitz type ‘luxuries’, and cares not one whit for whatever the locals have on offer. Unlike many of the regal characters she often plays, like Professor McGonagall in the Harry Potter flicks, or the Dowager Countess in Downton Abbey, she’s a salt-of-the-earth type here, with no pretentions of class superiority, and plenty of racial invective.

Her experience being what it is, though, she’s the one who sees the staff in the hotel as actual people, people she doesn’t like, but people, rather than the ‘untouchables’ they are referred to as by their countrymen. In an admittedly strange aside, her mildest acknowledgement of a dalit girl’s existence leads to a visit to a family where cross-cultural understanding doesn’t increase, but it does change the mind of the character to some necessary level. Of course she’s great in the role, she’s Maggie Smith, for crying out loud.

All the characters have their stories, of course, and they all have ways of either endearing themselves to us, or disgusting us with their small-mindedness and arrogance. Not all of them are that interesting, or the path they’re on doesn’t afford us a lot of interest or purchase. But overall the effect is a positive one, since my feelings towards the film, the way it’s shot, the beauty of Jaipur and the surrounds help, and the character arcs for the important characters feel at least like they were stories that deserved telling.

Of the Indian cast, Dev Patel as Sonny, the spastic hotel manager who keeps a steady stream of patter and bullshit constantly on the go, is perhaps a bit over the top, but I generally found him quite funny. He’s less a character and more a delusionally loud force-of-nature, but even he manages to achieve some dimensionality when we see that he doesn’t always believe his own bullshit. His remarks, though, taken alongside the reality of what the hotel is like, are sometimes staggering in the magnitude of their denial. He has the expected kind of story arc whereby he’s trying to make his disapproving mother happy, be a business success like his brothers, keep his girlfriend happy and stop her brother from killing him, achieve the dreams of his dearly departed father, and probably get laid at some point. He flusters and barrels about like a slightly more manic Basil Fawlty, which is no insult to either of their legacies.

It’s not an Indian movie by any stretch of the imagination. Ninety-nine per cent of the focus is on the British cast, and most of them and what they get up to is fairly enjoyable. I laughed, I thought about it a bit, and I enjoyed it far more than I ever expected to. Unlike most of the expected audience, I also stayed awake for its entire duration, so I’m in prime place to say: Marigold Hotel? It was all right.

--
“Let me through, my brother is a doctor.” –that’s got to rank up there in logic with ‘you’ll have to speak up, I’m wearing a towel’ – The Best Exotic Marigold Hotel.