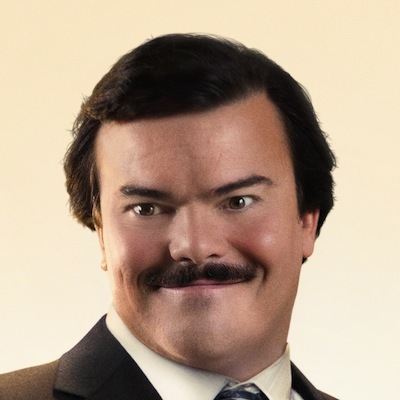 Phwoar! I'd give him my power of attorney any day!

Well, that was weird.

I am unsure how much of this flick is a flick and how much of it is documentary, since there is a lot of footage that doesn’t seem to be footage of actors acting.

Let me be blunt by pointing out something very secret, almost unheard of: American tv and cinema is a very discriminatory, very harsh environment. It is cruel and unforgiving. The tyranny of the slim and gorgeous is absolute in this form of media. As it should be.

I say this as a staunchly unattractive man myself, so don't go thinking that I think I'm some lithe, brutishly handsome mash-up of Benedict Cumberbatch, Chris Hemsworth and Tom Hardy. Far from it, sadly, far far from it, though it's an intriguing combination, as opposed to the rather actual combination I possess: sad old boot, wildebeest, wobbegong shark and afghan rug that genuinely comprises my DNA.

No, my point is essentially that American movies never usually have this many incredibly unattractive people in the one place at the one time unless there's a damn good reason. Plenty of other countries make movies with less than attractive people in them. British cinema seems entirely dedicated to bringing unattractive actors to the forefront so we can all gawk at them like we're looking at the freaks at a particularly anachronistic carnival.

They are all here for a purpose, a dubious one at that. They're here to keep things real. They're here to emphasise the reality of the story they're talking about, because when it's average looking humanoids, you know it's got to be 'real'.

But here's the real kicker: they are 'real' people, as in, there are people in this film who actually knew the subject of the film, being a guy called Bernie, obviously, and they talk about him all the time, and this is interspersed with Jack Black playing the character for our entertainment and edification.

Confused? I still am. It's not a documentary, at least, as far as I could tell, any of the scenes with obvious actors in them were not scenes shot for a documentary. But the film uses so much interview footage that clearly doesn't have actors talking, that the line between the two forms is a fine one.

There's no difficulty realising that Jack Black is playing a character though. He plays pillar of the community Bernie Tiede, a mortician, passionate Christian, closeted gay man, singer and show tune lover (possibly tautological). He has a moustache, and a strange manner. It's strange to me, but not to the people around him, apparently, who think he's the bee's knees.

It's strongly implied, no, not implied, outright stated that Bernie is a magnetic people person, despite his appearance, who will do anything to be liked or even loved by everyone he comes into contact with. His role at the funeral home and at the actual funerals brings him into contact with people at their saddest, at their lowest, and he is adept at stepping in and offering the shoulder, the handkerchief, the consoling words that make a difficult time easier for all concerned.

He's great at it. He seems to glow with love for other people, and for Jesus, naturally. Of course, since it's Jack Black doing it, it seems so false and insincere, but after a while I did begin to buy that this character, and he is a character in every flaky sense of the word, genuinely was what he aspired to be and what he portrayed to the world.

This story mostly transpires in the town of Carthage, Texas, where you'd think a portly effeminate firecracker would hardly rise to become the belle of the ball, but the constant interruptions of talking head interviews with people who knew the real Bernie forces us to consider the possibility at least. They're entertaining, and welcome, but I couldn't help but feel that they were somewhat lazy as a storytelling device. The only approach lazier would have been a stately voiceover constantly telling us how awesome and complex Bernie was, instead of making a film that, through its story and its performances, convinces us of the very same thing.

As it stands, there's barely any actual 'film' that isn't interviews and pseudo-interviews in the first 30 minutes. It's not a great way to be seduced by a movie.

A lot of people who've seen this (let's not pretend that a lot of people, though, have or will ever see it) look at Black's performance and call it the performance of his career. Sober critics have said it. Drunken reviewers have said it. I find his presence off-putting and his performance strange, but it's in keeping with everything he's ever done, only more so. Whatever the hell that means. Well, what I mean is that we bring an expectation to the film when we see Jack Black's head on the poster. We feel a certain way, if we've seen him in stacks of stuff, whereby we're expecting there to be something comical in whatever he does.

So his singing of godbothering hymns or other songs, inflected as it is with his Vegas-y over-the-top stylings, makes us chuckle whether it's intended to do so or not. I have to believe they expect it, so it means he's potentially distracting and compelling at the same time.

Bernie's path through this beautiful life brings him into the sphere of influence of one godawful old woman played by Shirley MacLaine, who, at this point in her career (and for the last thirty years), only plays mean old ladies. This woman Marge is very wealthy, but loathed by everyone around her. She seems to loathe everyone around her too. It wouldn't matter to the world and to a community, except for the fact that she's a tremendously wealthy woman.

Do we know if this is what draws Bernie to her? As he's consoling her on the loss of her husband once she is widowed, is he doing his usual routine, where he genuinely tries to offer treacly condolences to the bereaved, or does he have that longer-term ulterior motive?

We're never going to know, despite what eventually happens between them. Plenty of people, even the people that think he's Jesus reborn as a dwarf sumo wrestler crossed with Wayne Newton, think he's gay, and yet other's think his relationship with Marge is of the Harold and Maude variety.

I don't know and I don't care. The thought of the two of them getting it on in the biblical sense (as in, the Satanic Bible) is not a pleasant one by any stretch of even the worst pervert's imagination. With all the plastic surgery and other interventions MacLaine has had, she looks frightening, and the thought of any part of her rubbing up against any part of Jack Black is deeply, deeply disturbing.

Not that it's a particularly complex layering of the story, but whatever the talking heads recite isn't supported by what we are shown, because at every step along the way Marge severely rejects any physical contact that we see between them, even as he seems to be sacrificing all his time and energy in her service.

We are shown a picture of a relationship. It's a perplexing snapshot, but it's not incomprehensible. A strange needy man gets involved with a cantankerous wealthy woman. She showers him with financial reward, and they travel the world together in luxury, but he becomes a prisoner of his own desire to be of service, or the fear of not having access to her riches. When her demands become too demanding, and the metaphorical bars of the gilded cage around him start to solidify, he seems to reach a limit that even a saint would’ve have reached a long time ago.

On his side of the acting fence, he seems like a well-realised character. It's a self-serving argument, though, because the picture we get of Marge is very one-sided. She doesn’t feel like a real person, just an ailment, or a condition, or a tumour. It might not have been a problem except for the fact that the film is determined to make us side with Bernie in whatever happens. We are meant to see that his actions are those of a much beloved, larger-than-life but still reasonable person pushed too far, who is almost justified in whatever he might have done, because it wasn’t for his own gain that such actions were taken, that such a path was walked.

To put it mildly, that’s bullshit, but it’s a pleasant enough form of bullshit. About the only dissenting voice in the film is that of Danny Buck Davidson (Matthew McConaughey), a district attorney in this shitkicker part of East Texas that thinks it’s better than the rest of Texas. He never bought the reality that Bernie was able to get other people to believe in. He is astounded by the townspeople on Bernie’s side, perhaps even disgusted. He clearly saw in Bernie something that the rest of us not under his spell could easily see: that he’s human, and humans sometimes do fucked up things for reasons that seem reasonable, but are still wrong and worthy of the Long Arm of the Law crushing them for their hubris.

The film may seem to have a strange point of view, or purpose, but it’s still an interesting experience. It’s not laugh out loud funny, but I did get a fair few chuckles. It’s referred to as a black comedy, but I don’t see it as being either that black or that comedic. It’s not an example of cinematic advocacy, where the story is about an injustice or a wrong that needs righting. All the same, it’s kinda strange to watch a film with a good performance by Jack Black whose purpose seems to be to say, “This guy you never heard of who did something really bad: Was it really that bad? Oh c’mon, was it? Oh c’mon…”

--
“The jury had more tattoos than teeth and not a brain cell among them” – ah, the system of trial by a jury of one’s peers works perfectly, then - Bernie