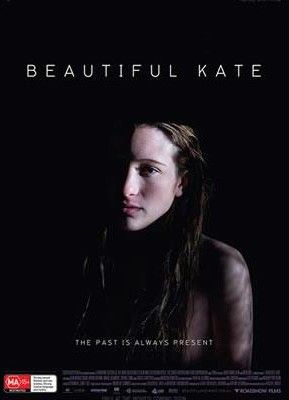 Ned spends most of his time, for our benefit, daydreaming in flashback form, remembering instances from his earlier days, and remembering the Beautiful Kate of the flick’s title. That she’s no longer around is obvious from the start, but something much darker lurks at the edges of Ned’s remembrances, which explains over time the sources of Ned’s guilt and anger towards his father.

In all these flashbacks, there are two constants: an almost palpable longing to see his beloved fraternal twin sister Kate again (Sophie Lowe), and the perpetual tyranny of angry dad Bruce, who bellows and hectors his two sons throughout.

See, Ned had another brother too, Cliff (Josh McFarlane), who also doesn’t seem to be amongst the living any longer. What could it all mean?

It would be dishonest to depict any of what happens as a mystery, since there’s no mystery, either to Ned or to us. It’s pretty obvious early on what might have happened and how/why, but the question becomes less what happened and why, and more who knows about it. The revelations are less than revelatory, but what they amount to is whether the members of this family, the remaining ones at least, can forgive themselves and each other for stuff they did or didn’t do.

In probably the weakest element, a fracture has to occur in Ned and Toni’s relationship, and it has to be prompted by the laziest and least believable conceit in the book. I don’t mean the book as in the novel the screenplay is adapted from: I mean the ‘book’ from whence all our most popular clichés come from. The problem isn’t that it’s a cliché (put simplistically, a writer who’s writing about doing some stuff that even libertines and reprobates would frown upon, leaves his writing out for anyone to read makes him look dumb and insults our intelligence), it’s that it’s a lazy way out.

The casual racism isn’t much of a problem in terms of my tender sensibilities, but there is something strange as to the way the native Australians living near the property are referred to as the ‘blacks’ (or thieving blacks at that), who only play a part in the script as a way for Toni to be able to leave the isolated property in order to get away from Ned. But then it’s undone by the way one of the main characters, being Sally, lives only to look after the kids at the nearby community, and play the saint at home.

That Bruce is always an arsehole, and an unrepentant one at that, both in the main story and in Ned’s flashbacks, isn’t a problem in terms of the story dynamics. Ned hates his dad and blames him (unfairly, as we come to realise) for everything that went wrong, and so his memories are entirely subjective. Family dramas of this sort always hinge on both some kind of closure and people coming together to accept each other’s awesomeness / shortcomings, but here it feels substantially different. Ned still hates his decrepit dad so much that he wishes he could kill him himself, and Bruce hates Ned for abandoning him. Their ending isn’t going to be one where the truth sets anyone or anything free, bringing understanding and compassion, and it’s nice that the flick doesn’t go that way, even as it seeks an ending we can live with.

The performances across the board are excellent, with characters (excluding the Cliff character, who’s more a piece of occasional furniture than anything else) that feel lived in, with all of their edges intact. I’m not sure what it’s like to be an actor being directed by your partner, but Bryan Brown seems to be doing fine, and, for my money, earns back some respect for the debacle that was his performance in Burz Lunkman’s Australia. We can’t blame him entirely for that flick, and it seems unfair especially since Ben Mendelsohn was in it too, but I have to blame as many people as I can. It’s the only way I can sleep at night.

Playing an old angry dying guy maybe isn’t that hard, but Brown does do a solid job, looking genuinely frail and deathward bound. I only hope I can be as wicked and selfish when I grow old. Put him in a home when it comes time, Rachel.

Ben’s great as always, but his character isn’t that different from a number of other roles I’ve seen him assay to date. Still, his character’s a bit of a cliché, I’m the first to admit, but he brings the right amount of pathos and anger to the role. I really did feel for him as he sorted through the fucked up threads of memory that drew him inexorably to his own role in everything that went so horribly fucking wrong.

Sophie Lowe is more of a heartbreaking apparition; a fey, almost malign presence that flits in and out of Ned’s field of vision as he overlays what he sees at the family property with the memories that the locations conjure. Invariably, they’re visions of Kate, and ninety per cent of that time, they are impressions of laughter, light and love.

But, of course, it wouldn’t be a flick about the repercussions of fucked up decisions if she remained a vision of pure light, and here is where sensitivity and candour on Ward’s part come into play. It feels like a mistake to ‘gender’ something like filmmaking, and to decry or applaud something in a flick based on the sex of the director. All the same I know that I feel a hell of a lot more comfortable with certain scenes in this flick, dealing as they do with not only adolescent sexuality, in all of its confused and incestuous glory, but with some stuff almost too fucked up to contemplate, that I have more acceptance of knowing that Ward made the right choices. I might have not felt that with a male director, because I can easily see accusations of prurience or exploitation with a different director and the same actors, or even the deliberate decision to excise some of the material because it would fall into the too-hard basket.

The material still remains disturbing, and so it should. If it wasn’t difficult, then none of Ned’s problems dealing with his family stuff would have any believability or resonance. It’s not a case of relating to the material, since I hope that the vast and almost absolute majority of people who ever see this flick never relate to the material personally, seeing as it would require similar histories. But if we’re to take anything of meaning away, we have to believe that they’re struggling with genuine emotions.

The crucial scene towards film’s end, revolving as it does around a conversation between Ned and his younger sister Sally, is beautifully handled, both in terms of direction and by Rachel Griffiths. She underplays the delivery in a simple and heartfelt manner, which I thought suited the character, and tied up the flick in an appropriate way. It couldn’t have ended any stronger than Ned’s last line to Sally. Yeah, it had me in tears, but the whole fucked up family saga tugged a whole hell of a lot at the old heart strings, in ways that never felt manipulative or unearned.

There are always going to be complaints about public funding in Australian flicks, but I’m not going to complain if the flick is this strong and avoids pandering or pimping out for foreign audiences or Australian audiences. The origins of the story don’t preclude this from being a solid flick, Australian or otherwise.

--
“Youth is beauty, and beauty is youth” – tell it to the judge, ya old creep - Beautiful Kate.